Spokane’s burlesque troupe is exposing itself to wider audiences. 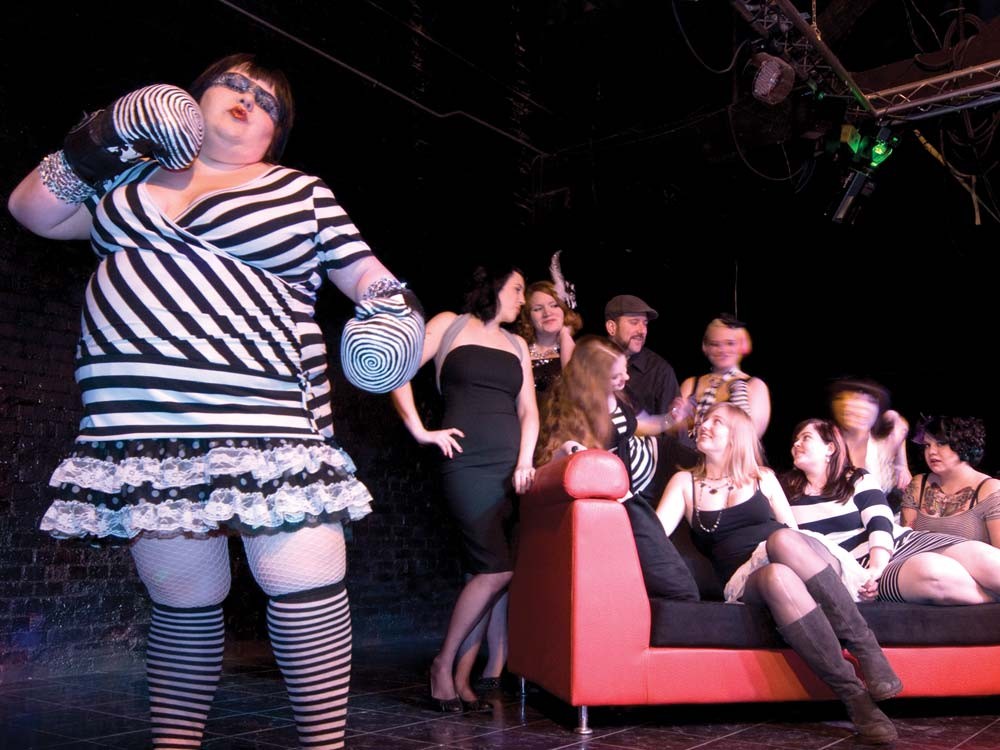 Loretta Surma
The Divine Jewels delivers a punch with Pasties and Paddles.

Jewels Dietrich delivered an ass-slap to Spokane four years ago when she founded the “punk rock burlesque” troupe Pasties and Paddles. And in the years since, her group has pushed the boundaries of performance and taboo — challenging audiences’ sexual stinginess and body image hang-ups with buckets and buckets of glitter and hordes of girls (and guys) in pasties.

Dietrich (more commonly known by her stage name, the Divine Jewels) has pushed her grassroots group to become more like professional theater: Pasties and Paddles, today, has its own light and sound staff, set designers and backstage managers. But the performers — like those in most burlesque groups — still sew their own costumes by hand and cut and stitch their own pasties.

“There’s no place you can go to buy a 6-foot-tall vagina dress here. You’ve gotta make that yourself,” she says.

This month, Pasties and Paddles may get its biggest boost yet, as it moves its act from the small bar stages at Irv’s and the Lion’s Lair, where it has performed most of its regular shows, to the big stage at the Spotlight Lounge, a venue that has room for more than 300. Their first performance in the new space will be this weekend’s Black and White Burlesque Show, which will feature everything from Alice in Wonderland routines to “cake in the face,” from clown acts to foot fetishes.

Dietrich says the new venue could pose some challenges. “[What] changes is the height of the stage,” she says. “You feel like you’re out there by yourself. You feel a little bit more exposed.”

But Dietrich adds that Pasties and Paddles fans, unlike theatergoers, are usually right up near the stage anyway. “It’s not a sit-down burlesque show,” she says. “When the girls are shimmying glitter, you’re going to get glitter on you.”

As it moves to a bigger space, the performers — Dietrich refers to them as “my girls” — has also started to get attention from established burlesque troupes in other cities.

“Portland and Seattle have asked us to go there,” she says. “The tighter the show gets, the easier it is for us to take it elsewhere.

“I’ve gone to other shows in other cities. They stick more to the traditional burlesque, if you will. We’re becoming more and more a burlesque-slash-performing-arts group.

I’m fine with that. I think the more we can cut open the box, the better it is.”

Dietrich says that when Pasties and Paddles first started, she had to define burlesque more often — lots of people thought she was leading a group of strippers.

“I think it’s comical that people see me as a stripper,” she says. “I have no problem with strippers — more power to them. I think the difference between burlesque is all the razzle-dazzle of it all: the costuming, the music, the theatrics. You take down all those things, it does come down to stripping. I’m fine with that.”

“But I think the definition of feminism is a female doing what she wants with her own body. That’s my choice."