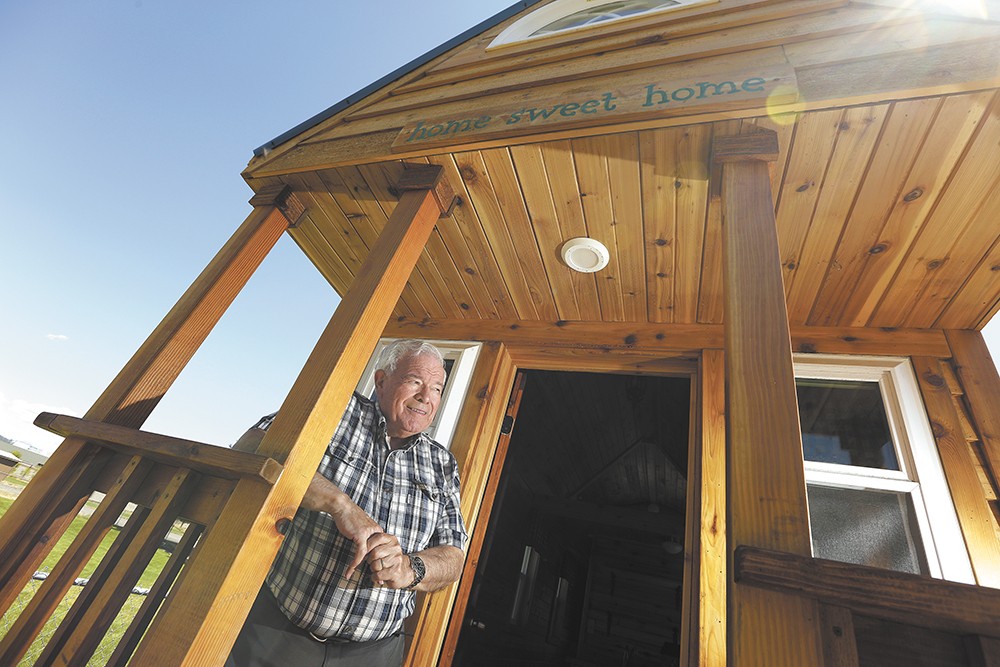 Young Kwak
"This is a thing that appeals to Republicans and Democrats," says Ian Robertson on his planned tiny-house village in Spokane Valley.

When Dusty Hester looks at a tiny house,

she sees more than that. She sees another chance. She imagines reuniting with her teenage son. She pictures herself living in a place she can be proud of, and one day owning it.

It's an opportunity that seemed impossible just two years ago, before Hester was clean. She became addicted to opioids in the early 2000s following a car accident, she says. Eventually, she started using meth, then heroin. By 2013, she was in jail for trafficking stolen property — a felony. With her health in decline, her son was concerned. She remembers him asking, "Mom, can you get clean? I don't want to go to your funeral."

Next month will mark two years clean, but Hester is still having trouble getting back on her feet. She lives in a women's sober house and her son, now 15, is too old to live there with her. Though she has a full-time job, she has trouble qualifying for an apartment, or finding one that would be suitable.

"I could go out and get an apartment, after I found someone to rent for me," she says. "But I don't know if it would be a safe environment or safe community for my child."

Hester was one of the first people to apply to live in a tiny-house village in Spokane Valley — for the chance to "reunify our family and be able to move forward."

Right now, she doesn't know when that will start. The village is still waiting for funding and a change in zoning laws before construction can start on the tiny homes in a church lot in Spokane Valley.

Ian Robertson, the man spearheading the project, is confident that can happen soon. And he doesn't plan on stopping at one tiny-home village. He thinks tiny homes can eventually play a major role in combating homelessness in the entire Spokane region.

The idea seems to be gaining traction among community leaders on both sides of the political spectrum. The Spokane City Council recently passed a resolution in support of tiny houses, and members of the Spokane Valley City Council have expressed support as well.

Hester, meanwhile, is sold on it.

"The possibilities that it gives people that have made mistakes in their life — it gives them a chance to not only have a nice place," Hester says, "but their own home."

The region's first tiny-home village would be located in what's now a few acres of brush off Broadway in Spokane Valley — in between Living Hope Community Church and Interstate 90. If you passed by the church today, you'd see one tiny house, empty for now.

Robertson says the goal is eventually to build 20 tiny houses, the largest model being only 344 square feet, along with a village store and a guest house next to the already existing playground. Each house would cost somewhere around $20,000. People would lease the tiny homes for $330 per month until they owned them in five or six years. At that point, ideally, their life would be back on track, and they'd be homeowners.

"If you'll take responsibility, it can be yours, and you won't be paying rent until you die," Robertson says.

The tiny houses would be built to high standards. There's a full kitchen, a small entertainment center, an oven, stove, bedroom, and in the bigger models, an upstairs bed for kids. The village would have fruit trees, a recreational center and a communal kitchen.

To qualify, a person would first have to demonstrate a need for it, and also have a way to make the mortgage payment. They would sign papers agreeing not to use drugs, not to drink alcohol, and not to partake in any violence. Someone will live on-site to make sure nobody violates this policy. If someone uses drugs, they would be sent to rehab and welcomed back when clean.

Robertson says he had someone like Hester in mind when coming up with idea — a working, single mother trying to get on her feet, with a kid who needs a home. He notes that Central Valley reports more than 800 homeless students in the school district. Another applicant for the tiny-home village was a manager of a convenience store who lost his job, has three children and can't get a job that pays more than minimum wage.

"Within five years, I expect some will love it and want to stay. Others will buy a lot in some other place, move into that," Robertson says. "When they begin to dream like the rest of us — there's gotta be more to life than just housing and work."

Robertson, a pastor, has worked for years on the plan to try and help the growing number of homeless families in the area. He's poured his own money into the project so far, and will need some help to fund the rest. He's not asking the government for money. Instead, he's asking foundations, who he says are ready to jump on board once it becomes legal to build tiny homes on the lot.

"We have got to do something to bring hope to these people," he says.

AHEAD OF THE CURVE

If you go by Spokane Valley city code, tiny homes are nothing more than RVs, which are not allowed on residential property for more than 30 days. Pop the wheels off and they're dwellings, also not allowed on church property.

The city, however, is in the process of updating its comprehensive plan. So far, the city council has seemed more than willing to change the code and allow for tiny homes. Councilmen Arne Woodard and Ed Pace both visited the site weeks ago and came away with positive comments.

"It's one way to get people started and be the productive individuals in the community that we'd like them to be," Woodard said.

"As far as I know, we are the only homeless service in the Valley," says Angela Slabaugh, executive director of Hearth Homes, which provides transitional housing to single mothers and children. "I think it's because of the mentality that homelessness is downtown [Spokane], and services are downtown, so they focus all services on the city. The unfortunate aspect is there is homelessness throughout suburbia."

Slabaugh has doubts that tiny homes could serve the same population as Hearth Homes, though she's interested in seeing how it will work out. Moms, she says, need space — a room of their own, a sanctuary away from the kids.

Tom Robinson, a member of the Spokane Homeless Coalition, says that if a village of anything tiny is going to be built, it should be tiny huts, not tiny houses.

Building huts — essentially, a room without the amenities of a tiny house — is cheaper and serves a population more in need, he says: "The people who can afford a $20,000 house are not a group of homeless people most in need of housing."

Pace says he's seen resistance from some residents who don't want the tiny-house village to lower property values, but he sees it as a property rights issue: People should not be forced into homes bigger than what they need. The Valley City Council is on board with Robertson's tiny house village, in part because it's not a handout.

"We don't want to give them money," Pace says, "but we want to create the right laws and zoning and stay out of the way."

Area leaders are keeping an eye on how Robertson's idea will play out. The Spokane City Council passed a resolution earlier this year encouraging tiny houses in the city, for alternative housing or for a "simpler lifestyle." Councilwoman Karen Stratton says the city has studied how tiny houses have been used in Seattle for various purposes, for the homeless or college students in need of housing. She says she'll be watching how it works in the Valley.

"I'm excited to see that we're at least considering the option," Stratton says. "But I think, if done right, with the right people involved and the right locations, it could be a win-win." ♦