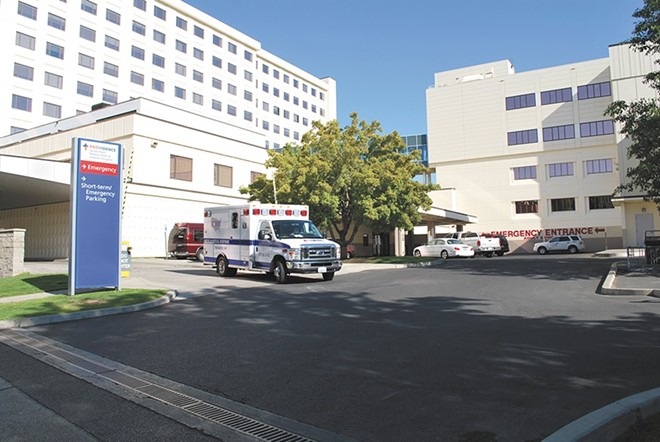 Dozens of patients linger in hospitals like Sacred Heart even if they don't need to be there.
In hospitals across the state, patients who have no acute medical needs languish in hospital beds anyway, sometimes for months or more than a year.

It's a problem the Inlander covered back in October: There's a lack of resources for patients — often those with dementia or behavioral health needs — and so instead of finding a placement they're stuck in a hospital bed.

But there is one fix that could help, Washington hospitals say. They want to speed up the process of assessing a patient's eligibility for long-term services and supports. That's exactly what proposed state legislation — HB 2597 and SB 6275 — aims to do. Specifically, it would allow hospitals themselves to provide "pre-assessment information," and then put a timeline on when the Department of Social and Health Services staff should complete the assessment.

"The hospital is not a place where anyone should live," says Chelene Whiteaker, senior vice president of Government Affairs for the Washington State Hospital Association.

The Washington State Hospital Association supports the legislation. Currently, the association says, it takes DSHS an average of four weeks to even start an assessment on a Medicaid patient to see if they're eligible for long-term care. Then it takes several more weeks to complete it. All the while, patients are waiting in the hospital.

The Senate bill would also add new requirements for what's known as the DSHS "Exception to the Rule" process that DSHS uses to evaluate the rate the state will pay. As drafted, the bills would allow hospitals to challenge that rate if it's too low to find a placement for a patient.

But the hospital association acknowledges that this policy won't fix the larger issue behind patients stuck in the hospital: A lack of long-term placement options for patients.

"This is just part of the work that we know needs to happen," says Zosia Stanley, associate general counsel for the Washington State Hospital Association.

The final piece of the bill would try to capture that larger issue. It would require DSHS and the Health Care Authority to conduct a report on the barriers facing patients who are stuck in hospitals. Specifically, the report would describe the needs of these patients, identify reasons why long-term services are scarce and look at alternative ways to meet the need. That report would have a deadline of Nov. 15, 2021.

"This bill really addresses the process piece," Stanley says. "In the end, there are definitely still barriers keeping people in the hospitals, especially for people with multiple needs and behavioral issues."

One possible hang-up with this legislation, however, is that it could overload an already overloaded DSHS staff.

"The bill has drafted currently will drive an increased need for staffing of the assessors," says Whiteaker. "We're hearing that in that area, DSHS is under-resourced."

Still, the Washington State Hospital Association thinks the bill is a good start.

"How we thought about legislation this year was, 'What can we bite off in the policy process that can help improve the system, recognizing that we have a broader goal of getting more funding for this system that is not functioning well for patients?'" Whiteaker says. "This is just the first step."