Five outdoor dining spots where you can pretend you’re in Paris. 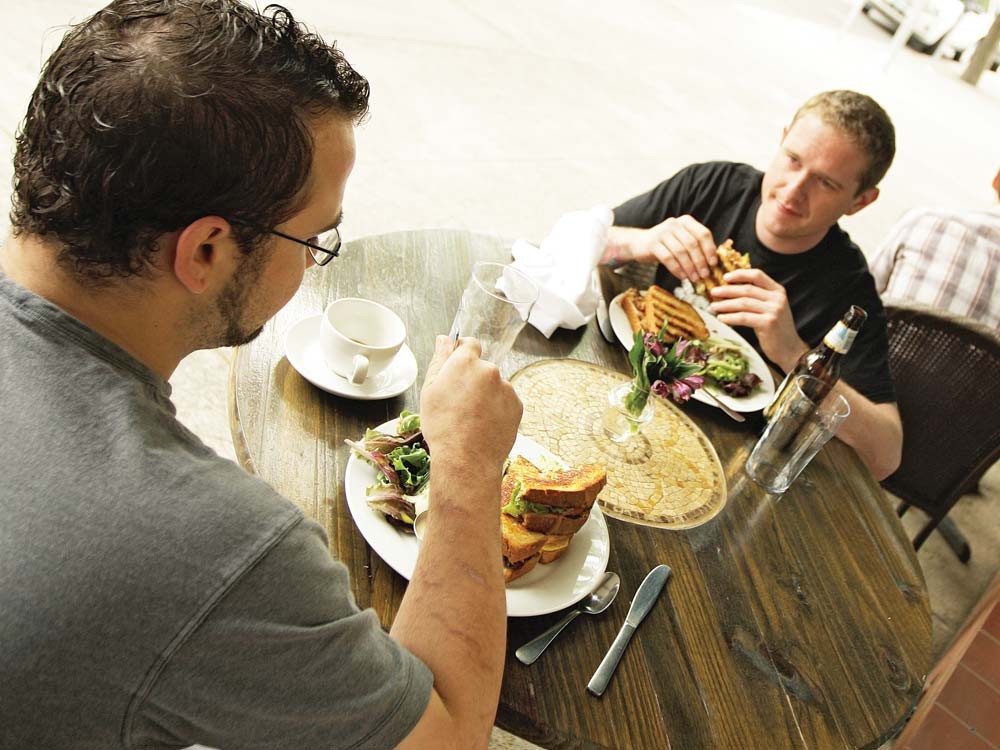 I spent part of April in Paris, and while I enjoyed the art and the baguettes and all that, what really stuck with me was the city’s cafe society. Not that fin-de-siècle literary cliché, though. Just that the abundance of cafes, their tables and chairs tumbling out onto the terraces and sidewalks, created a kind of public space that is seldom seen in Spokane.

While restaurateurs here focus their patio diners’ attention inward — assembling chairs around large, heavy tables — in Paris, they commonly turn the chairs outward, toward the hustle and life of the street. (It’s hard to find a more absorbing restaurant “interior” anywhere.) The tiny tables placed between the chairs serve less as nuclei of conversation than simply as a place to set your demitasse while you ogle.

Moreover, it’s rare there to find fences or rails quarantining the terrace crowd from the pedestrians. (State liquor laws around here require such a border if alcohol is to be consumed.) That ragged edge creates a pleasantly ambiguous delineation between the two, as strangers become a part of your coffee date, and you become a part of their walk to work. With just a simple shift of weight, a passerby is a patron, and a patron slips away into the crowd.

It’s a novel spectacle for a Spokanite, but it’s not entirely absent here.

Forthwith, a few places in the Inland Northwest that get it (at least partially) right.

SANTÉ
404 W. Main Ave.
It’s not surprising that a French charcuterie and fine-dining restaurant would nail the Gallic vibe, but this is the only place I’ve found so far that does. Most of the chairs abutting the four small tables here face away from the restaurant’s plate-glass window and out onto the street, and there’s nothing hemming you in. Of course, the view across the street is of a couple of pawn shops, and the railing that employees say is on its way may well ruin the feeling, but this is still a wonderful place to sip un petit café and imagine you’re on the Left Bank.

MADELEINE’S CAFÉ & PÂTISSERIE
707 W. Main Ave.
This downtown Spokane favorite gets points for being French-inspired, but it also has one of the best terraces in town. Its location on busy, red-brick, pedestrian-only Wall Street — across which are a clothing boutique, a sandwich place and a coffee shop — makes it about as close as you’ll come in Spokane to the vibrancy and commotion of a typical street in central Paris. And there are lots of tables and chairs, some of which even face out onto the street. Sip a bottle of 1664, tuck into a croque madame and try to imagine that that ugly black fence isn’t there.

THE ELK
1931 W. Pacific Ave.
More London than Paris, the Elk suffers from all the usual maladies of American patio dining (big tables, inward focus, heavy fencing), but, situated at the heart of Browne’s Addition, it has a homey, neighborhood feel (you always seem to see somebody you know here), and it’s the first place many downtowners head to after work on a sunny Friday. So, it gets points there.

SOULFUL SOUPS AND SPIRITS
117 N. Howard St.
Two tables, eight chairs, no railing and a view across the street to all the weirdoes who seem to frequent the Rite-Aid. Not a bad option. (Update: In the day between writing this and publishing this, Soulful Soups added a railing to its sidewalk dining area.)

COEUR D’ALENE
If you really want to get the feel of French terrace dining, forget Spokane, head to Coeur d’Alene’s Sherman Avenue and take your pick: the Iron Horse, the Beacon, Java on Sherman, Pita Pit. All but the latter fence off their seating areas but the sheer density on the street, with cafes on both sides, makes this the Frenchiest street in the Inland Northwest — and the perfect place to sit back, relax and watch this weekend’s Ironman festivities.