Gonzaga's women had to wait to hear they were in the NCAAs, but they ended up with a decent draw 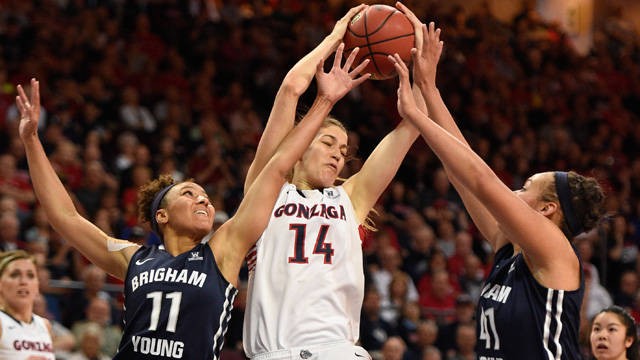 during Selection Monday, the Gonzaga women's basketball team sat patiently, hoping theirs would be next. Suddenly, the women jumped up screaming and hugging each other as GU was announced as an 11 seed in the Spokane region, securing their spot in the 2015 NCAA tournament.

This year was more nerve-wracking than years past because GU was not merely waiting to find out which seed they would receive. The Zags are 24-7, but have lost three of their past five games, including the West Coast Conference tournament, making an NCAA bid uncertain.

"We have learned over the past five games or so that in order to win, you have to play for 40 minutes," first-year head coach Lisa Fortier explained. "We cannot afford to play one great half of basketball."

After reaching the WCC tournament as the top seed, GU blew past Loyola Marymount 70-50 in the quarterfinals, but fell 61-55 to Brigham Young in the semifinals. Though GU had BYU down 12 points early and outshot the Cougars 40 percent to 26.9 percent in the first half, BYU's defense proved to be too much for Gonzaga down the stretch. Mainly, the Cougars were able to contain leading scorer Sunny Greinacher, who later was named to the 2015 WCC all-tournament team, limiting her to only two second-half points.

The Zags plan to rebound against No. 19 George Washington (29-3), their first opponent in the NCAA tournament and a team they have never played before. "They're a big, physical team, with some players who dominate the glass," Fortier says.

The first-round game will be played in Corvallis, Oregon, allowing Gonzaga's Northwest fan base to continue showing their support.

"The NCAA tournament is about leaving everything on the floor and competing," Fortier says. "I love coaching this team, and I'm going to enjoy every minute we have together."

The winner of this game will play the winner of the game between third-seeded Oregon State and No. 14 seed South Dakota State. Should they make it out of the first two rounds, Gonzaga would play at the Spokane Arena for the regional championship. ♦