New advice on when to start solid foods 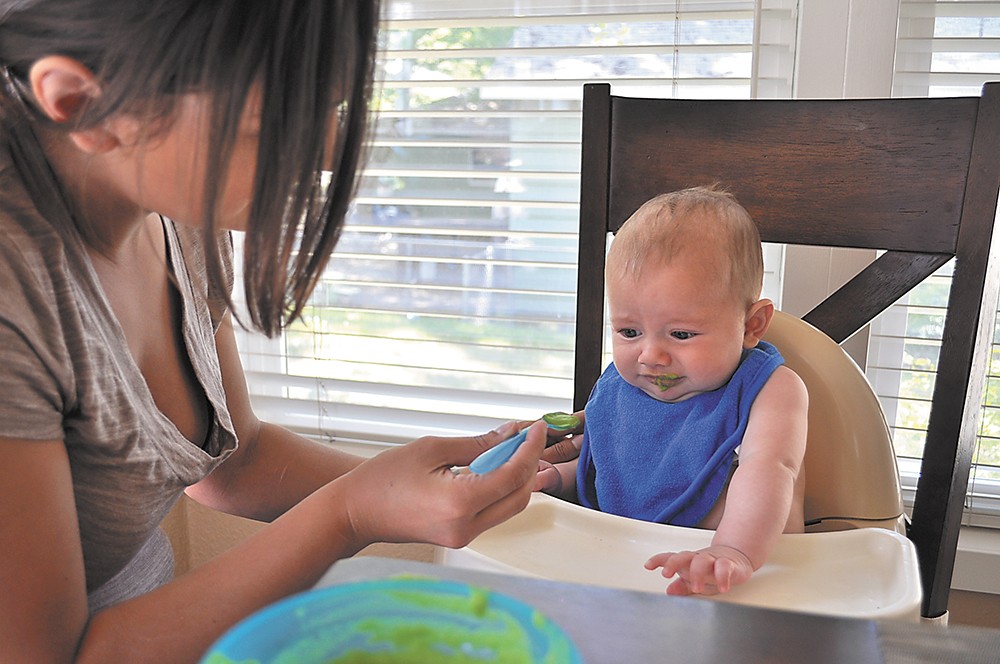 Cora Abdallah enjoys the occasional hot dog, but she isn't one to shy away from veggies or even the spicy flavors of Mexican or Indian foods.

In the coming months, Spokane mom Ginny Abdallah will introduce Cora's 4-month-old brother, Michael, to solids, offering an array of nutritious foods in hopes Michael will be an adventurous eater like his sister.

"My husband's father's first food was Jell-O, and he was started on it when he was 2 weeks old," Abdallah says. "It's really incredible how far we've come as far as what our kids eat."

While introducing the first foods is a memorable milestone, keeping up with the do's and don'ts of infant feeding can be a challenge as practices change from generation to generation.

"We do know through studies done in the past that if you introduce solids before four months of age there is a higher risk of allergies, and also they're just not developmentally ready," says Dr. Kimberly Grandinetti, a Spokane-based pediatrician.

But if parents wait too long, babies can develop oral aversions, she says. Starting solids sometime between 4 and 6 months appears to be optimal for most infants.

Babies are ready for solids when they can sit up, have good head and neck control, and express interest. At that point, variety is key, Grandinetti says.

Children may need to be exposed to foods many times before accepting them — sometimes 10 to 15 times, according to the American Academy of Pediatrics — so don't give up on those puréed peas if your little food critic initially spits them out.

Not too long ago, experts recommended introducing foods in a particular order — starting with rice cereal. But there really isn't evidence that foods need to be introduced in a certain order, Grandinetti says. Single-ingredient foods, including fruits, vegetables and puréed meats, should all be offered. She does caution that spinach, beets, green beans and carrots are high in nitrates and should be avoided before 6 to 8 months.

And although it is bound to be a messy affair, babies should be encouraged to feed themselves. They can use spoons and their fingers beginning at 8 or 9 months, and a cup starting at 6 months. It's also not too early to start the habit of eating together as a family whenever possible. "Babies and children will eat better when others around them are eating, and then that's a great tradition for families when you connect at the end of the day," Grandinetti says.

A rash of reactions

With food allergies affecting so many children, parents may approach the introduction of notorious allergens like peanut butter with trepidation. But Grandinetti says common allergens needn't be avoided when starting solids; in fact, research seems to indicate that delaying their introduction may actually do more harm than good.

A recent study published in the New England Journal of Medicine concluded that the early introduction of peanuts significantly decreased the frequency of the development of peanut allergy among children at high risk for this allergy.

"The horizon is all new," says Dr. Kerry Drain, with the Spokane Allergy & Asthma Clinic. "This is kind of a big paradigm shift for all of us."

However, she says, the specialists at her office will continue to approach each patient on a case-by-case basis. "I still think that there's more research that needs to be done before we make any generalized statement," she says.

Spokane mom Natalie Eve Downing says she discovered her son, Caelin, now 2, has food allergies after he tried some eggs during a playdate.

"He broke out in welts — big — all over his body," Downing says. "It was terrifying."

In this case, there is no family history of food allergies. Caelin has since undergone skin-prick tests at Drain's office and is allergic to at least 20 substances so far, including peanuts, sesame, scallops, eggs, garlic, beef, turkey and a number of fruits and vegetables.

Although it is unusual to have so many food allergies, Downing's experience shows why it's always a good idea for parents to pay special attention after introducing a new food to a child. Waiting two or three days in between new foods can make identifying the culprit easier if there is a reaction. Symptoms of a food allergy can include skin rash, hives, diarrhea and vomiting.

The good news: children sometimes outgrow allergies."And I hope and pray that that is the case," Downing says. ♦