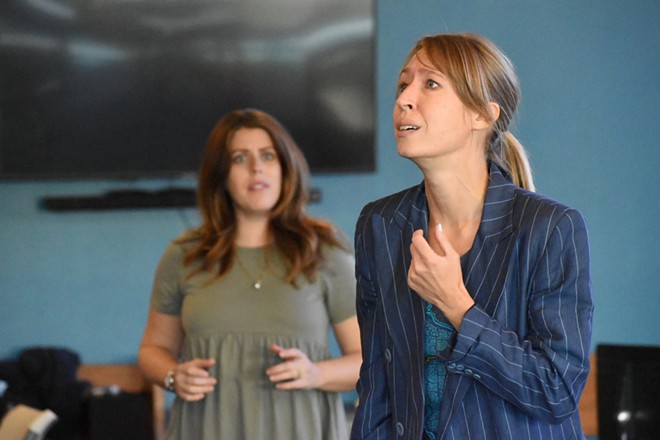 By the time the German composer Christoph Gluck debuted his Orpheus and Eurydice in 1762, the myth of Orpheus had been circulating for well over two millennia. To write an opera retelling the tale of the lyre-strumming poet wooing the beautiful nymph Eurydice and then losing her to the poisonous bite of a viper might have seemed a little redundant. And so Gluck chose for his entry point the fateful moment where one tragic episode ends and another begins.

From the very first moment, Gluck's Orpheus is in the throes of grief. His wife has already been spirited away to the Underworld, presumably lost forever. But then Amore, the god of love, moved by genuine sympathy or a mischievous sense of sport, offers him the chance to descend into the Underworld and retrieve Eurydice, albeit with two conditions. Orpheus can neither set eyes on her nor explain why until they've returned to the world of the living. This being both opera and Greek myth, it's not hard to guess where things might be headed.

Dan Wallace Miller is directing a new production of Orpheus and Eurydice for the Inland Northwest Opera — the organization's first indoor, in-person performance since the pandemic cut INO's 2020 season short.

"I'm particularly drawn to the Gluck version because, of all of the myriad adaptations of the Orphic myth, this is maybe the most ethereal and the simplest. He distilled it right down to three very specific characters: Orpheus, Eurydice and Amore," Miller says.

The other quality Miller highlights is the nature of Amore's edict. Instead of forbidding Orpheus from seeing, touching or talking to Eurydice, as often happens in other versions, Amore only has two caveats.

"What that does is it shifts the entire focus of the moral of the story from one about faith and the will of the gods into one that's about an interpersonal relationship conflict between Orpheus and Eurydice," he says. "It really just opens up so many interesting avenues. Did Eurydice want to be whisked away from her eternal repose? What are Orpheus' motivations for going down into the Underworld in the first place?"

Miller is eager to capitalize on those ambiguities as part of this updated reimagining of Gluck's opera. As played by soprano Jocelyn Claire Thomas, the character of Amore will not necessarily be the "happy-go-lucky, cherubic" Cupid that audiences might expect. She's less of an "altruistic, beneficent force and more of a Rita Hayworth-style, vampish character who is endlessly entertained by this mortal's grief."

Working closely with his longtime collaborator and set designer Christopher Mumaw, Miller is also trying to develop an aesthetic that is "looking at the story through the lens of Orpheus' grief" and captures his tortured psyche.

"When I direct, I take a lot of inspiration from film. And in old film noir like Lost Weekend or Moontide there are a lot of these wonderful, surreal, insane montage sequences of a guy going on a bender, where he's just completely lost it. Swirling cameras, neon lights, the whole deal," he says.

To recreate that inherently cinematic experience on the stage of the Fox Theater, they'll "use traditional theater elements to twist the environment around Orpheus." For instance, the cocktail advertisements that appear in the opening scene, now set in a 1950s-era bar, become a recurring motif. Like Dante's successive circles of hell, "each subsequent realm of the Underworld that Orpheus journeys into is tied to those neon signs," now "twisted and bent into abstract shapes."

Orpheus wouldn't know such profound grief had it not been for the immense joy he experienced with Eurydice while she was alive, which makes her character a constant presence, even when she isn't on stage. Here she's played by soprano Emily Birsan.

"You don't see her much," Birsan says. "She's talked about for the whole opera, and you get a glimpse into her emotions and how she reacts and everything, but it's her non-living state. So I have to really fill in the blanks of who she was as a person before and where she's come from, [because] the emotional state in which you leave a person is going to impact your state when you see them again. It's a lot more fun to imagine that things are a little more complicated when she sees Orpheus again."

Her performance aside, Birsan can't help but introduce another note of complexity to her character. She and her husband are expecting in January.

"It's an amazing thing, pregnancy, but it's funny how the body is on full display when you're doing a role, right?" she chuckles. "Being almost seven months pregnant will be a new take on Eurydice. Was she pregnant when she died? I think it could raise some really cool questions."

For Birsan, other aspects of this production will seem reassuringly familiar. She's appearing opposite an Orpheus played by mezzo soprano Emily Fons, with whom she's worked several times.

"I feel like we've done a million things together," she says. "We were brother and sister in Boris Godunov at The Lyric. And then we did a Figaro in Boston together. We're both from Wisconsin, we're both named Emily, and so we've found our share of things to connect with over the years."

Their established chemistry combined with inventive set pieces and, in Miller's words, "crazy surprises" like a pyrotechnic Dance of the Furies, seem likely to achieve his and INO's goal of a "return to indoor theaters with something that would make a pretty big splash."

"This is such a unique and interesting opera," Miller says. "It was written a little bit earlier than a lot of the really, truly great Mozart pieces, though it definitely has that mid-classical vibe. But it feels so different. It is really about letting the music drive the narrative as much as the text. It's a beautiful little gem that you don't see performed very often." ♦