Our dog Ruby, an Australian shepherd-ish mutt with orange ears and a perpetual startled expression, has disappeared again. It used to be that when Sarah or I would come home, she would sprint berserkly to the door, yipping and wriggling her hips. Now that we’re home almost all the time, we wander the house, peeking into closets and bathrooms, peering under bushes, trying to find the most recent spot where she has taken refuge from our constant, needy presence. Eventually she slinks out from behind the shed, looking guilty but prepared to do her duty. 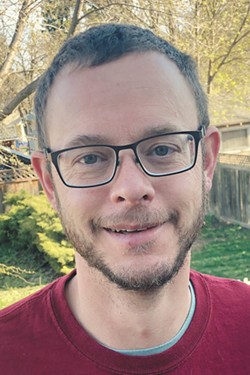 In A Voice Crying in the Wilderness, Edward Abbey wrote, “When a man’s best friend is his dog, that dog has a problem.” If a person lacks human emotional outlets, then their dog is going to be in for some tough duty. Sarah and I, for example, don’t have kids, no one to home-school through quarantine or build forts with in the living room. When our friends talk about their children, we talk about our pets, usually without self-awareness or irony. Over the course of her 16-year life span, our miniature dachshund, Bess, has accumulated nearly as many Halloween costumes as she has gray hairs. Our dogs definitely have a problem.

From humanity’s point of view, to be man’s best friend is a singular honor. From the canine point of view, the honor is more complicated, a voluntary subjugation that even in its best moments has undertones of degradation and disgrace. It’s like being appointed to Trump’s cabinet. Yes, you’re the Secretary of Defense. But you’ll never regain your self-respect, and it probably isn’t going to end well.

A cranky wilderness advocate best known for his book Desert Solitaire, Abbey was a critic of over-domestication as it applied to human civilization, too. Tameness is a danger to freedom and self-respect, and it doesn’t get a lot tamer than sitting in the house in track pants, streaming something, anything, and counting the minutes until I can justify drinking another beer.

In the first days of Washington’s shelter-in-place recommendation, Ruby couldn’t believe her luck. We lavished her with multiple walks or runs a day, frequent bouts of tug of war, and unlimited lap time. Now, several weeks in, after all the human time she can handle, she spends most of her time stretched out in the backyard, facing away from the back door, gnawing on one of the dozens of old horse chestnuts littering our lawn and garden beds.

Our little family moved into this rental house almost two years ago, and the first time I spotted Ruby chewing on a horse chestnut from the tree in our neighbor’s yard at our new house, I was alarmed. Although I have managed to forget nearly everything I learned in my decades in various educational systems, I immediately recalled an obscure piece of booklore from thirty-some years ago: Horse chestnuts contain a neurotoxin so potent it can be used to stun fish. This nugget of wisdom came from a book called Outdoor Survival Skills, which my friend Aaron Maxwell and I counted as our Bible at the time. Like many suburban fifth-graders, we were frequently thrust into urgent life or death wilderness survival situations. We memorized the book, and even today I could probably manufacture a working solar water still or recite a recipe for nonperishable pemmican. Aaron and I were best friends then, at a stage in life when almost everyone had one. It’s a stage that gradually seems to go away. If Abbey is correct, then my constant companionship with Aaron saved some wear and tear on Boxer, my family’s dog.

When I scoured the internet for information about whether dogs could be poisoned by eating horse chestnuts, all I found was a British discussion forum about dogs eating something called conkers. Conkers, apparently, are what they call horse chestnuts in England, a fact that makes me like England very much. The forum posters did not seem overly concerned, and Ruby has thus far showed no ill effects.

Incidentally, if there is anyone in our family who has real-world experience with outdoor survival skills, it is Ruby, a survivor who was rescued from a small Alaskan village where she was living at the town dump (or “rubbish tip,” for those of you over in conker-land). When we first got her, she was already an expert forager who would supplement her daily meals by delicately eating raspberries in the garden. She came to us a pretty good mouser as well. But for a girl from the dump, she has little interest in eating trash and possesses remarkably dainty table manners. She does not eat indiscriminately, so I was surprised when I found her eating something I knew to be poison. Now, though, in the time of quarantine, her conker chewing has grown more despondent and desperate. Maybe she has known they were poisonous all along.

Abbey’s dog with a problem remark can apply to the actual dogs in our currently oversaturated households,  but it might prove true of our human relationships as well. This period of social distancing would be a difficult time to be alone, and those of us who have them are very grateful for the presence of significant others. However, though we always knew our household others were significant, only now, with abundant time to observe them, are we starting to grasp just exactly what they signify. I always wondered what he meant, I can almost see Sarah thinking, as she notices I am wearing my track pants, again, or I am ordering something from Amazon, again. And now she knows.

What quarantine has revealed about too much of a good thing is not necessarily that it is bad, but that it can expose truths that should have been obvious. Wait a second, fudge is too sweet? Sure, quarantine has disrupted our lives and social patterns, but more tellingly, it has shown that we already practiced social distancing too many nights a week. Apparently, our two-person household’s pattern of completely filling our blue recycling trash can every week was not due to having parties or houseguests. The volume has stayed remarkably consistent, so all of those beer cans must be mine. And Netflix, that great diversion everyone has turned to? Streaming video platforms for us were already cashed, already raided, our relationship’s equivalent of the toilet paper aisle at the supermarket. We pillaged all the shelves a long time ago, and anything new in stock disappears immediately. Tiger King feels like decades ago. Whatever we decide to watch, I pause constantly to raid the kitchen, hoping there is something exciting in there I have somehow previously failed to notice. Sarah reads news on her phone and tries to get me to rub her feet. This is our routine, episode after episode, and yeah, it’s kind of tired. But I’d be lost without it.

This morning, Ruby lies flat in the yard, facing away from the door and our eventual entreaties. I’m upstairs, looking at exercise videos. So far, during quarantine, I have spent about twice as much time looking at exercise video tutorials than I have actually spent exercising. Sarah, who has started taking German language lessons, is pacing the house with her flashcards, loudly conjugating German verbs, many of which seem to my ears to have sinister, restrictive edges. Müssen, have to. Dürfen, allowed to. Germans, orderly and rule-following people, have done a good job of flattening the COVID-19 curve and minimizing death rates. Americans are maybe less domesticated, taken as a whole. There are benefits these days to being a good dog.

If Edward Abbey were alive, it is fairly certain he would have the good sense to spend this quarantine period camped out in a remote spot in the desert, safe from the virus and the pollutions of wi-fi or cell reception. It’s a tempting idea, but one that would of course backfire if everyone tried to do it. When Sarah and I got married 10 years ago, Aaron Maxwell gave us a new copy of Outdoor Survival Skills, which I can’t seem to find now, just in time for impending societal collapse. In fifth grade, I would have been skeptical had someone told me the true survival skills would turn out to be proper handwashing, videoconference etiquette, and the ability to give a good foot rub.

We’re asking a lot of those closest to us these days. And yeah, too much proximity can be kind of a problem. But if social distancing ensures that’s the worst problem some of us face from the pandemic, then we are very lucky dogs indeed. ♦

Ben Kuntz is a student of fiction in the MFA program at Eastern Washington University and a professor at the Kuskokwim Campus of the University of Alaska Fairbanks in Bethel, Alaska.