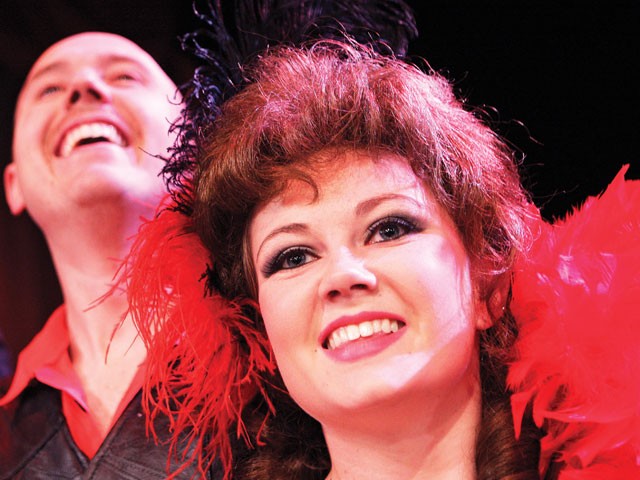 Young Kwak
Chorus members in 'Curtains' at the Civic

Quickly now: Name the last three books you read, movies you watched, plays you attended. It’s not so easy. We’re amused, angered or entertained — fully in the moment — and then we forget.

Which is why it’s worth recalling a season’s worth of work, especially in the case of theater — an art form that’s been feeling a little temporary about itself lately. Because not everyone who enjoys theater has time for every show — and even those who are professionally obliged to see lots of shows sometimes forget what directors, designers and actors were doing around here, say, eight months ago.

Nominations for the 2010 Spokies were posted recently at stagethrust.blogspot.com. Here are the very best designs, performances and productions from the 2009-10 Spokane-area theater season.

The duet with Ulla that went across and over the casting couch, along with the big finish for “King of Broadway,” equaled Springtime for Nazis and choreographers.

A masted wooden ship with a poop deck, followed by a ruined chapel, dappled with moonlight

The women’s chorus was done up in lavenders and seafoam greens, all varied but blended — a demonstration of how costumes enhance a show.

Doug Dawson (The Major- General in The Pirates of Penzance, Civic)

A knock-kneed scarecrow in a pith helmet, firing off rapid-patter delivery

Clambering onto a piano like a comic rock-climber, then imperiously seducing her man

After hearing “Heaven Help My Heart,” it’s almost impossible to praise Dawson’s singing too much — she’s that good.

Overwrought, nervous, ashamed and angry, Flanery’s Ray reaches for Una’s hand, then realizes how wrong their relationship is and always has been.

Goofy yet suave, calculating yet naive, Ware Lewis’s detective solved the crime, fixed the show and got the girl.

With her frightening portrayal of depression in a woman who doesn’t know how to love, Gasper broke viewers’ hearts.

In the midst of raucous, good-ol’-boy farce, attention to characterizing detail

“They’re watching over/ Everything we see”: They live in us.

The Pirates of Penzance (Civic)

In matters actorly, directorly and choreo-fantastical, ‘twas the very model of a modern major musical.

In a nun-vs.-priest standoff, dogmatism’s vindictive and doubt is forgiving.

Mouth-breathers in a mancave, reaching toward the light.