The Beat Goes On

Jeff Ferguson
Fleet feet on display at the Haran School of Irish Dance.

over the hard beats their shoes are making. Legs and feet are starting to fail them; every muscle is on fire. Still, their teacher yells, just inches from the two dancers' faces.

"Keep it up! I want to hear everything perfectly!" Caitlin Trusler says over the blasting, traditional accordion and fiddle music.

Her words will the girls on, pushing them to dance quickly across the studio floor to the opposite corner. All the while, their arms stay glued to their sides.

In preparation for an upcoming competition, the championship-level dancers run routines twice in a row, building endurance. As soon as the marathon is finished, the teens retreat to the carpeted end of the room and drop to the floor, splayed out like sweaty starfish gasping for air.

Located in the South Perry District, the Haran School of Irish Dance's Spokane studio goes easily unnoticed. Tonight, with its doors open for optimal breeze, cars whiz by and people sip beer at the Lantern Tap House next door. Here, Trusler has created her own little universe, one passed down to her and her sister from their mother.

Riverdance burst onto the world stage in 1995, not only raising truckloads of money for PBS pledge drives, but also arming seemingly every American with their own shuffling leprechaun/Michael Flatley impression. Some — Spokanites included — wanted more than the impression; they wanted to learn how to make all those rhythms with the fiberglass tap shoes known as hard shoes. No longer did the Irish have this traditional art form to themselves.

Twenty years later, after many "final" tours, Riverdance continues to prove that public interest in Irish dance still exists. This weekend, the troupe dances at the INB Performing Arts Center for a multi-show run, and Trusler says she plans to be there.

"What I know is it's still lovely to watch; everyone who sees it, loves it," says Trusler, 33, between teaching classes last week. "I'm excited to see it this time. I even have a student who studied here for a few years who is actually in it." 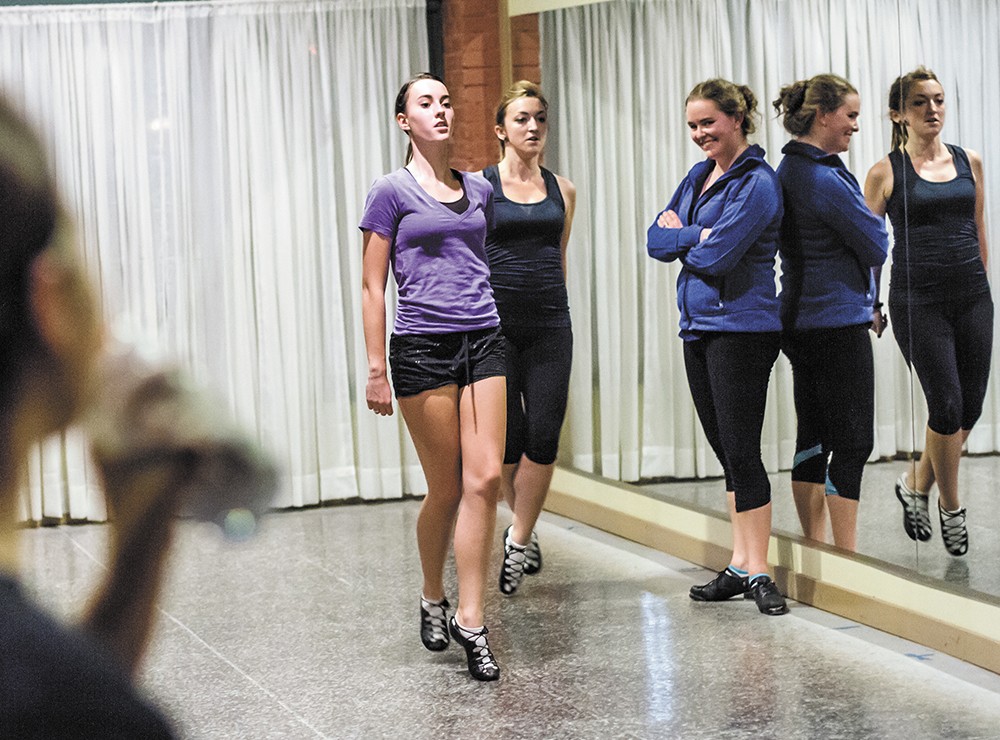 A couple of years before Riverdance would enlighten the world to Irish dance, Trusler's mother, Deirdre Abeid, began the Haran school just outside of Kettle Falls. At that point, she hadn't taken lessons since living in San Francisco as a 9-year-old. Brushing up on steps with teachers in Seattle and Portland, Abeid soon took the TCRG exam, a teaching certification from the Dublin-based Irish Dance Commission that qualifies a teacher's school to participate in Irish dance competitions, which continue to grow in popularity and expense. Passing meant the Haran School of Irish Dance was the first certified school in the Inland Northwest.

Trusler was 8 when all of this started. She claims she was a terrible dancer at first. It took multiple dance competitions to get her first medal.

"I always tell my students that there is hope," she says with a laugh. "Look at me."

Now when she's teaching, Trusler's intricate beats sing sure and strong from the floor.

Beginning steps are easy to pick up, but the further one climbs in classes and competition, the more complex the steps become. As co-owners of the school, Trusler and her younger sister Claire Worley choreograph together and apart. While Worley still runs the Kettle Falls branch of the school, Trusler opened up the Spokane branch in 2002, straight out of high school.

Deirdre Abeid was 48 when the cancer took her.

"It was May 2004 when my mom died, then my sister and I took our TCRG in September or October," Trusler recalls. "I got engaged, I went to the World Championships in Ireland, I got shingles on my face and then I got married. That time, it was all so much, I can't even remember everything."

Abeid, who taught her daughters to love dance, never got to see Trusler on the world stage, or Trusler's young son win his first dance trophy last year. But the school lives on, performing all around the region at events like First Night and the St. Patrick's Day parade. Trusler and Worley have cultivated an environment for their around 150 students where family, friendship and performance take precedence over a competitive edge.

"I just think the community people have through Irish dance is so inspiring," Trusler says. "We have all kinds of family backgrounds and religions; you don't have to be Irish. It's really satisfying to have the kids feel great about what they're doing. Whenever we perform, everyone is just moved by it." ♦