San Andreas pits The Rock against an earthquake, and you know who's gonna win 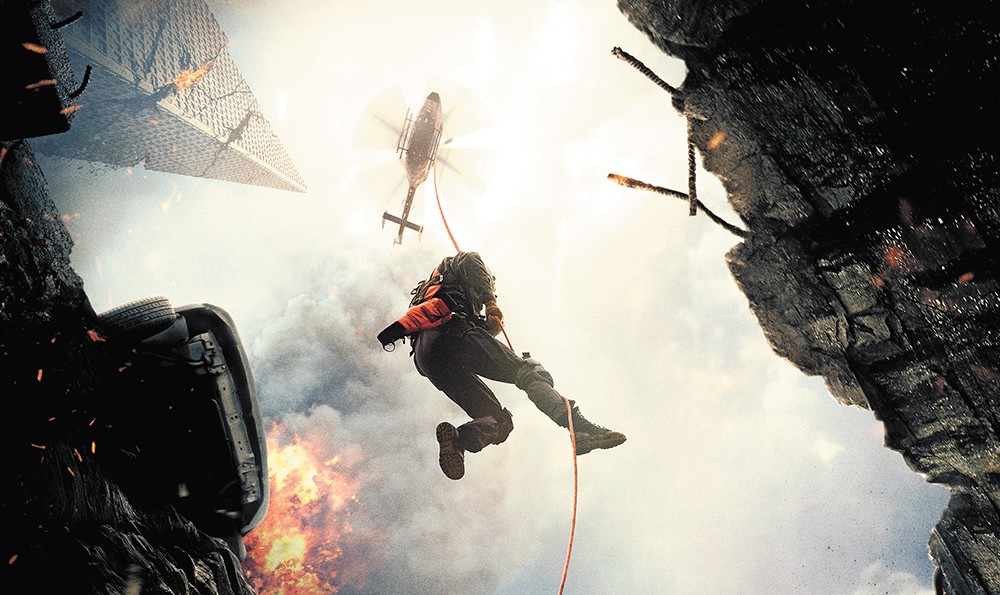 The nail-biting begins less than a minute in,

when a young woman driving along a twisty elevated road meets up with a big rockfall, and she and her vehicle go hurtling halfway down a mountainside. Thank goodness Ray Gaines (Dwayne "The Rock" Johnson), chief pilot for the Los Angeles Fire Department, is nearby in his chopper, ready to rappel down a long rope to save the dangling damsel in distress.

But forget the action for a minute. There's this Caltech lecture by leading seismologist Professor Lawrence Hayes (Paul Giamatti), who's talking about the 1.3 million earthquakes around the world each year, and calmly insisting that a big one is gonna hit Southern California. Then it's time for screenwriter Carlton Cuse (Lost and Bates Motel) to let loose with the story lines: Ray and his wife Emma (Carla Gugino) are in the middle of a divorce; their daughter Blake (Alexandra Daddario) doesn't know which way to turn; Emma's moving in with her new boyfriend Daniel (Ioan Gruffudd); and, oh yeah, there's a report of mini-earthquakes — lots of them — happening right by the Hoover Dam, where an excited Professor Hayes and his assistant head to check out the scene.

Then, the visual effects folks jump in — and their work is superb, extremely impressive, through the whole film — and suddenly there's no Hoover Dam, the professor is going to have to find a new assistant, and all rescue helicopters are headed to the Nevada desert.

Hold on — new reports show that even more quakes, bigger ones, are cropping up all along California's San Andreas Fault. You know, that jagged line from Los Angeles right up to San Francisco. But before the effects department ratchets things up many notches, there are some new characters to deal with: an engineering grad named Ben who's looking for a job but meets cute with Blake, and his precocious little brother Ollie, who hopes romance blooms from that meeting. Why the film is cluttered up with the presence of these two lads is a puzzle. We want action!

And we get it. While Ray is flying around looking for people to save, the ground in L.A., where Emma is dining out, starts shaking, and soon the ground in San Francisco, where Blake is visiting with Daniel — and where Ben has gone on that job search — starts rockin' and rollin'.

It doesn't really matter who in this group Ray saves first, and who they then go to save together. What matters is that, according to the professor, "California's entire tectonic plate has shifted." Translation: Buildings tumble down, waters, thanks to the requisite tsunami, rise up, dust fills the air, and there are more panicked people running through the streets than in your standard Godzilla movie.

The film has too much personal drama tacked on (though the business of one "protective" fellow turning coward is fun), and the pacing gets repetitive — peril, quiet moment, peril, quiet moment. But most viewers will be OK with that, because when those visual effects kick into gear, San Andreas turns into one of the most realistic, fantastic-looking disaster films you've ever seen. ♦

San Andreas is not showing in any theaters in the area.