WESTERN STARS
New Netflix streamer The Harder They Fall is absolutely loaded with talent. Among the all-Black cast are Idris Elba, Regina King, LaKeith Stanfield and Zazie Beetz, and director Jeymes Samuel crafts a hyper-stylish tale of two warring outlaw gangs, and one man's search for revenge. That one man is Nat Love, and he's played by the brilliant Jonathan Majors, who would be reason enough to watch this movie even if you'd never heard of anyone else. If you didn't catch him in The Last Black Man in San Francisco, you should: 1) track down that movie right now — you missed out, and 2) fire up The Harder They Fall and witness a seriously skilled actor capable of conveying utter sex appeal and charm one second, and his own emotional destruction the next. (DAN NAILEN)

SPOKANE'S CHAMP
Spokane native Julianna Peña has finally done it. The mixed martial arts pro ecstatically claimed the UFC women's bantamweight division belt Saturday, Dec. 11, at UFC 269 in Las Vegas. Peña's victory was immediately declared one of the UFC's biggest upsets, after she submitted her opponent and the division's former longtime champ Amanda Nunes in the second round. Though Peña's currently based out of Chicago, she still trains with coaches from Spokane MMA gym Sik-Jitsu. (CHEY SCOTT) 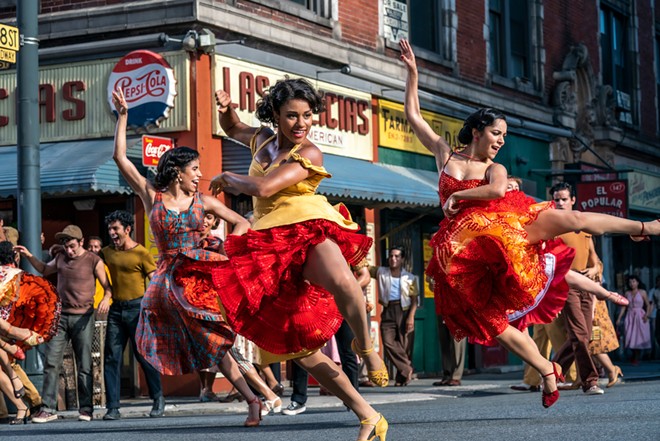 DANCING IN THE STREETS
It turns out this Stephen Spielberg guy is pretty decent at directing. Despite never helming a musical before, his new West Side Story sings. While the 1961 cinematic classic still holds up and this remake remains fundamentally unnecessary, it's also one of the best films of the year. Spielberg directs with a propulsive energy that makes the tensions between the rival '50s New York youth gangs the Jets and the Sharks pop. The period piece's cinematography shimmers with the color of the city and sways with the tight choreography. Also, the racial and class themes at the heart of this Romeo and Juliet adaptation still hold up 60 years later (which is a bummer). The only thing that ever took me out of the movie was that they cast a Young John Mulaney doppelganger (Mike Faist) as Jets leader Riff, which was 100 times more distracting than "old" Ben Platt playing Evan Hansen. (SETH SOMMERFELD) ♦