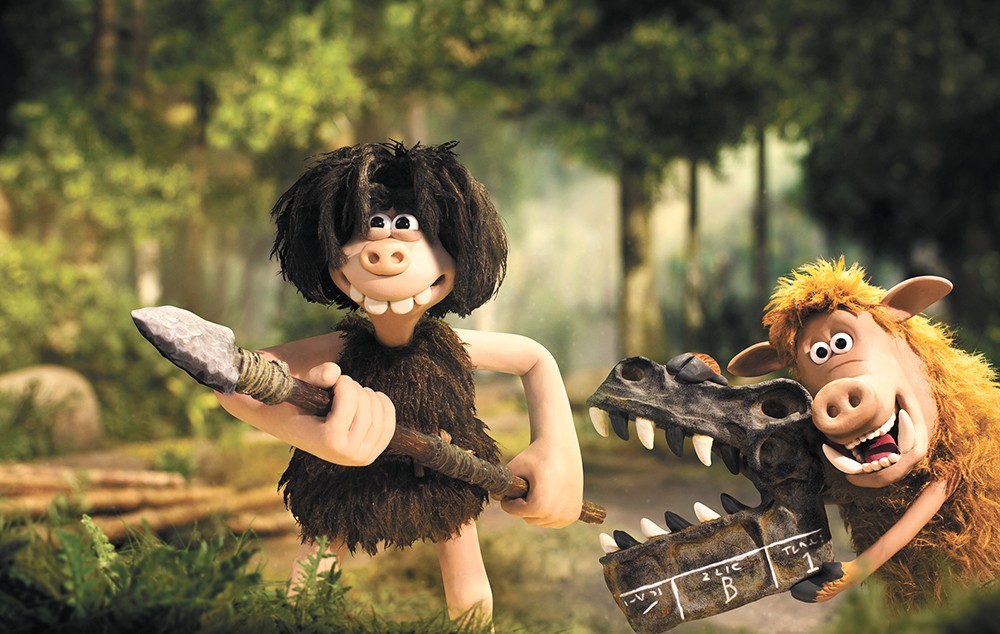 Wallace and Gromit, they're not: Aardman's Early Man is a rare disappointment from the great studio.

It breaks my heart to say this,

because I've been such a huge fan of director Nick Park and Aardman Animation, but this years-in-the-making claymation opus, Early Man, simply isn't very good. The lovingly handcrafted stop-motion animation, with its distinctive character design that is both goofy and charming, is intact, as you'd expect: That is Park's trademark. But I did rather think that smart humor — subversive and satirical and also somehow magically heartwarming — was also part of what made his work so special. There is nothing like that in Early Man. What happened?

Those absences might have been forgivable if the other thing that made Park's work so extraordinary — the sending up of classic film — wasn't completely missing from Early Man. The tweaking of genre tropes (the prison-escape flick in Chicken Run, monster horror in Wallace and Gromit: The Curse of the Were-Rabbit) has previously elevated Park's work way above the standard notion of "it's a cartoon, it's just for kids." Early Man is just a standard underdog sports comedy that we've seen a million times before, one deployed with seemingly no awareness of all the stereotypes it is full of, or of the tediously familiar story it is telling, no matter its fantastical setting.

Here we have Dug (the voice of Eddie Redmayne), a caveman from the Neo Pleistocene era, whose Stone Age tribe of doofuses — who make him look smart only by comparison — find themselves under threat from the larger Bronze Age world that has moved on without them beyond their protected glen. Dug arranges with enemy ruler Lord Nooth (Tom Hiddleston, doing an inexplicable cartoon French accent) for his tribe to compete in a soccer match with the professional players of Nooth's more advanced city, with the self-determination of Dug's tribe as the prize. Will they be left alone in their backwater cave-dwelling ways? Or will they be forced to work in Nooth's metal mines?

To call Early Man wildly anachronistic would be an understatement: The opening flashback sequence that depicts humans and dinosaurs living side by side is but the first of its obvious and unclever bizarrities. That's nowhere near the problem of the movie's low humor: simple slapstick, mild gay panic, crotch injuries and "isn't it hilarious that women are sexual beings?" are the most it stretches to. The puns aren't groan-inducingly bad so much as they aren't even puns: When one caveman complains that it's a "bit early" in the morning for him to go hunting, Dug replies, "But we're early man!" That doesn't even make any sense.

Movies about sports usually work to appeal to those of us who aren't into sports at all by letting the athletic stuff serve as a metaphor for something larger. But Early Man is about almost nothing but soccer. The "mythology" of the movie's focus is on how Dug's tribe, in even deeper history, invented the game, and now only they've got the heart to win against professional players. Or something. It's strained even as these sorts of movies go.

The script is by first-timer James Higginson and Aardman vet Mark Burton, but they don't seem to have any idea what to do with it besides indulge in the most tiresome of predictable plots, including giving Dug a manic pixie Bronze Age dream girl, Goona (Maisie Williams), to train the quite literally moronic Stone Agers in preparation for their Big Game.

I'm so disappointed I can barely think of any caveman-inspired quips to sum up my dismay over this movie. Is Early Man crude and simple when Aardman's other work has been sophisticated and multilayered? Yes. But it can take no pleasure in saying so. ♦

The original print version of this article was headlined "Prehistoric Bore"

Early Man is not showing in any theaters in the area.

This is the End: How Movies Prepared Us for the Apocalypse