The city of Spokane aims to add a new 24/7 shelter this fall, missing its July 1 goal 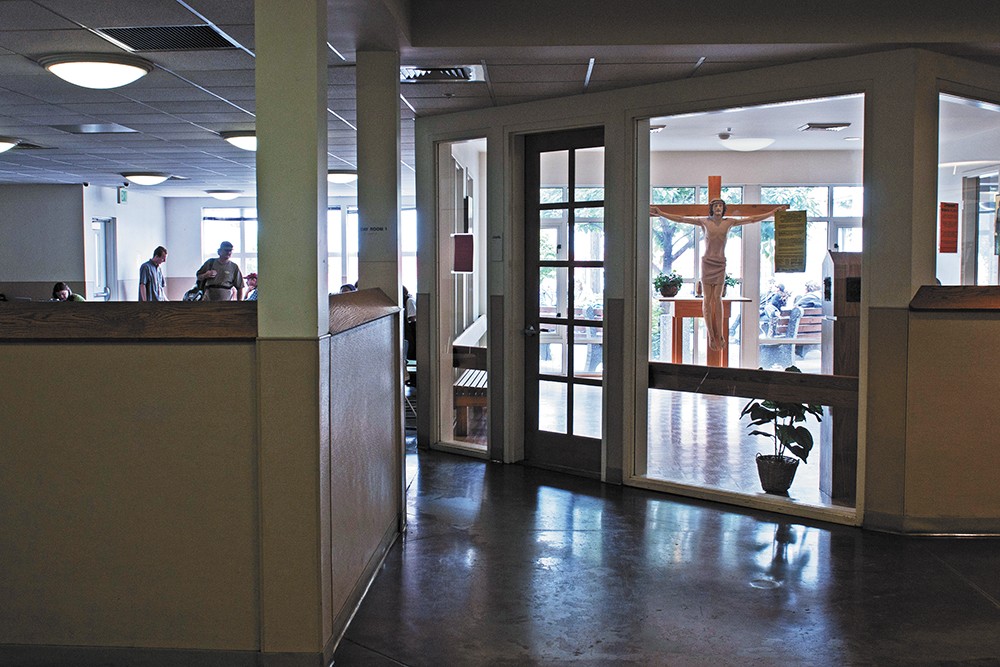 House of Charity, run by Catholic Charities, in downtown Spokane.

When the city of Spokane and Catholic Charities ended the experiment with a 24/7 downtown shelter last summer, the news came with a plan: By July 1, 2019, there would be a new shelter outside the downtown core.

Even in the winter, as the city scrambled to establish warming centers to keep homeless people safe at night, City Council members and city staff remained optimistic that by July 1 a new shelter could ease some pressure.

But life, as they say, comes at you fast. As that July 1 target quickly approaches, the city now has a new timeline to add a new shelter.

"Our goal is to have additional capacity up and running by the fall," says Kelly Keenan, director of the city's Community Housing and Human Services Department.

That would be at least a year since House of Charity, run by Catholic Charities, reduced its hours.

Catholic Charities and the city made that move due to concerns that the single 24/7 shelter downtown created safety issues for homeless individuals, staff and the surrounding neighborhood. Mayor David Condon says the city has been working "diligently" to add a new shelter this year. But council members are expressing frustration that it's taking so long to add shelter capacity that could serve homeless individuals day and night.

"I am disappointed. We should have had one up on Sept. 1, when we closed 24/7 capacity at House of Charity," says City Councilman Breean Beggs. "I'm not sure the plan was to delay it for a year. No one has ever explained that. But that's where we are."

Right now, the city is still trying to answer some basic questions about a second shelter: Who, what, when and where?

On June 10, the city put out a bid to social service agencies to operate a new emergency shelter. The deadline for applications is July 7, and the projected opening of the shelter is Sept. 1. The shelter would have no barriers for entry and should emphasize housing individuals. What it would look like, exactly, is still to be determined; showers and storage may be phased into whatever facility is chosen.

A location hasn't been finalized as of press time. The city has publicly discussed options, such as converting what was used for a warming center on Cannon Street into a shelter, or purchasing the former Grocery Outlet on Sprague close to Spokane Valley. Keenan says the city is no longer evaluating the Cannon site for a shelter, but he says the Grocery Outlet site is a "possibility" that the city can't discuss fully yet as negotiations are ongoing.

"The goal is to have both day and night-time service considerations," Keenan says. "Part of the vision for this new capacity is that it could be a site that could be a regional resource. We know homelessness is not a purely urban issue. We know that it extends throughout the community."

The focus for the city now, he says, is to make sure there's at least one shelter with day and night services in addition to House of Charity. Later on, Keenan says it's possible that there will be a need for yet another.

In the meantime, however, there's a lack of shelters that can serve homeless individuals, especially adult men, in the daytime. Beggs calls that "one of the biggest missing pieces" in the city's shelter system.

But City Council can only do so much, he says. They can pass resolution and budget ordinances to provide funding, but the council can't initiate a contract for property or services. For that, they have to wait.

City Councilwoman Kate Burke thinks Condon's administration should be to blame for the delay in opening a new shelter. She doesn't doubt that the Community Housing and Human Services Department is working hard to address the issue, but she suspects it's not being made a priority at the top.

"The mayor is not taking it seriously and they're not putting up facilities that are going to help people in poverty," she says.

She, like Beggs, thinks the delay may be a cost-cutting measure. But it's one that she says has backfired: Because of a lack of shelter space, the city had to spend more than $1 million to open warming centers over the winter. And soon, the city will need to think about facilities to help keep homeless individuals cool or out of the smoke.

"We're going to have to spend a whole bunch of money again," Burke says. "I'd rather spend money on a permanent shelter rather than these temporary centers that don't help anybody."

Condon disputes the notion that his administration hasn't made an emergency shelter a priority. He says the city has spent $19 million on homeless services in the last two years. It's the council, he says, that is creating distractions that make it difficult to work with partners for a new shelter.

"Often to the chagrin of many of our partners the council doesn't help us get to regional solutions or metropolitan solutions on issues like emergency response or homelessness or other issues where we should be coming together."

While Beggs is disappointed a plan wasn't in place earlier, he says he wants to focus on the future by supporting staff working to add a new shelter.

"We should just focus on getting there," he says. ♦

The original print version of this article was headlined "Waiting Game"