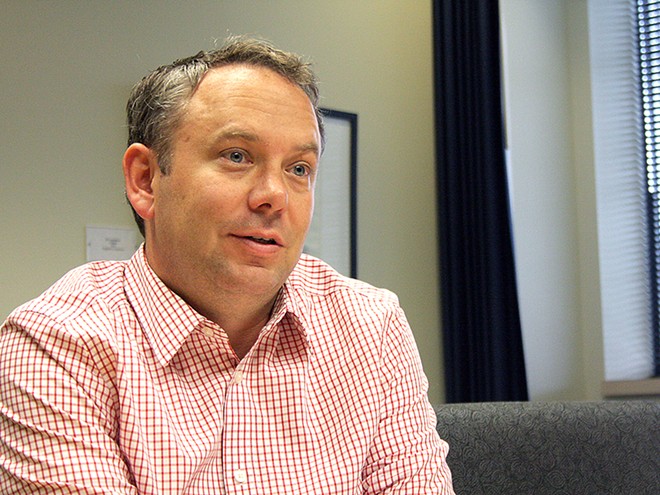 "We are on solid footing," Mayor David Condon told the Spokane City Council Monday before members of his cabinet handed out hefty black binders to each council member.

Inside each was a copy of the mayor's line-item $600 million budget for 2014, detailing plans to fund 25 new officers and restore full capabilities to a South Hill fire station cut last year. The addition of new officers, as well as the mayor's intention to take two years' worth of the 1 percent-per-year property tax increase, became clear in August, but this week was the first time he committed to restoring Fire Station No. 9 near Bernard Street and 18th Avenue.

The new spending comes primarily from paying off an old debt, new parking meter revenue and administrative cuts at the police department. (The property tax increase will be directed at capital spending, like new police cars.) Nine city staffers will be laid off, a stark contrast to last year's nearly 100 positions cut. Three are clerk positions that City Spokesman Brian Coddington says can be easily reassigned; the rest are positions in the engineering, finance, planning, and asset management departments, plus one police secretary and a fleet equipment servicer. Those employees will soon get layoff notices, with hopes to begin finding them new city jobs, Coddington says.

Months after a domestic confrontation led to a fatal shooting at a north Spokane home in March, the county Prosecutor's Office has released a memo confirming its decision to not pursue charges against homeowner George Wallace in the death of 28-year-old Marshall Balduff.

Chief Criminal Deputy Prosecutor Jack Driscoll writes in his charging decision that Balduff had a blood alcohol level of 0.18 and a "foot-long" knife when he tried to force his way through a dog door into Wallace's house on March 6. Investigators report Balduff had threatened people in the house and refused multiple warnings to leave in the moments before he was shot once and killed by Wallace.

"It would be reasonable for a jury to conclude that Wallace acted on a good faith belief, based on Balduff's actions, that he, or another, faced actual danger of great personal injury or death," Driscoll writes, adding, "No charges will be filed."

Driscoll filed the decision memo on June 14, but the Prosecutor's Office did not release the memo until Oct. 4, following multiple public records requests. Balduff's family has questioned what they consider to be inconsistencies in the investigation and asked why Wallace did not call 911 for police assistance prior to the shooting.

Despite technical glitches that marred the opening of Washington state's health insurance exchange, more than 9,000 people have successfully enrolled in coverage since the online marketplace debuted last week, more than half of which are newly eligible Medicaid enrollees.

According to the latest figures released by the Washington Health Benefit Exchange, 9,452 people completed enrollments, including 916 in qualified health plans, 2,594 in immediate Medicaid coverage and 5,946 in expanded Medicaid under the Affordable Care Act. An additional 10,497 people have applied for qualified health plans, but haven't paid for them yet.

The Washington Healthplanfinder website, where consumers can shop for health plans, garnered more than 837,000 total site visits and 2.5 million page views in its first week of operation.