Every time a tap is pulled at the Golden Handle Project, more than just beer flows.

That's because the Golden Handle Project is Washington's first brewery to incorporate as a social purpose corporation, which allows it to pursue profits and social good. Under Washington's state law, the directors of social purpose corporations can consider social or environmental goals, and not merely profit maximization, in their decision-making.

For the Golden Handle Project and owners Tim Stoltz and Jason Gerstner, that social aim is to sell quality craft beer as a way to raise money for biomedical research and education.

Stoltz and Gerstner met through a weekly brewing group in 2017. "We bonded over a mutual interest in beer, and started to talk over this idea for a business that would benefit the community," says Gerstner. "At first we were looking into a nonprofit, but through research we found an SPC better fit our needs."

Gerstner says the Golden Handle Project's chief cause has been Ales for ALS, an international fundraising program that asks breweries to craft beers from a custom hop blend and then donate the proceeds to the ALS Therapy Discovery Institute, a nonprofit biotechnology research organization focused on finding treatments for amyotrophic lateral sclerosis (ALS).

"Basically $1 for every pint made goes back to Ales for ALS," Stoltz explains. "The Golden Handle Project and a few other breweries have already helped with hop selection this year for next year's blend."

"We also have relationships with other local organizations like the Steve Gleason Institute," Gerstner adds.

The brewery's owners also make it a priority to offer events that bring people together. "Suds and Science started as an idea I'd had to bring science into the community," says Gerstner. The event features local scientists who present talks on topics of their choice, all while customers enjoy their favorite beers. "I started out networking with some of my colleagues and friends at WSU, and from there we branched out further to other universities," says Gerstner, whose day job is as an assistant professor and researcher at Washington State University's Elson S. Floyd College of Medicine.

On Tuesdays, the brewery hosts an event called Tap Takeover, dedicating three or four taps in its taproom to other brewers, enabling them to engage with customers. 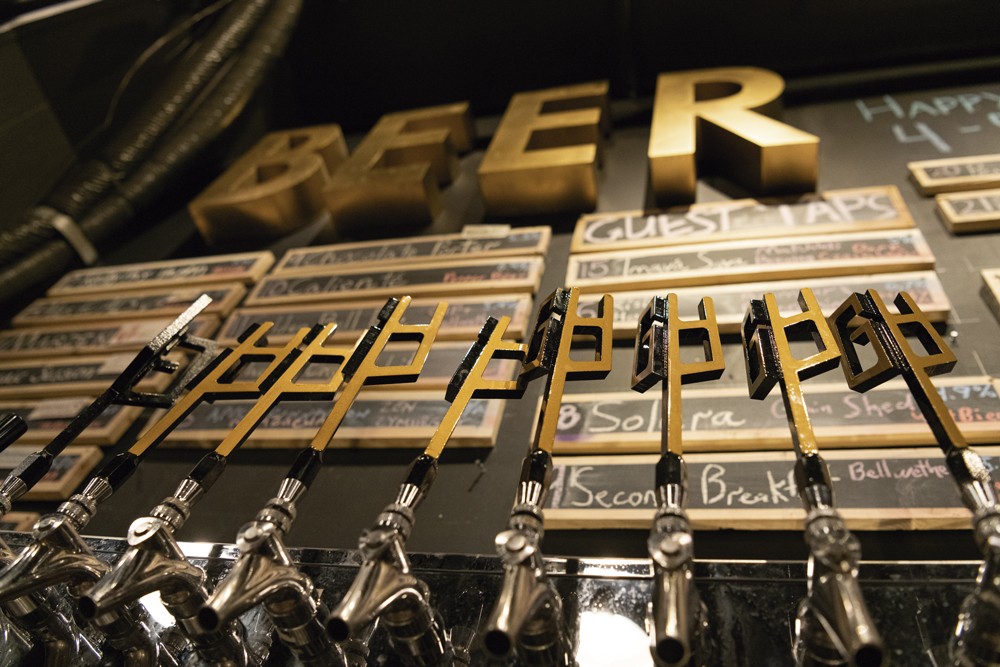 Gerstner says the Golden Handle Project helped launch Spokane's West End district's first Octoberfest pub crawl event this past fall. The West End Beer fest featuring GHP as well as neighbor breweries Whistle Punk, Brick West, River City and Iron Goat with live music at several venues, is scheduled for April 9. "We have a couple of ideas in mind for the future," Gerstner says. "We'd like to create a film night collaboration that would coincide with new beer releases for us and other breweries, and we're also hoping to start working with local chefs and restaurants on beer and food pairings."

So what's on tap at the GHP?

"We try to stick with beers we enjoy drinking, so we carry a nice range from hoppy IPAs to lagers that taste like bread," Stoltz says. "Our Ales for ALS is a pretty big hit, as is the Chocolate Lager because it tastes so delicious."

A pale ale, a saison, and a Märzen are also among offerings.

In addition to beer, the GHP also makes hot sauces using lacto-fermentation, a process that involves soaking vegetables in salt water. The saltwater brine creates an anaerobic (oxygen-free) environment where only lactobacillus bacteria can survive. These bacteria act as a preservative, keeping harmful bacteria from living in the ferment.

"It's something we've been having some fun with," says Gerstner. "The sauces are made with simple ingredients — peppers, onion, garlic, carrots, lime and salt — and in a salt-concentrated environment the veggies will naturally ferment."

"Our Caliente beer has the jalapeño blend added to it, and we also sell beef sandwiches that go well with our sauces."

The Golden Handle Project was launched in November 2020 next to River City Brewing on South Cedar, with the pub opening for its first day just before the second round of COVID-19 shutdowns. "It's been a challenge, but we are thankful for the events we have been able to host, our Suds and Science event in particular," says Gerstner.

Chef Kayleigh Wytcherley created the menu at Bark, A Rescue Pub, where takeout may also include a new furry companion