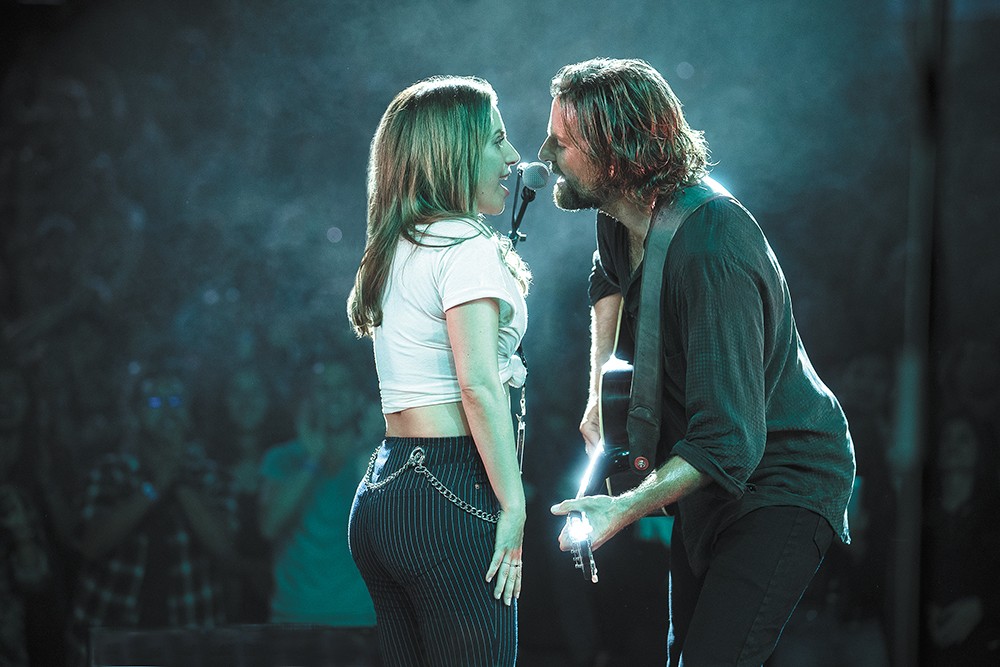 Debuting film star Lady Gaga and debuting director Bradley Cooper have stunning chemistry in the latest version of the evergreen melodrama A Star Is Born.

It's not a music movie until a sweaty singer washes down a handful of pills with gulps of grain alcohol, and A Star Is Born is a music movie from the first gin-splashed scene.

Directed and co-written by Bradley Cooper, this third remake of the 1937 original opens at an outdoor concert, shot from the perspective of the band onstage, a rock-country hybrid headed by Jackson Maine (Cooper, really playing guitar and singing). The film's ongoing band's-eye-view approach and music industry details (hotel parties, pre-show huddles, drug-supplying doctors) make this reboot feel like a rock doc.

I'll admit the trailer for A Star Is Born made me cringe. I suspected Cooper might be channeling Matthew McConaughey, and I wondered if Lady Gaga could deliver a believable, nuanced performance. Turns out, Lady can act. Gaga chomps into the role of emerging singer-songwriter Ally with the ravenous passion of a performer out to prove doubters wrong. She emotes with her entire body, conveying subtle mood shifts with just her irises.

And Cooper does his jobs — all of them — better than expected. Rather than imitate McConaughey's odd drawl swagger, Jackson's songwriting and stage presence embody Neil Young and Chris Stapleton, while his speaking voice is mined from the gravel pit in Sam Elliott's throat. Elliott and his iconic moustache play Jackson's older brother Bobby, and the brothers' blood-relation subplot adds depth and pathos to Jackson, making him more relatable than Kris Kristofferson's one-dimensional dirtbag character from the (barely watchable) '76 Barbra Streisand version.

The magnetism pulsing between Ally and Jackson is undeniable. When Ally's getting to know Jackson, she warily tells him, "You're a real gentleman, I think." She's interested, yet also senses he's a complicated dude "tryin' to fill that void" with booze and pills. Attraction is one powerful current, though, and Ally chooses to "dive in" anyway, hoping Jackson will truly "let the old ways die" in order to clean up and show up for her.

But of course, A Star Is Born is a tragedy. We know someone's star will fade in a spectacular explosion; suspense comes from wondering how. As a director, Cooper teases the audience with false dangers to keep us guessing. Every good rock movie also includes a rock-bottom scene, and ASIB is no exception. Waiting for Jackson's habits to catch up with him is morbidly fascinating. Just how far down into the void will he plummet before he hits the cold-shower wake-up call of reality? The answer — a humiliating spectacle — does not disappoint.

From music execs disapproving of Ally's nose size to her manager Rez stressing the importance of "creating an image," the evolution of Ally's physical appearance is a big thread in this story. She constantly seeks approval from the men around her. However, I don't view her thirst for validation as a weakness, but rather an honest portrayal of gendered double standards in the industry. While Jackson Maine can sell out arenas looking like a sunburned fur trapper with greasy hair, Ally must repackage and alter her body with focus-group precision, simply because she's a woman.

A Star Is Born has schmaltzy moments. In a heavy-handed backstage scene, Jackson tenderly peels a fake eyebrow off Ally's face—stripping away her mask, so that she's vulnerable. Get it?! And Ally's final musical number seems torn from the Beaches scrapbook, her spotlit performance a too-close imitation of C.C. Bloom crooning "Wind Beneath My Wings" in a velvet gown, backed by a maudlin string section.

But overall, this Star doesn't reek of Hallmark. It's an engaging, instant classic that has the glitter of escapism and the grit of serious topics — chemical addiction, childhood neglect, co-dependency. Cooper has built one hell of an entertainment-award-harvesting machine, and Elliott especially deserves the gold statuettes coming his way.

Damn it, I can't believe I didn't hate this movie.

Warno Bros.
The moment in A Star Is Born when Jackson Maine stops aspiring singer Ally as she's walking into her house, telling her from the open window of his limousine, "I just wanted to take another look at you," was endlessly memed online before the movie even opened, probably without most people realizing that the scene itself was already a variation on an iconic moment in the previous versions of A Star Is Born.

Fredric March, James Mason and Kris Kristofferson all tell Janet Gaynor, Judy Garland and Barbra Streisand some variant of "I just wanted to take another look at you" in the 1937, 1954 and 1976 A Star Is Born films, respectively, just one of the ways that the story of the relationship between a rising young female artist and a fading older male artist has become a sort of Hollywood myth. Later renditions have added more grit and more anguish, but the core tragedy has always been there, embodied in the use of that line, which initially indicates promise and hope, but turns into a harbinger of doom by the end.

The original print version of this article was headlined "Perfect Illusion"

A Star Is Born is not showing in any theaters in the area.