mong certain research circles, there's a phenomenon known as the "pet effect." It's an umbrella term for the symbiotic — that is, mutually beneficial — relationship that develops between animals and the humans who care for them.

While there's certainly plenty of anecdotal evidence from animal lovers to back up the pet effect, it's still being substantiated from a scientific standpoint. Many of these formal studies have focused on the therapeutic value of the pet effect in particular. One paper published just this year examined pets' apparent ability to quell some of the darker thoughts experienced by their suicidal owners. Another report from 1997 studied the sense of interconnectedness that pets offer to survivors of sexual abuse.

But with an estimated two-thirds of families sharing their homes with at least one pet, the pet effect could very well be broader than any one study can account for. And few things are more indicative of that than the unique bond they seem to have with children.

"Historically, pets become a very common factor in little kids' early lives, and we socialize our kids when they're really young that animals are a positive thing," says Jane Jenkins, a counselor and wellbeing specialist at the Washington State University College of Veterinary Medicine. "If you think about a nursery, that's all animal themed. Usually a stuffed animal is their first toy. There are thousands of books about animals. So, by the time they get a pet, they're primed for it to become a positive experience."

As she points out, the intimacy that children experience with their pets tends to surface in their drawings.

"When you ask little kids to draw a circle with them in the very middle, and then you ask them to draw all the people that are close to them, they almost always draw their animals right next to them — sometimes even closer than mom and dad or siblings."

That close kinship can in turn lead to a greater sense of stability. Despite whatever life changes and upheavals might be taking place around a child, the presence of a pet can create a sort of emotional anchor or bedrock for them.

"What's cool is that, if they have a pet, studies have shown that the kids actually feel less anxious and have fewer transition problems when they move or have to adjust to a new school," she says. "Because, if you think about it, that's the only constant. Parents go to work, come home, and there are interactions that are happy or sad. But pets are there and the same all the time. It's the true definition of an unconditional relationship." 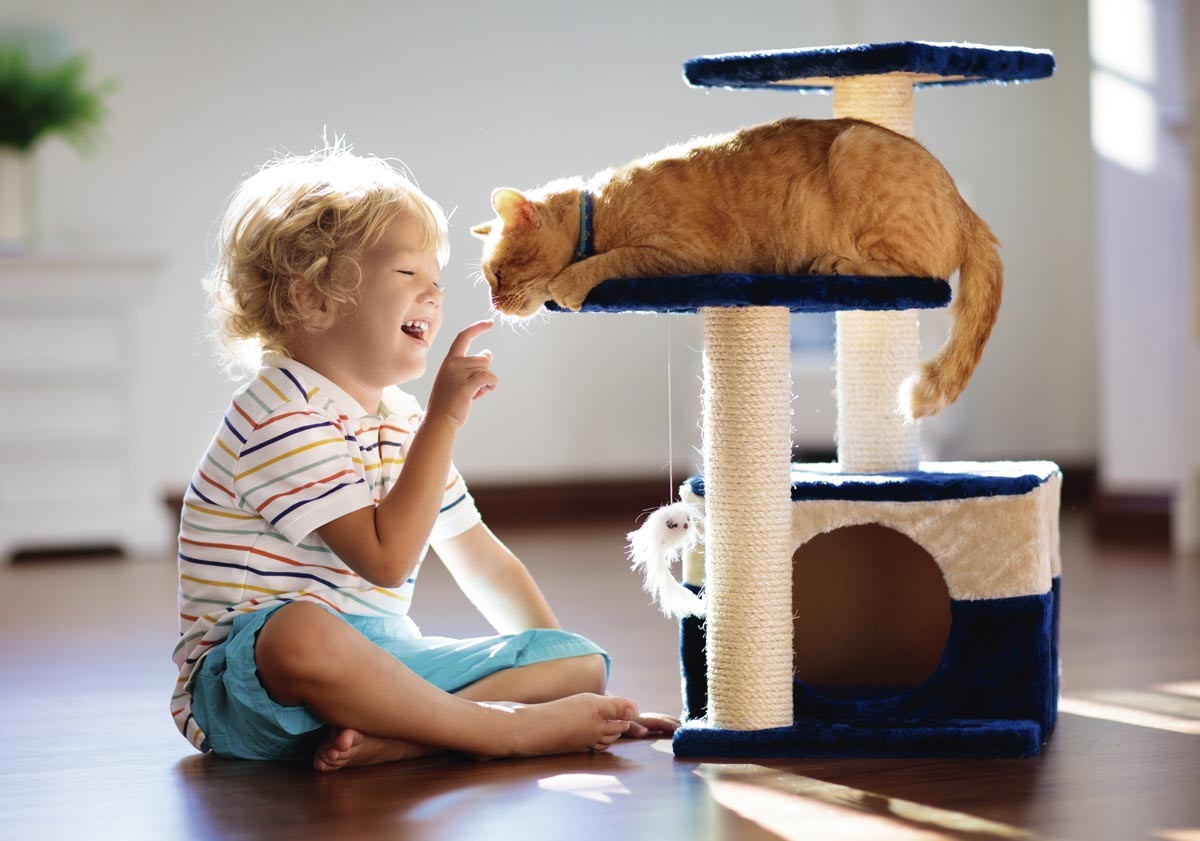 here's a similar rationale behind introducing pets — and dogs especially — into classrooms, where their non-judgmental companionship could prove beneficial in encouraging students to improve their reading ability. A series of studies in 2016, 2017 and 2018 looked at programs that followed this approach, known as "animal-assisted intervention," and found some evidence that reading aloud to dogs had a positive impact on kids' literacy skills.

However, interacting with pets isn't a one-way street. Because pets mirror humans in having their own individual sets of likes and dislikes, children can learn valuable socialization skills.

"Kids learn self-regulation based on interacting with pets," says Jenkins. "They have to recognize when the pet needs space and they have to learn to give that space to them. So they start to learn boundaries, and they start to gain some external awareness. Like, if I run up to the dog and he runs away, that's on me. But if I can sit quietly and be still, my dog will come to me. That way they learn to interact with and take cues from a nonverbal being who isn't telling them exactly how to behave."

Her example raises an interesting point. In most of these scenarios, it's easy to default to thinking of pets as a synonym for dogs. Yet that's not always the case.

"While much of the research is on dogs, there is research to show that all pets have benefits, including cats and small animals like rabbits and guinea pigs," says Steve Feldman, president of the Human Animal Bond Research Institute (HABRI). To illustrate, he mentions a National Institutes of Health (NIH)-funded study that examined how smaller animals, such as rodents, helped autistic children improve their communication and socialization abilities.

Feldman's own organization also co-funded one of the largest studies yet conducted on pets in schools.

"This included reptiles like bearded dragons as well as some of the smaller mammals and even some fish. What it showed was that pets in the classroom actually supported the development of prosocial behaviors, like caring for others, and academic performance. Kids just had better behavior, better attention and wanted to learn a lot more about biology when they had these small animals around."

imilar benefits carry over to domestic life, where routine feeding, bathing, exercising and cleaning up after pets opens up more opportunities for cultivating prosocial behaviors and strengthening the human–animal bond in the process. In fact, basic pet care can even give us the same feel-good rush as our favorite hobbies and entertainment.

"Some of the studies on brain chemistry show that your oxytocin levels, often referred to as the 'love hormone,' go up when you're interacting with a pet. Serotonin, dopamine — the good chemicals in your brain — go up, and the endorphins associated with reward increase. At the same time, your cortisol levels, which are your stress hormones, go down. This is why pets can be so beneficial for mental health," Feldman says.

All this might sound like a wholesale endorsement of furry, fuzzy and scaly friends in any form, but Jenkins advises would-be pet owners, especially first-timers, to think about the long-term implications before heading to the nearest breeder or pet store.

"I would encourage people to really consider everything that goes into pet ownership," she says. "Because if you're already in a stressful household, a pet can add financial and interpersonal stress. Make sure that you're ready for 10 to 12 years of commitment and that you have all the information before you bring a pet into your home."

The original print version of this article was headlined "Animal Attraction"