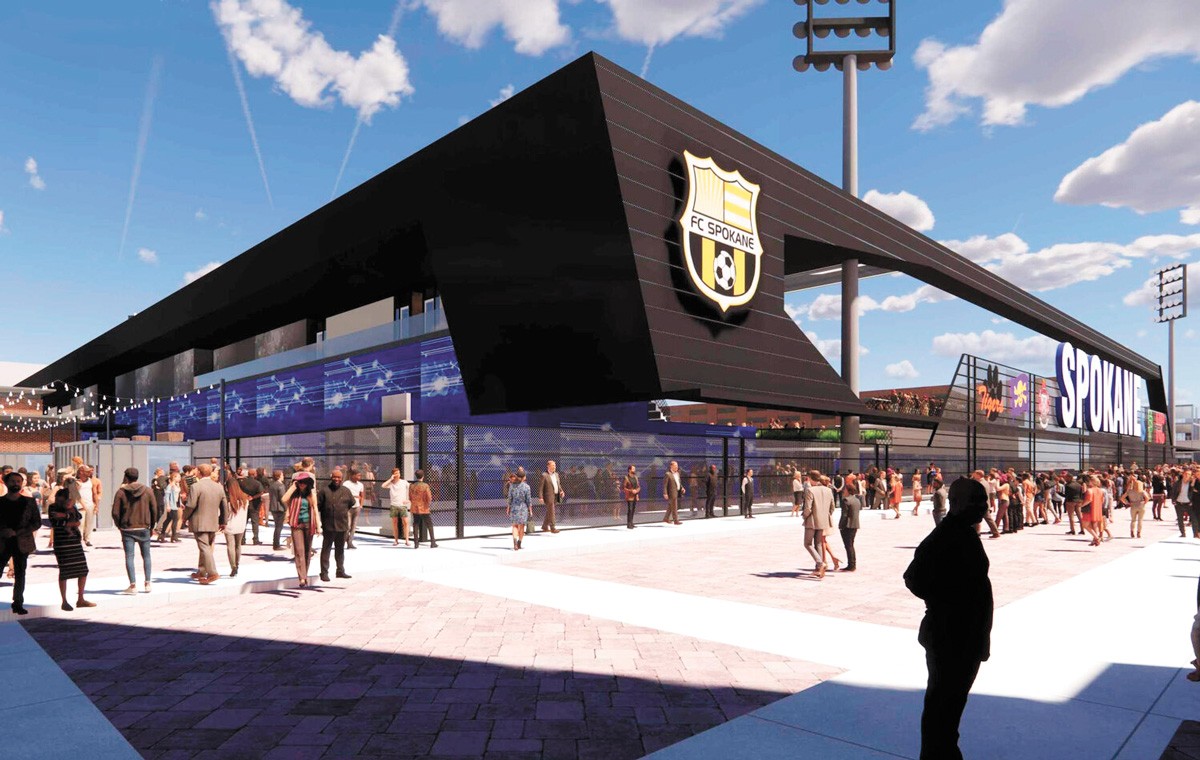 The United Soccer League has given a firm commitment to bring a pro team to Spokane if the stadium is built downtown.

If you're a voter in Spokane, you may be confused about the recent stadium news. Once again, there's a proposal to build a high school sports stadium downtown. Once again, Spokane Public Schools wants input from the public.

Maybe you're thinking, "Didn't I already provide input more than two years ago?" Yes, yes, you did. In 2018, nearly two-thirds of voters in Spokane like you told the school district that they didn't want the stadium downtown.

Now, the proposal is being resurrected. Although Mark Richard, president of the Downtown Spokane Partnership, says "resurrected" is the wrong word, because in reality the stadium idea never died. Rather, when voters knocked it down, it lay dormant, waiting for a new vessel through which it could come back stronger and take on its physical form.

City officials and former Mayor David Condon backed the idea in 2018, but now Richard is the latest to push for it. Last week, Richard — joined by a representative from the United Soccer League — made an impassioned plea to the Spokane Public Schools board, asking them to rethink the district's plans to build the new 5,000-seat stadium at the site of the soon-to-be-demolished Joe Albi stadium in northwest Spokane. Richard insists that putting it downtown, by the Spokane Arena and the Podium sportsplex, is better both for students and the community. It would bring Spokane a pro soccer team, and it won't cost the district any more money than they're already spending.

The Spokane Public Schools board is reluctant to go against the will of the voters, however. Putting another vote on the ballot could delay any stadium being built by a year. Meanwhile, the district estimates about a half-million dollars in planning for the stadium at the Albi site couldn't be recovered if abandoned now.

But Richard says putting it downtown would still save the district millions in the long term. He wants the board to make what he knows would be a bold decision.

"We understand this may be a hard ask," Richard told the board. "We are asking you to have the courage and the vision to vote 'yes' on the downtown stadium."

HOW IS THIS DIFFERENT THAN BEFORE?

For the school district, the central pitch of the downtown stadium proposal remains the same as it was in 2018. With Joe Albi stadium set to be demolished, the district has $31 million in voter-approved bond funds to spend on a new stadium. Building it downtown would make it more centrally located for high school students, and it could open it up for other uses that could spur economic activity.


But this latest proposal is different from what voters rejected in a few key ways. For example, in 2018, it was suggested that a new downtown stadium could attract a pro soccer team. But now, the United Soccer League has given a firm commitment to bring a pro team to Spokane if the stadium is built downtown.

Justin Papadakis, COO for the United Soccer League, says the league is "very committed" to Spokane. They've offered to contribute an extra $2 million to the project.

"We've been working very hard to make a professional soccer team in Spokane a reality for several years, and now we believe this proposal is one we think the community can really strongly support," Papadakis says.

A second way this proposal differs from 2018 is that, unlike back then, there is no looming threat of the district having to pay up to $10 million for a parking garage so that students wouldn't have to pay for events. A couple years ago, there was discussion among city officials and the Public Facilities District that there might be a way to address that issue through land acquisitions, but nothing was set in stone. But now, Richard says they've received written commitments from property owners with major parking structures near the proposed site. That could make up to 1,100 spots available, Richard says.

Additionally, Richard says the Public Facilities District would make spaces they control near the Spokane Arena free for high school events, so students and families have no issues for school games. Parking studies have also identified thousands of public spaces within a quarter-mile of the proposed stadium, Richard says.

Thirdly, while the PFD had indicated in 2018 that it could operate the stadium if needed, it has committed to maintenance and operations costs for the downtown stadium as part of this pitch. They say that could save Spokane Public Schools $350,000 per year in maintenance and operation costs — all while the school district could use the stadium for free for all events.

Maybe none of this moves the needle for the voters who rejected the proposal in 2018. Even if voters have their parking and traffic concerns satisfied, in 2018 many felt the downtown space could be better used for something besides a stadium. Voters may also be uncomfortable with business interests trying to influence public dollars — school board member Nikki Lockwood last week said she was "surprised" there wasn't more private investment in the stadium if it's so important to private interests.

Richard argues the school board is using the money anyway. And as for the board's main concern — that voters already rejected this — he says the 2018 vote was fundamentally flawed. The advisory vote asking where to locate the stadium — either at Albi or downtown — was actually a city advisory measure, not a school district one. Only voters inside city boundaries got a say, excluding 10,000 residents who live in the district but not in the city, yet still including city voters not within school district boundaries. In the end, voters up north, closest to the current Albi location, voted strongly against moving the location downtown. The strongest support for the downtown idea came farther away from Albi, on the South Hill.

WHAT HAPPENS IF THE BOARD SAYS NO?

In December 2018, school board member Jerrall Haynes said he supported the downtown stadium idea "until election night." The advisory vote was nonbinding, but when voters said they didn't want it, he argued that putting a stadium downtown anyway would damage public trust.


Haynes is now the school board president. And Richard admits that making this pitch to the school board again now is a "huge gamble." But he also says that if the board says no, then it's not the end of the idea.

Richard credited Spokane County Treasurer Michael Baumgartner with reviving the proposal a year ago. At the time, Baumgartner presented figures indicating a stadium could be built for less than the $31 million the district has for one, suggesting that could be a route taken without school board involvement.

If the board says no, Richard says, then the money for a downtown stadium may be raised privately. The $2 million from USL, he says, is the "baseline," and he says there's another $1 million from a private investor who "prefers not to be identified at this point."

And in that case, the voters who rejected the downtown stadium may get one anyway, along with the other stadium up in northwest Spokane solely used for high school sports and operated by the school district.

In an interview with the Inlander, Richard more strongly suggested that could happen, should the school district reject the downtown idea.

"I will say this," Richard says. "I think the folks that I'm working with feel passionate enough about this that they would like to continue, because they believe it's got such great value." ♦