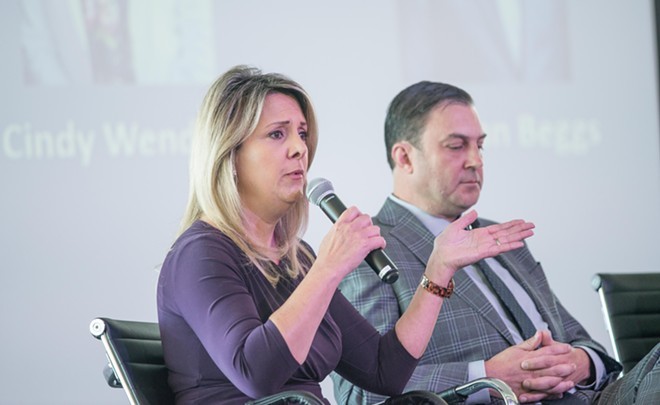 If you believe Nadine Woodward and the growth-at-any-cost types who support her, you would conclude that downtown Spokane is a mess. Their message is that David Condon and Ben Stuckart have presided over a city in decline. You want proof? Look, we have homeless people!

The truth of the matter is that downtown Spokane, for more than a decade, has experienced an urban renaissance. Stuckart has played a leadership role in all this. Woodward, meanwhile, has zero experience with governance. Nor, apparently, based on her public utterances, does she have a clue about what makes cities tick.

A few months back, when asked what her "Spokane Solutions" slogan referred to, Woodward initially did not offer any solutions. Later she said she would listen to the people to learn those solutions. Really? It is customary for candidates to run on a platform, not the promise just to listen. Stuckart, on the other hand, is coming off two successful terms as council president. To use an old line we used when I worked in the Pentagon to distinguish between people who knew what they were doing and those who did not, Stuckart "knows his way around the building."

The big issue in the race is shaping up to be homelessness. Woodward recently suggested that the homeless problem is a drug problem, and the answer is to give the addict some counseling and treatment. If that fails? Apparently they go to jail.

Spokane does have a homeless problem — as do almost all cities in America. This problem goes way back. I left Washington, D.C., almost 40 years ago. Even then D.C. had a serious homeless problem. Many slept during the winter months on heating grates.

This is a problem to be grappled with via multiple strategies; there are no simple solutions. Stuckart is the one candidate who understands the problem and appreciates its complexity.

I suggest we also reread the late James Q. Wilson's famous article, "Broken Windows." Wilson made the case that to thrive, cities needed to avoid any evidence of neglect. Evidence of neglect will drive off the middle class, which is the lifeblood of all cities. Thus it follows that a "broken window" that isn't immediately repaired signals abandonment, which invites trouble. (Critics of Wilson's ideas often associated them with "stop-and-frisk" policing, but that was never part of his theory. Some in law enforcement cited his work incorrectly to justify such practices.)

We're doing a better at fixing Wilson's broken windows here. Simple improvements have made huge differences. Take South Perry — the city spent money, not a lot, on streetscape. Enough to send the message that the city cared, and we have seen results.

Those supporting Woodward's campaign, and her critique of Spokane, have a transparent agenda, and it's nothing new. The realtors and homebuilders don't like the city's comprehensive plan that guides growth and leads to urban investments like on South Perry. What they really want is for the city to invest more in infrastructure that can connect the city to sprawling development beyond city limits.

The things that Stuckart and Condon have worked on together these past seven years are aimed at strengthening the city core, to keep the middle class in the city. There's the restored Riverfront Park, Kendall Yards and its vision of urban infill development, improvements on East Sprague and North Monroe, an expanded array of medical facilities (including two medical schools), along with all the new restaurants around town that seem to mark every healthy city.

Does the homeless problem grow as your city thrives? That appears to be the case in places like Seattle and Portland. It will be a challenge for every future mayor of Spokane. Stuckart has a plan that is being implemented in cities across America. It follows the guidance of the federal government and the advice of experts in the social service fields. Woodward would toss all that out and start over by, apparently asking the citizens to come up with something better.

To keep our urban renaissance going and to combat those big-city challenges it brings, we need a mayor who knows his way around the building. ♦

Robert Herold is a retired professor of public administration and political science at both EWU and Gonzaga University.

The original print version of this article was headlined "Fixing Windows"