"Pre-Freeman, we could go weeks without having to get this team together," says Chris Moore, coordinator of elementary student services for Spokane Public Schools. "Since Freeman, we've had a couple every week."

Moore is part of the district's threat assessment team, formed a year and a half ago to address threats of violent or assaultive behaviors. And since Sept. 13, the day a student shot and killed another student and injured three others at Freeman High School, the team has heard more troubling reports.

"I think there is a heightened sense of awareness of student behavior," Moore says. "And people are coming forward."

They're not the only ones. Shock waves from the Freeman shooting can be felt in schools all over the region.

Spokane County Sheriff Ozzie Knezovich says his investigators looked into multiple school threats in the days immediately after the shooting. On Sept. 21, students in Colfax School District, 60 miles south of Freeman, told police that a fellow student wrote, "I'm going to shoot up the school" on social media. To the west, Reardan-Edwall School District temporarily went on lockdown after it was discovered that a student posted pictures of himself holding an AR-15 on Facebook and Snapchat. He wrote that he was "ready to gun down some bitches."

It's the ripple effect following a school shooting: News of one shooting, research suggests, may inspire others. Simultaneously, students and authorities have become more vigilant in identifying threats that, if left alone, could potentially cause another tragedy.

It raises questions about how schools, and the media, should respond in order to minimize the effect. 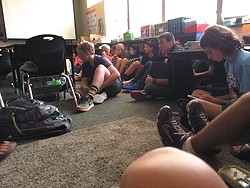 Students huddling in a nearby elementary school during last month's shooting at Freeman High.

Becky Berg has seen it happen before. Berg was superintendent of Marysville School District when five teenagers, including the shooter, were killed in an October 2014 shooting at Marysville-Pilchuck High School, north of Everett, Washington. In the weeks afterward, the district received multiple bomb threats, one of which had enough merit that students were evacuated to the same spot they were on the day of the shooting.

"It's a phenomena that people in the business know about," Berg says. "It was new to me."

Yet in Marysville, these weren't students making threats. They were "sick" people, Berg says, who heard about the shooting from the media.

Towers was the lead author of a 2015 study entitled "Contagion in Mass Killings and School Shootings." It found that up to 13 days after a school shooting, in incidents with four or more people killed, the likelihood of a similar incident increases. (It also found that prevalence of firearm ownership is associated with incidence of mass and school shootings).

The study suggests that the contagion effect has to do with mass media's portrayal of the incident, which may inspire similar events.

"Kids seem to be impressionable when it comes to these kinds of things," Towers says.

Overall, research on school shootings, and gun violence in general, is thin, Towers says. Federal funding for gun violence has been all but cut off for decades, and Towers says researchers like her, who are interested in gun violence, "have to do this as a side job."

Moore says she sees students in Spokane Public Schools react to local incidents much more than national shootings they may see in the news. It's the proximity, and social media, that plants the seed for students, since many interact with students from other districts often.

"Kids are really connected, more so today than they were even 10, 5 years ago," Moore says.

Jerry Pugh, Colfax School District superintendent, says the fact that Freeman is close by and rural has heightened tensions.

"Freeman is a close district," he says. "These kids interact with each other through club volleyball, AAU basketball, drama, band or whatever it may be. They know kids up in Freeman, and it certainly has caused some consternation."

He was thankful that two Colfax students reported that another student had threatened to shoot up a school, he says. It was a "credible" threat to the high school, says Pugh.

"What we had was two students who really heroically saw something that was a potential disaster for us and was dangerous, and they came forward," he says.

Marcus Morgan, Reardan-Edwall School District superintendent, says he's not sure if the Freeman shooting inspired increased threats recently, or if everyone is looking out for threats more. But either way, he says, it's changed things for the district.

"In a rural district, we think we live in these bucolic conditions, where nothing is going to happen. Things like Freeman scare us," Morgan says. "It shatters that trust."

With the community reeling, Sheriff Knezovich stood in front of a cluster of microphones, facing a group of reporters on Sept. 14. A day earlier, Knezovich told a mother that her son, Sam Strahan, was killed when a shooter opened fire in Freeman High School's hallways.

Knezovich described the shooter as a young man, sucked into a culture of violence that's "enamored with school shootings."

"And media, you are to blame for that because you keep giving these people headlines," Knezovich says. "You keep using their names. You have made them heroes to some people."

Knezovich knows that the media has to report on school shootings. He tells the Inlander that it boils down to not giving the shooter infamy — something he sees happen more on a national level.

Towers says it's likely impossible for media to agree not to report something like the background of a shooter. The public still thirsts for that information. Even as Towers talks, she admits she is listening to news about the shooter who killed at least 59 people in Las Vegas on Sunday night, because she's interested in learning more about him.

"That's why they run these stories," Towers says.

Moore, with Spokane Public Schools, says that building relationships with students can help minimize the local effect of a tragedy like a shooting or a suicide. It's important that students remain aware of any signs of trouble and report them.

Schools and the media, she says, should focus on how to support students after a tragedy like a shooting.

"Instead of focusing on the tragedy, it should be, what do we need to do to support students, and build relationships with them?" Moore says.

Knezovich says the reasons why more kids seem to have made threats after the Freeman shooting go back to the societal problems he discussed the day after the shooting itself. It's the glorifying of violence, a crumbling mental health system, and a school system hamstrung by the push to curb exclusionary discipline.

For now, he says, it's a good thing that, in the aftermath of a tragedy, people are paying attention and willing to report potential threats more than they used to. In the press conference the day after the Freeman shooting last month, somebody asked if the sheriff could have done something to prevent the Freeman shooting, if he had heard the shooter's previous threats.