Daniel Walters photo
Spokane GOP chair Brian Steele at a meeting where they debate how to address the Matt Shea situation — behind closed doors.

At the board meeting on the evening of Jan. 7, the Spokane County Republican Party has plenty to talk about.

There’s a lengthy discussion about the cost-benefit analysis of buying a new printer. The executive board endorses President Donald Trump for a second term. There’s a celebration for former U.S. Rep George Nethercutt. They talk about the organization's budget and precinct committee officer training. Board member Debbie Schupp is having her birthday and brought orange cupcakes for everybody.

Oh, and then there's this item: The matter of the elected state representative who was accused in an independent investigation of taking part in an act of "domestic terrorism."

The Spokane GOP had a binary choice to make: Were they with Washington state Rep. Matt Shea or against him?

The investigation into whether Shea, a Republican state rep from Spokane Valley, promoted or participated in political violence made international news when it concluded that "Representative Shea presents a present and growing threat of risk to others through political violence," in particular citing documents revealing Shea's involvement in providing support and intelligence to the occupiers of the Malheur National Wildlife Refuge. It resulted in Washington state House Minority Leader J.T. Wilcox booting Shea from the Republican caucus — a move U.S. Rep. Cathy McMorris Rodgers explicitly endorsed.

But Shea and his supporters cried foul, arguing he was a victim of a hit job from a biased investigator, and Wilcox was playing right into Democrats' hands. In some counties, local GOP organizations issued condemnations — not against Shea, but against Wilcox.

In a December statement claiming that the report was authored by a "far-left socialist democrat contributor and Marxist with political bias," the Grays Harbor Republican Party announced that it "fully supports Matt Shea and strongly condemns the actions by the House Republican Caucus Leadership."

The Kitsap County Republican Party declared that "House Republican Leadership has denied Rep. Shea the right of due process and the right of open justice without unnecessary delay."

And in Spokane, a number of local Republican precinct committee officers were urging the Spokane County Republican Party do the same, passing around a proposed resolution calling the investigation "highly biased and demonstrably inaccurate" and claiming that Wilcox "effectively denied Representative Shea the right to rebut the investigation's findings and conclusions."

Local GOP district leader Tim Benn, the perennial City Council candidate, spots me watching the proceedings from the chairs in the back and asks a pointed question: Are these meetings open to the public and the press? They are — though the GOP won't allow me or anyone else to record these meetings.

Besides, when it came time for the really juicy stuff, I was kicked out of the room.

Spokane GOP Chair Brian Steele had already requested the Shea situation be held in a closed-door executive session — for executive board members only.

So instead, for nearly two hours, I sit with three similarly exiled Republicans, including former Spokane City Councilman Mike Fagan, in the nearby Spokane GOP offices. At times, we can hear the tense sounds of raised voices debating through the walls.


At one moment, Fagan's frustration boils over: Can you imagine the hypocrisy, he says, if the GOP refuses to put out a statement defending Shea on the very same night they endorsed Donald Trump?

When the executive session is over, however, the Spokane GOP doesn't quite say what they're planning on doing.

On Friday, Jan. 17, Shea is greeted by a cheering crowd of hundreds at a gun-rights rally in Olympia, where he condemns the investigation as a “Marxist smear campaign.”

Instead, it lays out a series of principles: On the one hand, the Spokane GOP "categorically rejects any attempts to use violence, coercion, or intimidation." On the other, the party condemns "attempts to broadly label active citizen groups as terrorist or the making of defamatory aspersions without evidence" and argues that "inflammatory public statements to the press and media do not constitute either fairness or due process."

"As far as Matt Shea’s concerned, we’re not the judge of what happened, the voters will have to be," Daines says.

On the other hand, Daines says, they didn't feel the investigative report into Shea was worth much — and felt it came across as inflammatory and biased. But, Daines says, some local Republicans were frustrated that Shea hadn't yet directly answered questions from some of those within the party.

"Lots of our members tried to talk to Matt Shea — there were people who he probably did not see as his supporters — and he did not respond," Daines says.

For nearly a decade, the Spokane GOP has been divided by controversies about Shea. Time and again, Republican leaders have tried unsuccessfully to heal the party rift represented by the divide between Shea and Spokane County Sheriff Ozzie Knezovich — each of whom has portrayed the other as dangerous.

And, in a way, the statement has united the two sides of the Shea debate, each of which accuses the statement of being mealy-mouthed.

"It was about as spineless as a jellyfish. It had about as much bite as a bowl of vanilla pudding," says Jay Pounder, the former Shea ally who was one of the biggest sources for the independent Rampart report. "It’s very obvious to me that Brian Steele and his group absolutely doesn’t want to take a position on that, because there are hardcore Shea people within that camp. It pissed off everybody."

"This has to be the most impotent and vague statement about current affairs in our county I’ve read," writes Rowe. "I’d respect y’all if you drew a line one way or the next. This right here seems like 'we don’t want to piss off voters' political speak."

The view from Shea supporters were similarly savage.

"This is embarrassing," writes Shea supporter Jaclyn Gallion on Facebook. "Was the Spokane GOP drunk when they wrote this?? What are they even trying to say?"

And Fagan, the former city councilman, responded on his own Facebook page with a series of memes, including this one featuring beloved child TV star Baby Yoda: 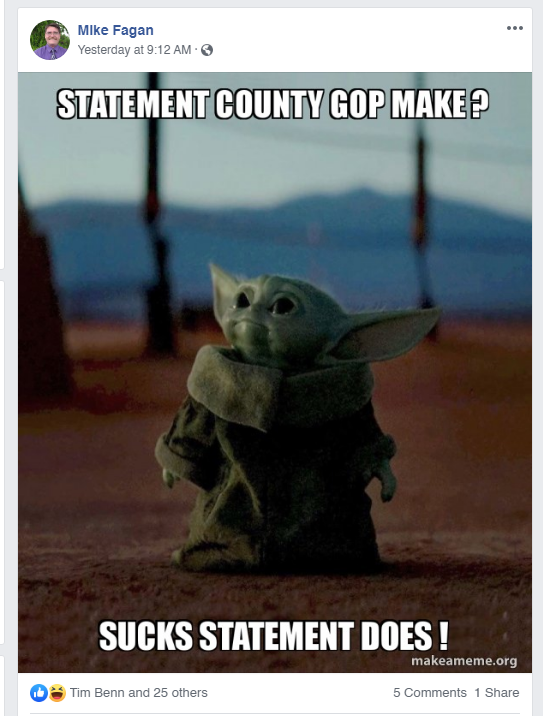 But Daines suggests the Spokane GOP is big enough to include both those who love Shea and condemn him.

"The party’s a big tent," Daines says. "He has a lot of supporters and he has people who are not in support of him. ... The voters in the 4th [legislative district] are the ones who have to decide."

The Spokane County GOP categorically rejects any attempts to use violence, coercion, or intimidation in pursuit of political goals and condemn any person or groups that advocate those tactics.

We use civil discourse and reason to advance our party platform and intrinsic values.

The Spokane County Republican Party reaffirms our commitment to the United States Constitution and our individual rights as articulated in the Bill of Rights.

Freedom of speech, the right to peaceably assemble, the right to keep and bear arms, as well as due process and presumption of innocence until proven guilty, are among the rights most frequently attacked by dishonest political operatives.

In addition, we are very concerned by the attacks on personal property rights and land use issues.

We believe in fair public debate and accept that everyone may hold differing views on political issues.

Inflammatory public statements to the press and media do not constitute either fairness or due process.

We also condemn attempts to broadly label active citizen groups as terrorist or the making of defamatory aspersions without evidence.

We believe in the rule of law and urge all of our fellow citizens to help in building strength in our communities.