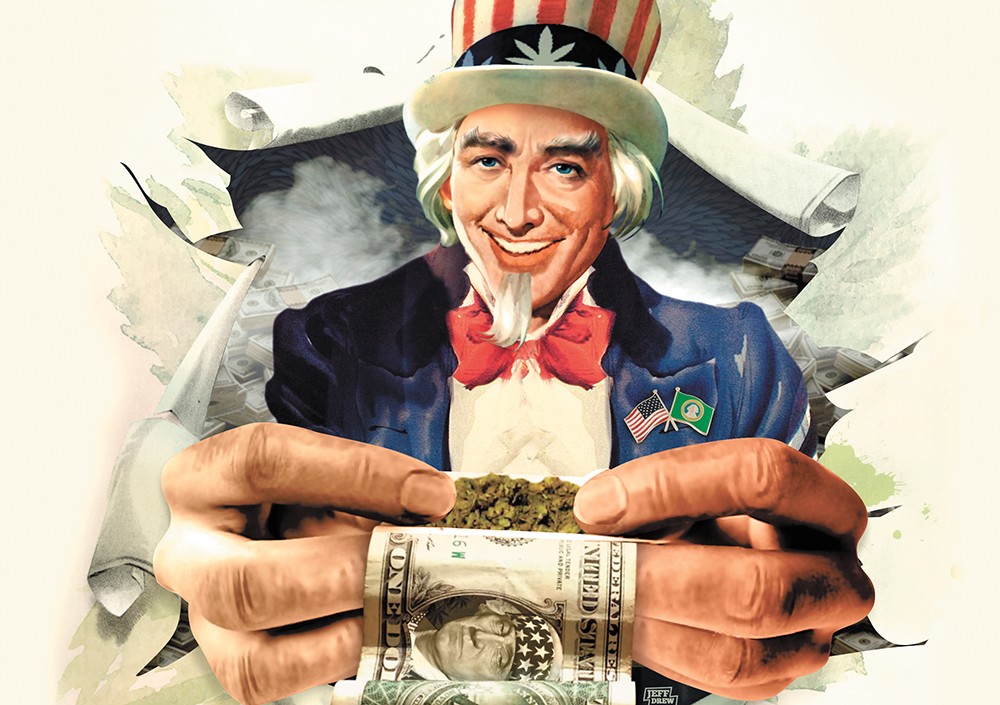 Jeff Drew illustration
To pay, or not to pay your taxes — that's the million-dollar question.

Still in shock from how much the Internal Revenue Service siphoned from your savings account this year?

For most Americans, the taxman is a tolerable nuisance, but, as dozens of "Tea Party" and "patriot" political groups learned during the 2012 presidential election, a little extra — possibly illegal — scrutiny from the IRS can have real-world consequences on the balance sheets. Just ask the "ganjapreneurs" of the marijuana industry who, thanks to an obscure regulation, must do battle with the feds every April.

"It's almost like they want us to fail," a Colorado cannabis store owner told USA Today in 2014. Because of a federal tax code amendment called Section 280E, which declares, "No deduction or credit shall be allowed for ... any trade or business ... consist[ing] of trafficking in controlled substances," business owners involved in the sale of marijuana can't write off any of the expenses associated with the "costs of selling," like rent, marketing or employee salaries. So instead of paying a corporate tax rate of 15 to 35 percent (of taxable income), like any other business, they're often faced with the unthinkable: rates between 80 and 90 percent, according to Denver accountant Jordan Cornelius.

"If (the federal government) can't put them out of business legally when voters are mandating these businesses to move forward, it's very easy to put them out of business financially," says Cornelius in an interview with USA Today. Whether or not that is actually the government's intent, the crippling tax burden means razor-thin profit margins, or bankruptcy, for some cannabis companies. Understandably, it's a hot-button issue on the streets, and in the courts. President Donald Trump's pick to fill the vacant Supreme Court seat, Judge Neil Gorsuch, even wrote the opinion in a recent court case concerning 280E (Feinberg v. Commissioner of Internal Revenue).

"You're kind of stuck," Derek Davis, an accountant from California, tells VICE, "because if you don't pay, you're evading taxes, which is a criminal offense. But if you do pay your taxes and you are compliant, then it gets a little gray in regards to the fact that you're in essence committing a federal crime." (Marijuana remains illegal federally.)

But now, as part of a "Path to Marijuana Reform," members of the U.S. House and Senate have reprised a failed attempt in 2013 to overturn the tax code amendment with the introduction on March 30 of the Small Business Tax Equity Act of 2017. Oregon Rep. Earl Blumenauer, a Democrat, is again leading the charge alongside a bipartisan brigade of cannabis advocates, despite having never taken a puff, as he acknowledges on his website. ♦