This time it's invisible

The last time we had to stay in our houses was after Mt. St. Helens blew in May of 1980. I was 10. We were playing baseball in the front yard when the sky suddenly got dark in the middle of the afternoon, so we went inside and hoped our mom would come back from the store soon. We didn’t go out again for days and then only with masks on our faces. I remember smiling at Fred, the old man who lived across the alley from us who was out walking around his ash-draped yard in a state of bewilderment, and seeing his eyes above his mask and realizing I didn’t know if he had also smiled.

This time the thing that is floating towards us is invisible. But we have seen the pictures of the doctors in masks and hazmat suits treating the victims and the growing numbers of the people who have tested positive and of people who have died. 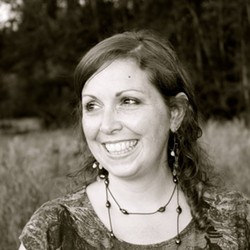 Laura Read is a poet and educator.

In these first days, I’ve been grading essays on The Bell Jar. In the preface to the 1996 edition, Frances McCullough wrote, “Although some [contemporary readers] found it depressing, others found it surprisingly undepressing. The issues, they pointed out, hadn’t changed.” My students tended to agree with this, writing essays that explored the ways in which they identified with Esther. This happens every time I teach the book, and I find it both sad and inspiring. Yes, Esther is a young woman suffering from mental illness and the pressures of the sexist society in which she lives but she’s also a woman who could turn that suffering into dark humor, startling images — like those black patent leather shoes waiting for her on the shore! — and a voice that makes young women all these years later say, yes, that’s it exactly.

On Friday, the 13th, I read an email that said Community Colleges of Spokane might be closing right before I went to my Women Writers class. I couldn’t tell the students anything definitive, but we talked about contingency plans for the first few minutes, and I said I’d email them that afternoon when I knew more. One student raised his hand and said he hoped we’d meet because he needs social interaction. Another student asked after class if we could at least meet on the last day to share our final projects. And then we talked about the ending of Alison Bechdel’s Fun Home. I had a hard time concentrating, which is not good if you’re the teacher, but the students just went on without me. They wanted to talk about the ending and why they liked the book and what it added to the other books, but then we were out of time and I said Goodbye and I’ll miss you if I don’t see you again, and then Summer said, But what’s the point of this book really? She comes out and her father dies? And then Alexis H. said, That is the point, it’s a graphic memoir, she’s saying look at me, this is my life, this is me trying to make sense of my life, see, there I am writing in my diary when I was 10.

I said, Yes, that’s it exactly.

That day’s class was ordinary and weird and incomplete, and now we won’t ever get back to where we were or pick up where we left off. During it, I kept thinking, This might be the last time and trying to pretend it wasn’t. I kept thinking how I learned at St. Aloysius grade school that St. Aloysius was once asked what he would do if he were told the world was ending in the next few minutes and he said he looked up from his game of chess and said he would keep playing.

That was over a week ago. When the deaths in Washington state numbered in the 40s. Now we’re in the 90s.

I read the students’ final projects today. They had to choose their favorite quotes from all the books we’ve read this quarter and present them artistically. Jaid made a recipe box, Alexis N. a cross stitch, Adeline designs for doll versions of all the protagonists based on the Teen Talk Barbie from the ’90s. In the corner of each one’s package, the copy reads, “She really talks!”

If you pull Esther’s, she says “New York is dissolving, all of them are dissolving, and none of them matter anymore, I don’t know them.”

Or Harriet Jacobs, “Reader, my story ends with freedom, not in the usual way, with marriage.”

Or the woman from “The Yellow Wallpaper”: “No one touches that paper but me — not alive!”

Or Mrs. Todd from The Country of the Pointed Firs, "Every such tree has got its own livin' spring; there's folks made to match 'em."

I would have loved to play with these dolls, especially when I was inside all those days in May of 1980. I would have walked around the house, trying to get anyone’s attention and pulling their strings to play their voices in new contexts to see how they sounded.

Which is exactly what I’m doing now. ♦

Laura Read is a poet and educator living in Spokane. She is the author of Dresses from the Old Country; Instructions for my Mother’s Funeral and The Chewbacca on Hollywood Boulevard Reminds Me of You. She teaches writing and literature at Spokane Falls Community College and previously served as poet laureate of Spokane.