My great-grandfather relives a lifetime of memories with Alzheimer's 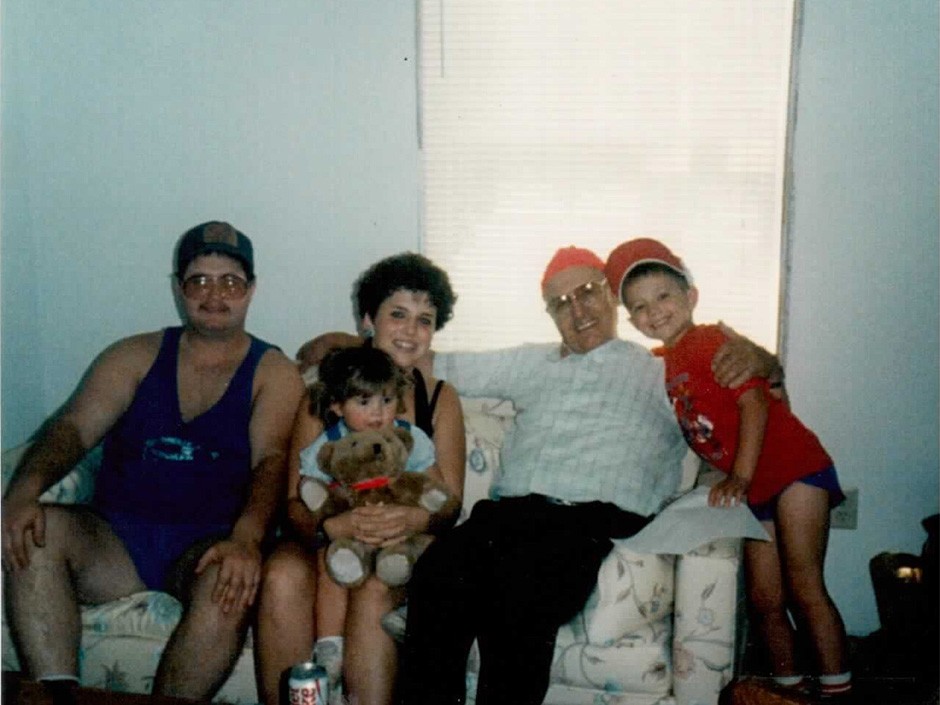 The author\'s parents, Brad and Jenny Byrd, with her great-grandfather and grandmother.

My great-grandfather is forever lost on Monumental Mountain.

The cowboy, Eagle Scout and war veteran left his family more than five years ago to pick huckleberries outside of Colville, Wash., and sing tales of herding cattle in Montana.

But he has never returned.

Somewhere along the way, the 91-year-old got lost in his memories. He’s forgotten the decades, the faces of his four children and the events in between. He’s lost in time.

He was born in 1921 on a cattle ranch in Scobey, Mont. He and his five brothers swam in the river with leeches and rode horses under the big blue sky across their father’s land.

Despite having Alzheimer’s disease, he still remembers the name of his first horse.

He married his high school sweetheart at 19, started a family and moved to Spokane. He played clarinet with a band in the United States Army while stationed in the Philippines during World War II, and danced the polka with his wife and daughters at a warehouse-turned-dance club in Spokane Valley.

He joined the Spokane Fire Department in 1943 and fought fires throughout the Lilac City for 28 years. My grandmother — his second daughter — remembers her mother and the other firemen’s wives chasing the fire trucks to make sure their husbands made it out of the flames alive.

After retirement, he bought a farm in Colville and returned to his ranching ways. My mother remembers him best clutching a bucket and picking huckleberries on Monumental Mountain. She says he periodically yelled “Huckleberry hound dog!” to scare away the bears.

More than 5 million Americans are lost like my great-grandfather, and there is no cure. One in three seniors die with Alzheimer’s disease or another form of dementia. Diagnosis means an 8- to 20-year life expectancy and the continual deterioration of brain cells. Side effects include complete memory loss, irritability or aggression, delusions and the inability to control bodily movement.

“Dementia takes away those things we cherish most as human beings — speech and memory,” says Pat Johnson, executive director of Clare Bridge of Spokane, an assisted living facility for seniors with Alzheimer’s disease and dementia. “When you have a cognitive illness, you are very much aware, although you may not be able to communicate.”

Clare Bridge houses 60 seniors. The posh facility features a Parisian cafe and floral-print living rooms. Roy Orbison occasionally blares through the speakers while seniors play Wii bowling. The facility aims to create a routine and a home-like environment. If a resident asks for their deceased spouse, caregivers say the person has gone out to coffee, gone shopping or fishing. Johnson says the goal is to “validate” their reality and the timespan or memories they are living in.

“People with dementia travel back in time, their memories are often 30 to 40 years ago,” she says. “We are constantly doing a magical dance with them. … We are constantly reinforcing who they were and what they’ve achieved in their lifetime because that’s what makes them human.”

My great-grandfather lives at Clare Bridge. He sleeps in a twin bed with a figurine of fireman boots above his head. My family has stocked his room with junk food and movies like Finding Nemo. He adores chocolate, hand-holding and cheap whiskey.

At first my family squabbled over the severity of his disease, and his ability to process names, the birth of grandchildren and the passage of time. Denial was easier than acceptance, but eventually the holes in his memory were too large to ignore.

For years, he seemed stuck in the saddle. He pretended to gallop in his armchair and every 10 minutes he sang one of two songs about Montana or riding with the herd and stepping in cow pies. The disease has not conquered his spirit and enduring sense of humor, but my great-grandfather doesn’t sing anymore. Some days he is alert and able to carry on a casual conversation. Other days, his bright blue eyes stare off into space.

Over the years, my family has mastered the magical dance that is Alzheimer’s.

We slyly introduce ourselves and tell him about our lives. We feed him Dilly Bars from Dairy Queen, intertwine our fingers with his and pretend that he will remember.

I ask my grandmother if he knows he has the disease.

In a sense, we too are stuck in time with him on Monumental Mountain. We are stuck in our memories, grieving the loss of a great man who still lives.

Some of his daughters remember him best dancing and playing golf. Others remember him in a picture as an Eagle Scout or on the front page of the newspaper, carrying a woman down the fireman’s ladder.

I picture him crashing through thickets of berries and scaring the bears.