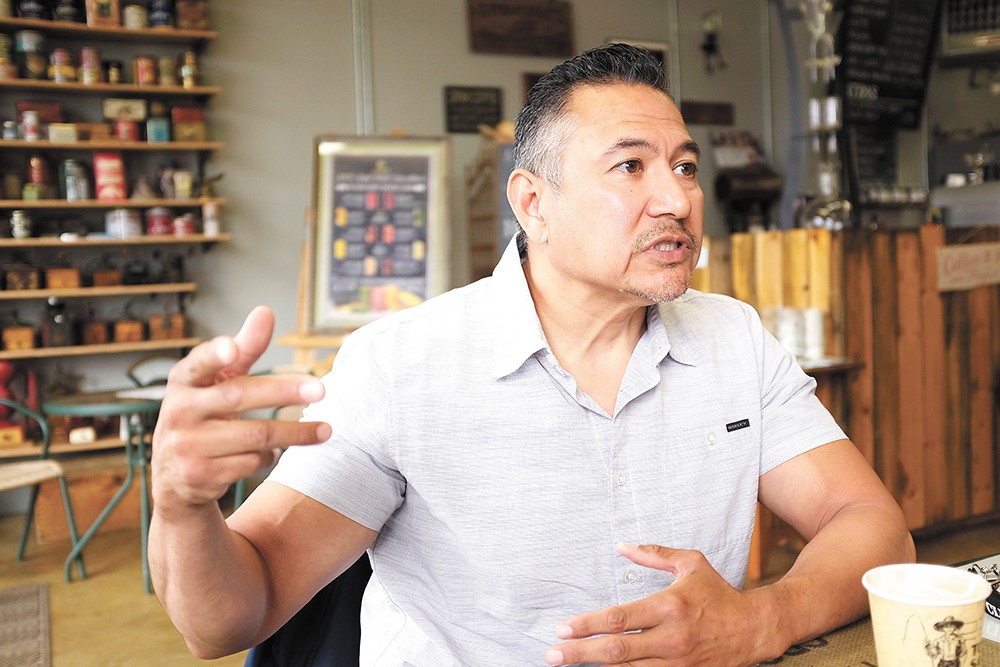 Young Kwak
Richard Aguirre says he hired prostitutes at least twice in Spokane, but says he does not recognize Ruby Doss, who was killed in 1986.

With allegations of rape, murder, voyeurism and witness tampering

piling up in multiple counties, a sinister portrait of former Pasco cop Richard Aguirre emerged. Prosecutors alleged that the 52-year-old with slick, silver-streaked hair was a predator with a badge, a man who'd eluded justice for decades.

Spokane County Prosecutor Larry Haskell hinted last year that investigators were planning a sprawling case that included hundreds of illicitly captured videos of people having sex. At one point, Haskell even accused cops in Pasco of leaking information to Aguirre.

Then, one by one, the allegations bolstered by DNA and video evidence began to fall.

First went the voyeurism and witness tampering — both dismissed without a trial.

Next, after a mistrial, a Franklin County jury took less than 30 minutes to acquit Aguirre of rape and assault charges earlier this year, despite his DNA found on the outside of the woman's underwear. It was his DNA submitted in that case that linked him to an unsolved 1986 murder of a prostitute in Spokane.

But now that case is stalling. The murder trial has been pushed to October, after Spokane County prosecutors asked a judge last week to postpone the case for a second time. Haskell and Spokane police officials declined to comment.

Meanwhile, Aguirre is free, released ahead of the trial, and his Seattle attorney, John Henry Browne, is poking holes in the evidence against him. Browne says that Spokane Police Detective Kip Hollenbeck's reports distort what witnesses told him in order to artificially bolster the case. Browne also claims that Haskell lied to a judge about crucial evidence, and now Aguirre's ex-wife, once a witness for the state, could end up helping Aguirre. Plus, the condom found at the 1986 murder scene and containing Aguirre's DNA is missing.

"I knew I would be found innocent," Aguirre says of the rape charge in Franklin County. "And if the system works the way it should, I know I will be."

Ruby Doss usually carried a knife when she went to work. On the night of Jan. 30, 1986, the petite 27-year-old in a rabbit-fur coat and red eel-skin boots took a cab from the motel where she lived with her boyfriend and 5-year-old daughter to East Sprague, where she worked as a prostitute.

At 9 pm, she bought a condom from a nearby bookstore, according to Spokane Police detectives' reports at the time of her death. Her body was found less than two hours later. A steak knife, a crumpled $50 bill, a black wig, earrings and a condom containing semen were found about 250 feet away from her body. Footprints between her body and the items, along with Doss' injuries, indicated that she had fought for her life, police say. Investigators concluded that she was strangled to death.

Spokane detectives tracked that case, along with the deaths of at least five other women killed in 19 months throughout 1986 and '87. Initially police said there was no connection, but in 2008, Hollenbeck suggested that one man may have killed all six women. So far, only two men have been brought to justice — one with the help of DNA evidence. Police identified at least two suspects in Doss' murder, including a rival pimp and a former Spokane public defender who committed suicide. But her case has remained unsolved.

In addition to a lost condom and disputed witness statements, here is how the evidence against Aguirre is being called into question:

• A condom containing semen was found near Doss' body in 1986. DNA tests on the condom match Aguirre's DNA, which was submitted in 2015 for the rape and assault charges. The condom has since been destroyed.

"If we had the condom, we could have tested it to see if it was even used on Ruby," Browne says.

• Aguirre's military records show that he was in South Korea for an extended period of time during 1986. One report from South Korea's Osan Air Base is dated Dec. 24, 1985 through Dec. 23, 1986. Browne says this document is objective proof that Aguirre was out of the country when Doss was murdered on Jan. 30, 1986.

But Haskell says a more complete reading of this and other military records call that alibi into question. The report, for example, shows that Aguirre was "under supervision" for only 180 days during the listed time period, leaving open the possibility that he didn't arrive in South Korea until after Doss was found dead.

Haskell also points to a handwritten report documenting Aguirre's visit with a counselor in South Korea, which reads in part: "Patient arrived in Korea 21 Feb. 1986."

Aguirre, when asked about the discrepancy, declined to comment, but says he recalls arriving in South Korea on Christmas 1985.

• Three reports written by SPD Det. Hollenbeck describe conversations with Aguirre's ex-girlfriend in 2015. According to Hollenbeck's reports, the former girlfriend describes a "depressed" Aguirre who admits to having sex with a prostitute, but denies killing Ruby Doss.

"Aguirre told [the woman], 'I'm not proud to admit it, but I had sex with a prostitute, and it was a mistake.' He then said, 'I had sex with her, but I didn't kill her,'" Hollenbeck writes, describing a scene where Aguirre is speaking with the woman and is referring specifically to an image of Doss.

But this year, when investigators hired by Aguirre showed Hollenbeck's report to the woman, she identified a total of 12 sections where she says that Hollenbeck distorted her statements to him.

• An email from Aguirre's ex-wife to Hollenbeck makes similar corrections.

"I also understand that I will not testify to what you wrote, but my concern is, if what you wrote is different than what I said, one of us will be viewed as untruthful," she writes. "I want to avoid that."

• Perhaps one of the strongest statements against Aguirre comes from his "lifelong friend" Lawrence Cole, who tells detectives that he and Aguirre used to go to bars and strip clubs together in 1986 and '87.

Hollenbeck writes: "After a 'night of drinking,' Aguirre admitted to Cole that he 'hit a woman in the head' and 'choked her.' Aguirre said when he 'walked away' he thought 'she was still moving.'"

Cole declined to answer questions when contacted by the Inlander.

Aguirre, for his part, acknowledges that Cole is a good friend. When asked about Cole's statements to police, Aguirre says, "I have no idea what he's talking about."

In court, Haskell presented as fact some of the evidence that's been called into question, such as the statements from Aguirre's ex-wife. Browne claims that Haskell knowingly misled the judge.

Haskell, through his assistant, declined to comment for this article, citing a rule that restricts prosecutors from speaking publicly about pending criminal cases. Hollenbeck also declined an interview request.

"As far as perhaps the pivotal issue, which is where Mr. Aguirre was during this time period, I suppose it is of some note to me that we don't have the actual records from the base that would show when he reported for duty and when he was discharged from duty, because obviously there was travel time, and there's obviously an order that shows when he arrived somewhere in the system," Clarke says.

For that reason, and others, Clarke rules that a jury should decide.

Richard Aguirre pulls up to a Spokane coffee shop in a silver BMW Z4 convertible — the one he says he had to sell to his family in order to help pay a bondsman to get out of jail.

Aguirre says that he spent a total of 305 days in the Spokane County Jail, in solitary confinement.

In addition to that $50,000, Aguirre says he's sunk nearly $250,000 into lawyers' fees for both the rape allegation in Franklin County and this homicide charge in Spokane.

Aguirre has been out of custody since April 2016, but it was only a week ago that a judge released him on his own recognizance.

"Nothing's changed between then and now," Aguirre says. "They let me walk out [of court] last week, but nothing has changed. Their lies are still there — the same lies that supported that $500,000 bond. How many other people do they do that to?"

During an hourlong discussion with the Inlander, Aguirre flat-out denies that he killed Doss. (In a report dated June 1, 2015, Hollenbeck writes that "Aguirre did not deny killing Doss" when initially confronted with the murder allegation, although it's unclear from the report if Hollenbeck asked him directly.)

Aguirre acknowledges that he visited prostitutes in Spokane "twice" but he says he doesn't recognize Doss. He also declines to talk about some specifics of the case, such as the reliability of his military records and how the condom containing his DNA ended up at the crime scene.