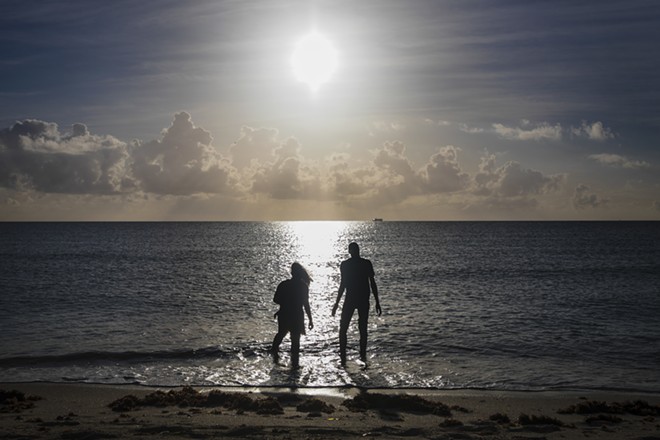 Scott McIntyre/The New York Times
People wade into the Atlantic Ocean in Miami Beach, Fla., Sept. 1, 2019. Earth’s oceans are under severe strain from climate change, a major new United Nations report issued on Sept. 25 warns, threatening everything from the ability to harvest seafood to the well-being of hundreds of millions of people living along the coasts.

WASHINGTON — Climate change is heating the oceans and altering their chemistry so dramatically that it is threatening seafood supplies, fueling cyclones and floods and posing profound risks to the hundreds of millions of people living along the coasts, according to a sweeping United Nations report issued Wednesday.

The report concluded that the world’s oceans and ice sheets are under such severe stress that the fallout could prove difficult for humans to contain without steep reductions in greenhouse gas emissions. Fish populations are already declining in many regions as warming waters throw marine ecosystems into disarray, according to the report by the Intergovernmental Panel on Climate Change, a group of scientists convened by the U.N. to guide world leaders in policymaking.

“The oceans are sending us so many warning signals that we need to get emissions under control,” said Hans-Otto Pörtner, a marine biologist at the Alfred Wegener Institute in Germany and a lead author of the report. “Ecosystems are changing, food webs are changing, fish stocks are changing, and this turmoil is affecting humans.”

For decades, oceans have served as a crucial buffer against global warming, soaking up roughly a quarter of the carbon dioxide that humans emit from power plants, factories and cars, and absorbing more than 90% of the excess heat trapped on Earth by carbon dioxide and other greenhouse gases.

But oceans themselves are becoming hotter, more acidic and less oxygen-rich as a result, according to the report. If humans keep pumping greenhouse gases into the atmosphere at an increasing rate, marine ecosystems already facing threats from seaborne plastic waste, unsustainable fishing practices and other man-made stresses will be further strained.

While the report recommends that the world’s nations sharply reduce greenhouse gas emissions to lessen the severity of most of these threats, it also points out that countries will need to adapt to many changes that have now become unavoidable.

To cope with these problems, coastal cities will need to build costly sea walls and many people will likely need to move away from low-lying areas, the report said. Fishery managers will need to crack down on unsustainable fishing practices to prevent seafood stocks from collapsing. Nations could also expand protected areas of the ocean to help marine ecosystems stay resilient against shifting conditions.