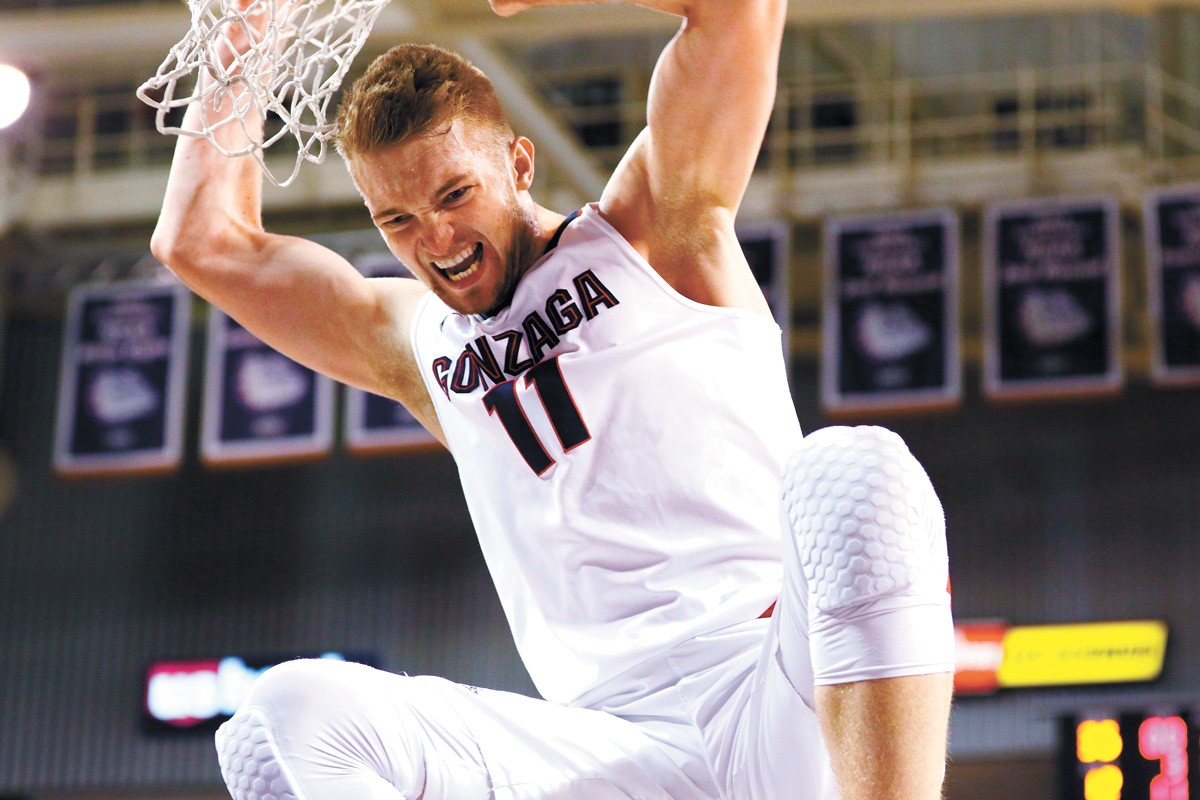 Gonzaga University Athletics photo
Domantas Sabonis went from dominating in college to stardom in the NBA.

Any big accomplishment is built on many smaller milestones. To really appreciate that view from the top of Everest or, say, the lifesaving launch of a new vaccine, you can't help but recall the small victories, the painful setbacks and all those lessons learned. So as the Gonzaga Bulldogs continue their quest for a national championship that started in 1999, here's a reminder of some of the most memorable moments and the heroes we met along these past 21 NCAA tournaments.

Florida; March 18, 1999
This was the Cinderella moment, when Gon-zahga from Spo-caine turned the college basketball world upside down with a 73-72 win on a last-second putback by Casey Calvary. Florida really was a Goliath, as mostly the same Gator roster made it to the championship a year later, losing to Michigan State.

St. John's; March 18, 2000
Powered by new head coach Mark Few, the Zags proved the year before was no fluke, taking down the No. 2 seed and winning a spot in its second straight Sweet 16. Matt Santangelo had 26 points, playing all 40 minutes; a few sportscasters started pronouncing "Gonzaga" correctly.

Western Kentucky; March 21, 2009
This was the fresh, new Cinderella taking on the prototype. The Hilltoppers were seriously feisty, and it took a less-than-last-second shot (like, 0.9 seconds) by Demetri Goodson to put them away. Fun fact: Goodson switched to football and played three seasons for the Green Bay Packers.

South Carolina; April 1, 2017
This was a classic college game played by two great teams. Still, somebody had to lose — with a trip to the championship on the line. Zach Collins had 14 points, 13 rebounds and six (!) blocks, previewing the skills that led the Portland Trailblazers to draft him 10th overall two months later.

Florida State; March 28, 2019
The Seminoles of the ACC are well-coached, super-athletic and very intimidating. In the 2018 tournament, they bullied the Zags and ended their season. In the rematch, Rui Hachimura and Brandon Clarke delivered the payback, sending the Zags to their fourth Elite Eight.

Mike Miller, Florida; March 18, 1999
As a freshman on a stacked team that also featured Udonis Haslem, Miller got 10 points and 11 rebounds in losing to the upstart Zags. Miller left college after leading the team to the final in 2000, and later was NBA rookie of the year and a two-time NBA champ with LeBron James in Miami.

Richard Hamilton, Connecticut; March 20, 1999
In his final season with the Huskies, "Rip" Hamilton led his team to the NCAA championship — but only after having to squeak by the Cinderella from Spokane. He had 21 points on 9-14 shooting. He took his smooth shooting to the NBA, winning a championship with Detroit in 2004.

Steph Curry, Davidson; March 21, 2008
This was a trap all the way. The 7-seeded Zags get sent to North Carolina to play a local team with a skinny kid who apparently could shoot pretty well. That kid? The now-legendary Steph Curry. He hung 40 on Gonzaga, with eight three-pointers, on the way to beating Gonzaga and nearly leading his team to the Final Four.

Ty Lawson, North Carolina; March 27, 2009
What started out as a demonstration of the beautiful game by both sides quickly got out of hand as point guard Ty Lawson orchestrated a masterpiece with his stacked ensemble (Danny Green, Tyler Hansbrough, Wayne Ellington). The Tar Heels went on to win the tournament.

Jimmer Fredette, BYU; March 19, 2011
It's easy to forget, but BYU used to play in the Mountain West. In fact, 2011 was their last year before moving to the WCC. Jimmer Fredette was the biggest college scoring sensation since Adam Morrison, and he did not disappoint with 34 points, including seven three-pointers, in an 89-67 win.

Dan Dickau v. Virginia; March 16, 2001
When the Zags landed transfer Dan Dickau from the mighty UW, it served notice that the little team from Spokane was taking things up a notch. And his impact was on full display here, as he racked up 21 first-half points on the way to 29 for the game. Gonzaga needed every point in the 86-85 upset.

Adam Morrison v. Xavier; March 16, 2006
The scoring machine with the wispy 'stache was teased by Xavier fans throughout. But in the end, he shut them up by dropping 35 points, including two free throws to seal it. How much did he want it? He jumped into the scrum on a rebound, winning the ball and drawing that final foul.

Domantas Sabonis v. Utah; March 19, 2016
Jakob Poeltl is a great basketball player, now with the NBA's Spurs. He'd be showcasing his skills to scouts in this one against Domantas Sabonis — maybe the only recruit to pass on a $630,000 European contract to play for GU. Sabonis had 19 points and 10 rebounds; Poeltl had 5 points and four rebounds.

Brandon Clarke v. Baylor; March 23, 2019
When you play for San Jose State, not everybody knows your name. But when you transfer to Gonzaga, then go nose to nose with Zion Williamson and beat him in Maui, people get to know you. Clarke's stat line against Baylor later in March Madness looks like a misprint, but it's not: 36 points, eight rebounds, five blocks.

Arizona; March 22, 2003
But for a couple bounces, Gonzaga nearly pulled off the upset of the No. 1-seeded Wildcats, finally falling 96-95 in double overtime. Both teams had plenty of firepower, with Luke Walton and Channing Frye going up against Rony Turiaf and Blake Stepp. Tough loss, but a definite character-builder.

For the second time in school history, Gonzaga is heading to the Final Four. And they're doing so on one of the most impressive college basketball runs in history. After an undefeated regular season — a season anything but "regular" thanks to COVID-19 — and run through the West Coast Conference tournament, the Zags dispatched Norfolk State, Oklahoma, Creighton and USC to make it to the Final Four. If they win their next two games, Gonzaga will bring a national championship to Spokane, and be the first undefeated men's college basketball team since Indiana in 1976.

The Zags will play Saturday against UCLA at 5:34 pm Pacific time on CBS. A victory Saturday puts them in the national championship game Monday night at 6:20 pm.

UCLA; March 22, 2006
This one still hurts, as the Bruins went on an 11-0 run to finish the game, winning 73-71. NCAA co-player of the year Adam Morrison's tears flowed after the buzzer; two UCLA players helped him off the floor in a show of sportsmanship they still play on highlight reels.

Wichita State; March 23, 2013
Gonzaga earned its first-ever No. 1 seed, but they ran into a buzzsaw in fellow mid-major Wichita State, which hit 14 three-pointers including, at one point, five straight. The Shockers were for real, making it to the Final Four as a 9-seed and going undefeated the next regular season.

Duke; March 29, 2015
So this is what it feels like at the grown-up table. Starting in 2014, Gonzaga ended their next four seasons against Arizona, Duke, Syracuse and North Carolina. Championships ain't easy. Missing a chance to pull into a tie late against an uber-talented Blue Devils squad, the Zags lost by 14.

North Carolina; April 3, 2017
After a tough loss to Villanova in the 2016 Final, the Tar Heels turned it around to win a bit of a weird championship game with lots of whistles and 52 total free throws. Still, the squad from Spokane did everyone very proud and gave us a taste. Four years on, it lingers and Zag Nation wants more. And here we go... ♦