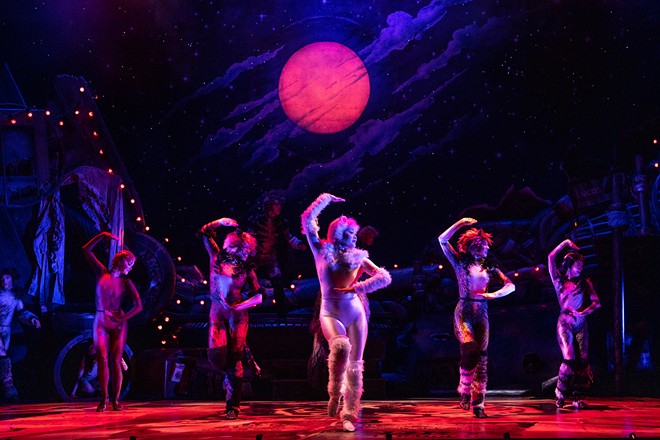 courtesy photo
[From left] Lexy Bittner as Cassandra, Chelsea Nicole Mitchell as Bombalurina, Hyla Mayrose Perillo as Victoria, Lauren Louis as Demeter, and Alexia Waites as Tantomile in the 2021-2022 national tour of CATS.

It’s a classic, it’s divisive, it’s CATS! After an 18-month-long intermission from live theater, CATS is running this week at the First Interstate Center for the Arts. And what a comeback it is.
The premise is simple: A group of cats, who call themselves the Jellicle Cats, get together every year at the Jellicle Ball to decide which of them is going to rise up to the Heaviside Layer to be reborn and given a new Jellicle life.

Anyone who has seen CATS knows that it’s more of an experience rather than a cohesive story, which is definitely off-putting to some; however, I bet you’ll leave the theater with at least one soft spot for a certain cat from the show.

After the tragedy that was the CATS movie (20% on Rotten Tomatoes has got to mean something, right?), the national touring cast seems to have given their absolute all to deliver a new CATS that can reach those classic theater fans, as well as a new generation of CATS lovers.
The theatricality that the movie lacked is clearly present here in the FICA.

The first three songs of the show melded into one another, the swelling melodies of Andrew Lloyd Webber along with the words from T.S. Eliot’s Old Possum’s Book of Practical Cats, making powerful musical statements. The Naming of Cats gives the background on how these cats get their unique names. After all, you don’t just get named Rumpleteazer without good reason.

Meeting Rum Tum Tugger (José Raúl Mangual) and Magical Mister Mistoffelees (Paul Giarratano) are highlights of the show, with flashy lights and even flashier costumes. Of course Grizabella (Tayler Harris), our main feline, steals the show with a rendition of “Memory” so remarkable that it’s easy to understand why she was chosen for the role. Every voice stood out, even among the numerous group vocal numbers littered throughout the show.

Though some theatrical elements were lost in set and lighting design, the choreography is what made this production worthwhile. Andy Blankenbuehler’s outstanding full-company choreography shines through, making it obvious that he had a hand in Hamilton’s smooth group numbers. Every company member showed off tremendous leaps, turns and footwork that didn’t go unnoticed despite the visual overstimulation that sometimes comes with a large group number.

Act 2 proved to be the stand-out section of the show. Gus the Theatre Cat, played by Tony Mowatt, pulled at heartstrings enough to get an audible “aww” from many. Not to mention the most upbeat song of the show, “Skimbleshanks the Railway Cat,” giving audience members visual stunts and thrills to boot.

I’ll be the first to admit it: I judged CATS before experiencing the magic that takes place in the theater. Sure, it’s a kitschy 80s Broadway show that’s been done more times than you can count, but if it’s got anything, it’s got heart.