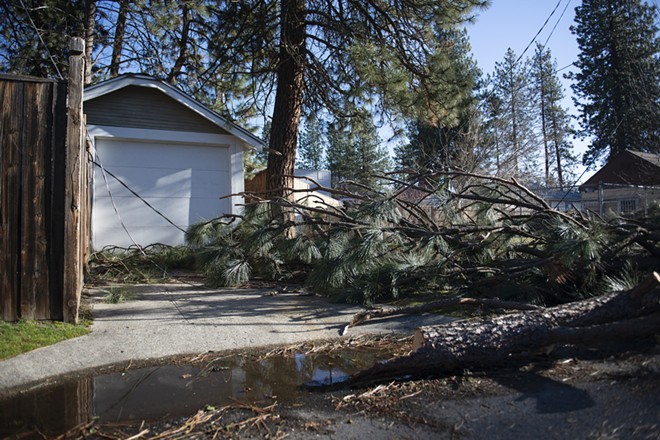 Derek Harrison photo
Thousands of customers throughout Avista's service area in Eastern Washington and North Idaho were still without power Thursday, Jan. 13, and could expect days more in the dark as damage from the windstorm on Wednesday is repaired.

Tens of thousands in the Inland Northwest could be without power through as long as this Sunday evening as Avista continues to fix damage from the Jan. 13 windstorm.

With the double whammy of severe winds that gusted into the 50s and wet soil from days of rain, trees throughout the region lost major branches and many toppled completely. The falling trees damaged cars, homes and power equipment, and killed one woman who KXLY reported was a doctor at Shriners Hospital for Children in Spokane.

As high winds continued throughout the day Wednesday, a flyover by helicopter crews to assess damage to power lines and other equipment wasn't possible, but that work was able to take place Thursday, which will enable Avista to give better estimates for power restoration, says David Vowels, an Avista spokesman.

"They patrol the lines, identify the lines that were impacted by the wind, tree limbs, etc., and then we’re able to formulate a plan for how long it will take to restore power to that span of line," Vowels says.

As of 3:20 p.m. Thursday, Avista was dealing with 1,431 outages across its service territory in Eastern Washington and North Idaho, affecting 33,715 customers.

The utility only counts customers based on power connections, and does not know how many people live at each residence affected, so the actual number of people affected may be much higher than that.

When restoring power, crews will first focus on fixing critical infrastructure such as transmission lines and substations, and getting power to critical places like hospitals.

Next, once the necessary lines have been fixed and critical customers are brought back online, the crews can focus on restoring power to distribution lines that may affect larger numbers of people. During that process, Avista warns that it's possible some people will see neighbors have their power restored while they are still waiting for their own restoration.

The utility has more than four dozen teams working 24/7 to clear vegetation and restore power.

Avista sent customers an update Thursday with estimates for restoration for different regions: 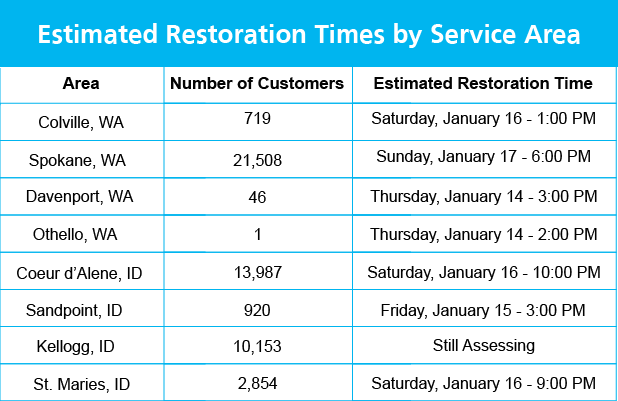 The utility emphasized the continued need for safety as power equipment is still damaged, especially with downed power lines. Do not drive over, touch or move downed power lines even if you think they're no longer electrified.

Other safety tips from Avista include:

Scenes around Spokane during the Jan. 13, 2021 windstorm