To honor local Jesuit history and announce the school's 125th anniversary, Gonzaga Prep tapped one of its own alums. 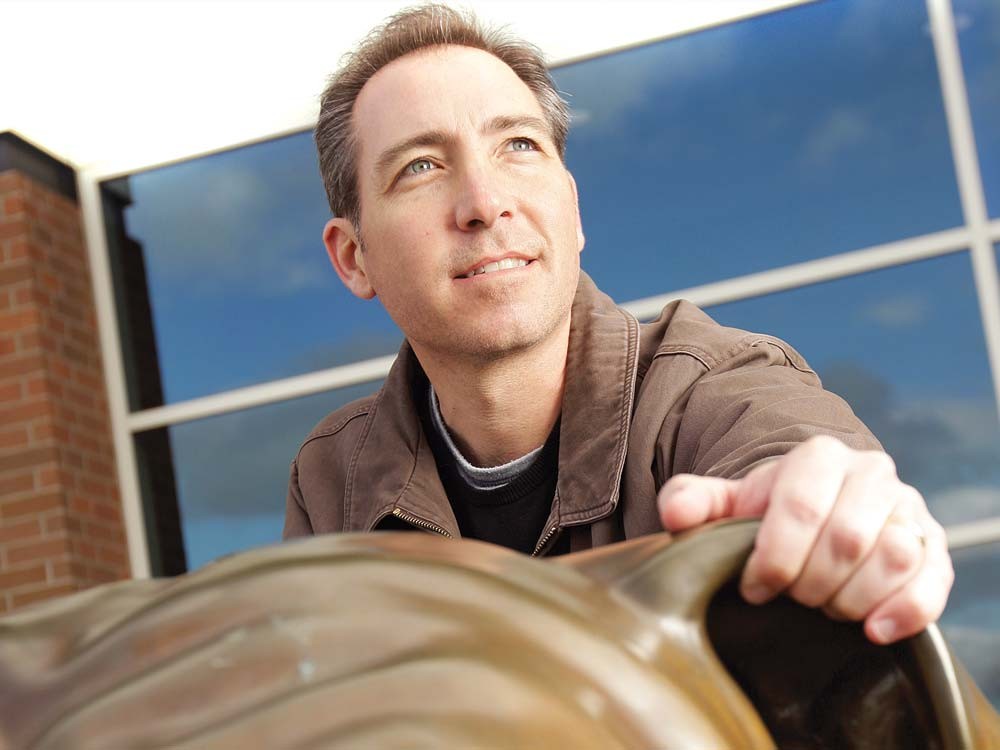 Young Kwak
Vincent DeFelice with his Bulldog outside the Kennel; his latest - and largest - sculpture, The Three Companions, will be unveiled this week at Gonzaga Prep

You might say Vincent DeFelice is on a mission, except he himself admits his path toward creating some of the area’s most notable religious sculpture wasn’t exactly pre-ordained. Still, DeFelice is quietly making a name for himself with pieces like Gonzaga University’s Father De Smet, as well as a soon-to-be installed commission commemorating Gonzaga Prep School’s 125th anniversary.

Located outside the Jesuit high school’s Chapel of the Three Companions, the larger-than-life sculpture exemplifies the school’s motto: Go forth and put the world on fire. It depicts three of the founders of the Society of Jesus, better known as the Jesuits. (See “Meet the Companions,” page 21.)

Although the bronze will be installed March 22, it is part a larger anniversary celebration that will occur in September, when the school will also begin fundraising for an endowment for “Fair Share,” a scholarship program for students interested in attending Gonzaga Prep.

“Prep isn’t just an academic institution,” says DeFelice, an alumnus (along with all his numerous siblings and his father). “It’s a community.”

While DeFelice seemed genuinely humbled by being chosen to do the piece, Gonzaga Prep Principal Al Falkner said he was a natural choice and praised his passion and dedication over the three years it took to complete the design. “It was a mind and heart experience,” says an enthusiastic Falkner.

Three years might seem lengthy, but DeFelice’s realistic yet codified style, his extensive research and his working life-size in bronze sometimes demand more time — pieces like Joe Albi Stadium’s lifelike bronze Fan, or Mr. Davenport reading his bronze newspaper at the Davenport Hotel (where DeFelice and his wife formerly ran Galleria DeFelice, representing Vincent, as well as nearly a dozen other painters and sculptors).

Then there’s one of DeFelice’s most notable secular sculptures: the Gonzaga University bulldog, which has likely figured into many a late-night double-dog dare (as in quick-climb-up-on-that-thing-and-I’ll-take-a-picture) since 2006.

More accurately titled “It’s Our House,” the Gonzaga bulldog may look cartoonish, but the design process was complex. While graciously posing next to, beneath and even on top of the five-foot tall bronze (we didn’t even have to double-dog dare him), DeFelice explains how his research included examining the English breeder’s standard versus the expectations of American bulldog fans, all against the context of the official Zag logo.

The chain around the dog’s neck, he points out, is a small but significant detail. It has a broken link; the other piece is attached to the building, right by the entryway. It symbolizes protection, loyalty and standing guard outside the McCarthey Athletic Center, aka “the Kennel.”

Although DeFelice sometimes builds a model, the bulldog is typical of his design process — working directly onto a full-scale armature of wood and wire. For the new Jesuit piece, it meant adjusting the ceiling of his “studio,” which he laughingly notes is just space cleared from among the kids’ bikes and other assorted stuff in the family garage.

Since this Three Companions piece would be more than seven feet high, it had to be constructed in sections, then reassembled. Thank goodness DeFelice has a large family, he laughs. It took a group effort — and some 50 sleeping bags — to pad the piece for its journey to the Oregon-based bronze foundry.

Family is all-important, says DeFelice, who initially attended Carroll College intending to pursue dentistry. He eventually returned to Spokane Falls Community College to earn his Associates in Design. Later he received a BFA from Eastern Washington University, falling in love with sculpture but also intrigued by the challenge of entry-level work at a fledgling North by Northwest Productions. (More than 20 years later, he is now art director for the Spokane firm.)

If he credits his parents together for encouraging him to complete his degree, it’s his mother whom DeFelice says helped direct his future towards bronze sculpture commissions. She insisted on putting his figurative bust of Jesus Christ into Gonzaga’s Chancery Building, DeFelice recalls. It got noticed.

He was then invited to compete for a commission at St. Joseph’s Church, which he won with his Memorial to the Unborn. The piece often generates an emotional response in the viewer, says DeFelice, who continues to get e-mails to that effect from visitors. His mother reports that people often leave little mementos around the sculpture’s base. “I’d like to know the thoughtfulness I put into it is not wasted,” says DeFelice of Memorial and his other sculptures.

It’s as if he’s trying to breathe life into metal. “It’s not just this thing of bronze,” he notes, “it means something to someone.”

To future students at Gonzaga Prep — as well as everyone who views the work of this spirited artist — the work of Vincent DeFelice is an enduring reminder of the power of creation.

The unveiling and blessing of Vincent DeFelice’s The Three Companions is Tuesday, March 22, at 5:30 pm at Gonzaga Prep, 1224 E. Euclid Ave. The blessing of the statue will be done by the superior of the Manresa community, Fr. Greg Vance, SJ. He will be accompanied by Frs. Kevin Connell, SJ, and Tom Lankenau, SJ. For more information, call (509) 489- 6302.

So who were the Three Companions being honored in bronze this week? Ignatius Loyola (1491-1556) was born in Spain to a Basque nobleman. After a tumultuous youth, which included time as a brawling courtier in the royal court of Spain and a soldier in the service of the Kingdom of Navarre, a cannon ball severely injured both his legs. His long recovery was made easier by reading and rereading Life of Christ and Lives of the Saints. When his health was restored, Loyola gained additional religious fervor as a pilgrim to holy sites in Spain, France, Rome and Jerusalem. At the age of 35, Loyola devoted himself to academics and began taking courses, ultimately in Paris, where he shared a room with Peter Favre (1506-1546) from Savoy and Francis Xavier (1506-1552) from Navarre. They became the closest of friends.

Upon finishing their studies for the priesthood, the friends decided to name themselves companions of Jesus: La Compañía de Jesús. Thus the Jesuits were born, and their legacy has spread over the centuries and across the planet — including to here in Spokane.

Pope Paul III assigned the three companions to duties in Rome, Spain, Portugal and Germany. Since they would be splitting up, they decided to take vows of obedience, thereby creating a formal religious order. The Pope conferred upon the Society of Jesus his official approval in 1540, and Ignatius, at the age of 50, was elected the Superior General. He was an organizational genius and spent the final 16 years of his life managing the new society, writing some 6,000 letters to his far-flung brotherhood.

Meantime, Francis Xavier spent nine months in Portugal, after which he journeyed to India as a missionary. It took him 13 months in a dangerous voyage to reach Goa in India. More hardships followed when he extended his ministry to Malacca, Japan and China. Xavier died on an island not far from Canton; his body was taken back to India where it remains enshrined in a basilica.

A brilliant student, Peter Favre was the first to befriend Loyola in Paris. Peter was among the first Catholic theologians to respond to the challenge of Protestantism. Considered an expert in the Spiritual Exercises of the Society, Favre’s diary, Memoriale, is his lengthy account of God’s action on his soul. Unlike his two companions, Peter Favre has not received sainthood. He was beatified in 1872 and remains a Blessed, the second-place title of the church. (Robert Carriker)