Time Names ‘The Silence Breakers’ Person of the Year for 2017 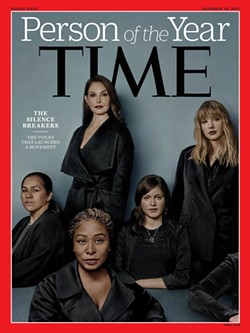 
First it was a story. Then a moment. Now, two months after women began to come forward in droves to accuse powerful men of sexual harassment and assault, it is a movement.


Time magazine has named “the silence breakers” its person of the year for 2017, referring to those women, and the global conversation they have started.

The magazine’s editor-in-chief, Edward Felsenthal, said in an interview on the “Today” show Wednesday that the #MeToo movement represented the “fastest-moving social change we’ve seen in decades, and it began with individual acts of courage by women and some men too.”

Investigations published in October by The New York Times and The New Yorker, both of them detailing multiple allegations of sexual harassment and assault against movie producer Harvey Weinstein, helped fuel the sudden rush of women coming forward.

In a joint interview after the choice was announced, Tarana Burke, who created the Me Too mantra years ago, and actress Alyssa Milano, who helped promote it more recently, focused on what was still left to do.

“I’ve been saying from the beginning that it’s not just a moment, it’s a movement,” Burke said. “I think now the work really begins. The hashtag is a declaration. But now we’re poised to really stand up and do the work.”

Milano agreed, laying out her aspirations for the movement.

It is a testament to the size of the movement that the set of “Today” itself, where the announcement was made, had recently been the site of such a reckoning. Matt Lauer, one of NBC’s most well-known personalities for decades, was fired last week after an allegation of sexual harassment from a subordinate.

Time’s 2017 runner-up for person of the year, Donald Trump, was accused during his presidential campaign by more than 10 women of sexual misconduct.