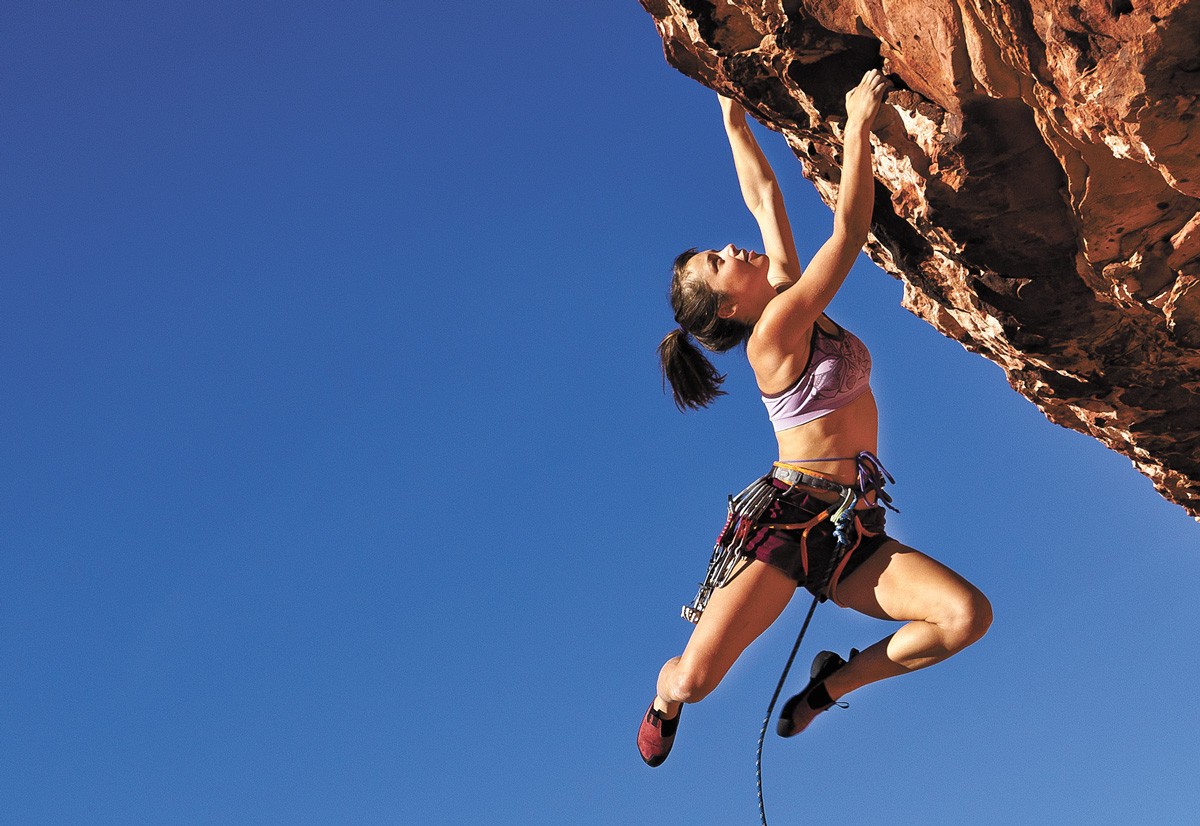 Kelty Godby says people will often tell him they're afraid of heights and could never go rock climbing.

His go-to response? "All climbers are afraid of heights; that's why we're alive."

Godby is the lead guide and owner of Inland Northwest Climbing Outfitters, which he founded in 2019. Over the past few years, Golby says interest in the sport has increased rapidly at both the local and national levels.

If you're looking to hit the rocks for the first time, you'll need gear. Godby says NW Outfitters and REI in Spokane are both good places to look. There are four main items you'll need to get started:

1) Climbing shoes. These should be tight, but not painfully so. They can be rented or purchased from most outdoor stores. You can also save money by buying a used pair.

3) A chalk bag. (Pro tip: If you're climbing in the winter, put hand warmers inside your chalk bag, your fingers will thank you later.)

4) A helmet. Some climbers don't see helmets as necessary, but Godby says they've saved his skull on multiple occasions.

Outdoor climbing also requires ropes, belay devices and anchor materials, but if you're climbing with someone experienced they should already have them, and you'll be set with just the four basics.

For first-timers, having someone to show you the ropes (pun intended) can be helpful. Godby says a dedicated person with a high risk tolerance can hypothetically piece together the basics from books and YouTube, but that some things are best learned from in-person instruction.

The Spokane Mountaineers offer regular classes in outdoor rock climbing. Godby also teaches beginner courses on his property outside Tumtum. Godby says one of the most important things a beginner climber can do is find a mentor who can push them and keep them motivated on their climbing journey.

Some new climbers learn the basics in indoor climbing gyms before heading outdoors. Godby, who learned to climb at the U.S Army's Northern Warfare Training Center in Alaska, says indoor training can be helpful, but it isn't necessarily required.

"I tell people that the gyms are a great place to go for training, but if you're going to climb outside, you should get outside early on and not just stick to the gym because it's going to get more and more intimidating," Godby says.

Once you do get outside, there are two main types of climbing to choose from. Sport climbing involves climbing on routes with permanently fixed anchors that provide fall protection. Trad (traditional) climbing involves placing your own anchors on the rock while you climb. Trad climbing typically requires more knowledge and experience, so beginners typically start with sport climbing.

Godby usually recommends beginners check out the Rocks of Sharon and Q'emiln, both of which have a number of good sport and trad climbs. If you're looking for something closer to Spokane, Cliff Drive and Minnehaha are popular spots.

The Spokane climbing community is growing rapidly. Godby says climbers in the area used to be more guarded with their routes, but over the past few years the sport has seen a surge in popularity and accessibility. There's still plenty of unexplored rock. Godby says he thinks there are more first ascents waiting to be climbed in the Inland Northwest than anywhere else in the country.

One of the biggest lessons Godby tries to impart on new climbers is the need to stay humble and aware of the potential dangers. Around six months in, many new climbers hit a point where they start to feel invincible and overconfident in their abilities, he says.

The climbing world is abundant with terminology and lingo. It's a good idea to study it. Once you get started, you may find that some of it applies to you:

The original print version of this article was headlined "Baby Steps"

Climber Jess Roskelley reached his 'pinnacle of achievement' before his death. Now his family is left searching for answers