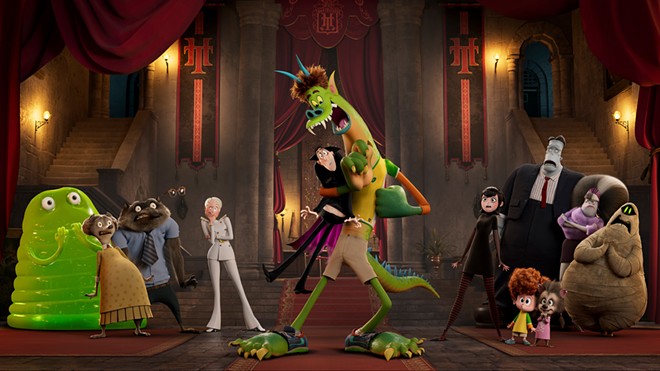 Not exactly a graveyard smash.

Like its monster main characters, the Hotel Transylvania animated franchise seems to be unkillable. The fourth feature film in the series, Hotel Transylvania: Transformania, has survived both the shift from a theatrical release to a streaming premiere on Amazon Prime Video and the departure of primary voice actor Adam Sandler (who also co-wrote the second movie). Director Genndy Tartakovsky, who helmed the first three movies, hands off those duties to Jennifer Kluska and Derek Drymon, directors of last year's Hotel Transylvania short film Monster Pets, although Tartakovsky remains on board as co-writer and executive producer.

All this upheaval doesn't make much of a difference in this annoying, formulaic series, which continues to provide largely the same lessons for its main characters. Count Dracula (now voiced by Sandler soundalike Brian Hull) still has trouble accepting that his vampire daughter Mavis (Selena Gomez) is in love with goofy human Johnny (Andy Samberg), despite three movies of Dracula and Johnny fighting and then bonding. Mavis and Johnny are married with a kid, but Dracula still agonizes over the idea of leaving them in charge of his monster hotel so that he can retire and spend more time with his own human love interest, reformed monster hunter Ericka Van Helsing (Kathryn Hahn).

Panicking at the last minute, Dracula lies to Johnny that he can't legally leave the hotel to a human, so Johnny naturally decides to use an experimental "monster ray" to turn himself into a monster. Thanks to yet more convoluted shenanigans, the ray also turns Dracula and a few of his increasingly superfluous monster pals into humans, before ceasing to function. In order to turn everyone back to normal (or abnormal), Johnny and Dracula must go on a quest deep into a South American jungle to retrieve a crystal that can power the monster ray.

There's more to the plot than in the last movie (which dared ask the question "What if the monsters went on vacation?"), but the core themes are essentially the same. Even with their roles reversed, Dracula and Johnny still need to learn to respect and value each other, while Dracula also needs to learn to trust his daughter's life choices. The lessons are half-hearted at best, and the voice actors sound as bored with the material as Sandler must have been. There's still plenty of slapstick humor for the kid audience, but it's mostly repetitive and tedious, without even the occasional sparks of quirkiness and creativity that Tartakovsky initially brought to the material.

Although the series has been an unlikely box-office juggernaut, at this point it seems better suited for streaming, where parents can turn it on for their antsy kids and then safely ignore it. Transformania has a clear sense of creative exhaustion, another perfunctory adventure for characters who've long since lost their distinctiveness. The animation is pleasant but unremarkable, with minimal visual flair in the new designs for the transformed characters, who mostly now look even less appealing. Dracula and Johnny go on what's meant to be an epic journey, but their surroundings always look generic, like they were automatically generated from a file of stock imagery for CGI animated family movies.

Compared to the artistic ambition and emotional complexity of 2021 mainstream animated movies like Luca, The Mitchells vs. the Machines, and Encanto, Transformania looks especially paltry, just an obligatory franchise continuation on the way to a new TV series or other brand extension. Adam Sandler isn't exactly known for his restraint, but in this case he made the right call to step away. Viewers would be wise to do the same. ♦

The original print version of this article was headlined "Monster Mush"