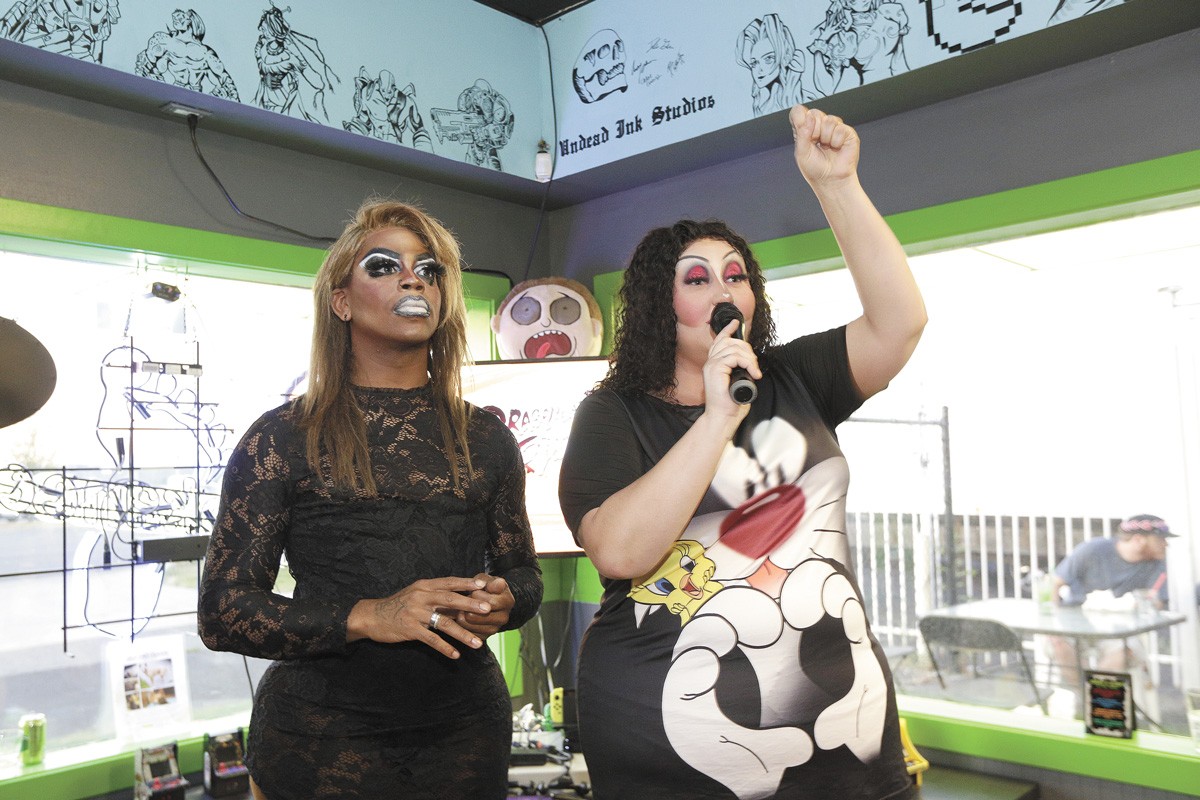 Drag is a form of art and self expression. For many, it's also a job.

On June 16, 20 drag queens walked away from the Globe Bar and Kitchen in downtown Spokane after a meeting with management and the owner went south. The group had called the meeting to discuss concerns over pay, working conditions and a lack of communication.

The 20 performers — who make up more than half of the Globe's regularly performing cast of drag queens — are calling themselves the Collective. They say they were talked down to and disrespected during the meeting and will no longer perform with the Globe.

"It comes down to valuing the work that we do and understanding what that all entails," says Chelle Crotinger, who performs in drag as Tirrany Reigns and is a member of the Collective.

The popularity of RuPaul's Drag Race reality show has catapulted drag into the mainstream, but for many local performers, the economic landscape is still uncertain. Crotinger says he hopes the Collective's decision to leave the Globe in search of better treatment can help inspire change not just in Spokane, but across the drag industry as a whole.

The Globe started marketing itself as a gay bar with frequent drag shows in September 2020. Because of COVID, performances were held in a separate room and streamed to the main part of the bar.

Crotinger says the Globe did not pay the performers at all during this time.

"We were existing solely on tips, which some weeks would be $3, $4 for at least 20 hours of work conceptualizing, painting, filming, editing videos," Crotinger says.

Crotinger says ownership never clearly defined the queens' role or status. Management would frequently tell him and the other performers that they weren't employees, and that they needed to operate accordingly. Crotinger remembers signing a code of conduct two or three years ago, but he was never given a copy of it and doesn't remember any other official paperwork.

Scott Wilburn, the owner of the Globe, did not respond to requests for comment after phone calls, emails, Facebook messages and an in-person visit to the Globe from the Inlander. Members of the management team also could not be reached for comment.

This spring, the Globe ended the streamed performances and started doing shows in front of a live audience. Crotinger says the standard rate was $25 for a performance that was two or three sets long. Tips were highly variable, but Crotinger estimated that on an average Saturday night he might make $30 to $50 in tips.

Most drag performers would be classified as independent contractors, which are exempt from Washington State's Minimum Wage Act. To determine if someone is an independent contractor, the Department of Labor makes evaluations on a case-by-case basis using factors such as permanence of the worker, degree of skill required for the job and how much control the business has over the worker.

There's a lot of labor and money that goes into drag. Crotinger spent over $700 on his outfit for a Pride month boat cruise on June 5. The cruise was two hours long, and Crotinger had to be there an hour early to greet guests. Before that, he spent several hours getting into his makeup and outfit. In the days leading up to the cruise, even more time went into planning and practicing the performance. The Globe paid the performers $15 each for the entire event on top of tips, Crotinger says.

Despite being told they weren't employees, Crotinger says it often felt like they had to follow a strict set of arbitrary rules.

On multiple occasions, the performers asked to put a fan on stage to help with the intense heat of the spotlights (and a windblown hair aesthetic). Crotinger says they were told no without being given a reason. He also says songs with the n-word weren't allowed, and performers were told they couldn't change out of drag until the end of the night after they'd been paid.

But the rules didn't apply to everyone.

The Globe books out-of-town performers on a semi-regular basis. On the weekend after the Pride boat cruise, the Globe booked Plastique Tiara, a well-known drag queen who has appeared on RuPaul's Drag Race. When Tiara asked to have a fan on stage? Crotinger says management was fine with it and didn't ask any questions. Tiara also left the stage multiple times during the performance, something Crotinger says the local performers were told they couldn't do.

Performers interviewed for this story say that they don't know Tiara's exact booking fee but that it was in the thousands. Tiara's booking agency did not reply to a request for comment. However, in a 2018 series on the economics of drag, the Stranger newspaper reported on how queens who had been on RuPaul often have booking fees in the thousands of dollars. That night, Crotinger says, the local performers were paid $15.

"They bring outsiders in and treat them like royalty, but the people that are actually here to help your bar stay afloat, we get treated like dogs," says Sativa Heather Black St. James, a member of the Collective who asked to be identified by her drag name.

Sativa and Crotinger both stress that their problem is with management and ownership, not with the outsiders who came in to perform. Tiara was wonderful to work with, they say, and even donated all of the tips she made during the Pride show to local performers.

Performers interviewed for this story declined to go into details about how much other venues in Spokane pay for drag performances, but they said the rates at the Globe were significantly lower. The Stranger reported in 2018 that most clubs pay a $30-$60 flat fee. Regular performers at Spokane's nYne Bar and Bistro are on the payroll and are paid by the hour.

Crotinger says it wasn't just about the money; the bigger issue was that they weren't being heard.

"We were advocating to the people that we were told that we were supposed to advocate to," Crotinger says. "They would float it up the line and then say, 'This is what they want,' and then the person at the top of the line would say, 'No,' and that's where the conversation would end."

Some of the regular performers started to discuss forming the Collective in May, but they kept it under wraps until two days after the Plastique Tiara show, when they sent a letter to Wilburn that outlined a list of terms and conditions and said they would stop performing at the Globe unless the terms were met in full.

The Collective met with Wilburn and the management team on June 16. To avoid the chaos that would ensue if everyone talked at the same time, the Collective chose Crotinger and Sativa to act as spokespeople. They clung to each other throughout the meeting.

"[The] Collective was just there to act as a steel wall," says Sable Jones St. James, who tuned into the meeting via FaceTime. (Sable is a drag mother to some members of the Collective; queens in the same drag family often use the same last name.)

Sable and the other performers describe an immediate air of disrespect and condescension. They say they were interrupted on multiple occasions and at one point were referred to as "spoiled brats." Sable, who was watching remotely, sent texts to the Collective group chat that said "LEAVE" and "GET OUT."

The Collective's first request was for payment to be restructured. The performers wanted a $25 booking fee, $25 per number performed and a cast performance budget of $300 a show. The Collective offered to forfeit their food and beverage discounts to help offset the cost.

The letter included a number of other requests, including a fan onstage, a meeting with ownership every three months, a restructuring of the performance schedule and for the Globe to issue a statement of public remorse for disparaging remarks made toward other venues.

The Collective also wanted an end to the ban on songs with the n-word. During the meeting, three performers interviewed for this story remember someone from the management team saying they wouldn't change the policy because "We don't do angry music here. I don't care if it's rap, hip-hop or White angry dude music."

"When you put me in a box and tell me I can't do everything else that's outside that box, I don't want to be there, because I feel like I'm not being able to express myself the way I feel I can and being my authentic self," Sativa says.

The Collective wanted to know within 24 hours if the Globe planned to meet the terms. Crotinger says they were willing to be flexible, but that management said it wasn't enough time. The performers say management and ownership told them what they were asking for wasn't feasible.

The meeting was already going downhill, but then one of the managers made a comment about how drag doesn't cost any money.

For Crotinger and many of the other queens, that felt like the final straw.

The meeting lasted about an hour. Afterward, the Collective decided that even if the terms were met, they still wouldn't want to come back after the way they had been treated. The drama escaped to social media. One member of management made a post alluding to "snakes and flakes"; another Globe staffer appeared to compare the event to the stabbing of Julius Caesar.

Several of the performers posted their accounts of the meeting on Facebook. Crotinger says this led to five members of the bar staff quitting. In a voicemail listened to by the Inlander, a member of the management team berates one of the bar staff for walking out midshift. "If you left because of something you read on Facebook, but did not bother to verify, then I guess I'm glad you left," the manager says.

Drag queens banding together for better conditions is rare, but not unheard of. In 2019, Alexis Atauri started Werk is Work, a campaign that aimed to ensure fair pay for drag performers in the Bay Area. Atauri said that drag queens, especially those from marginalized communities, are frequently undercompensated for their labor.

Atauri doesn't think a drag union is the solution but said it's important that performers have the tools to work together and ensure fair treatment.

"Especially with new people coming into the drag fold, there needs to be an open conversation and a benchmark, a sort of starting point to avoid these places where I see bar owners and other producers take advantage of new talent," Atauri says.

The Collective's relationship with the Globe is finished, they say, but the work is just beginning. Crotinger says the Collective has been hard at work booking shows at new venues and trying to bring the art to audiences outside the traditional drag scene.