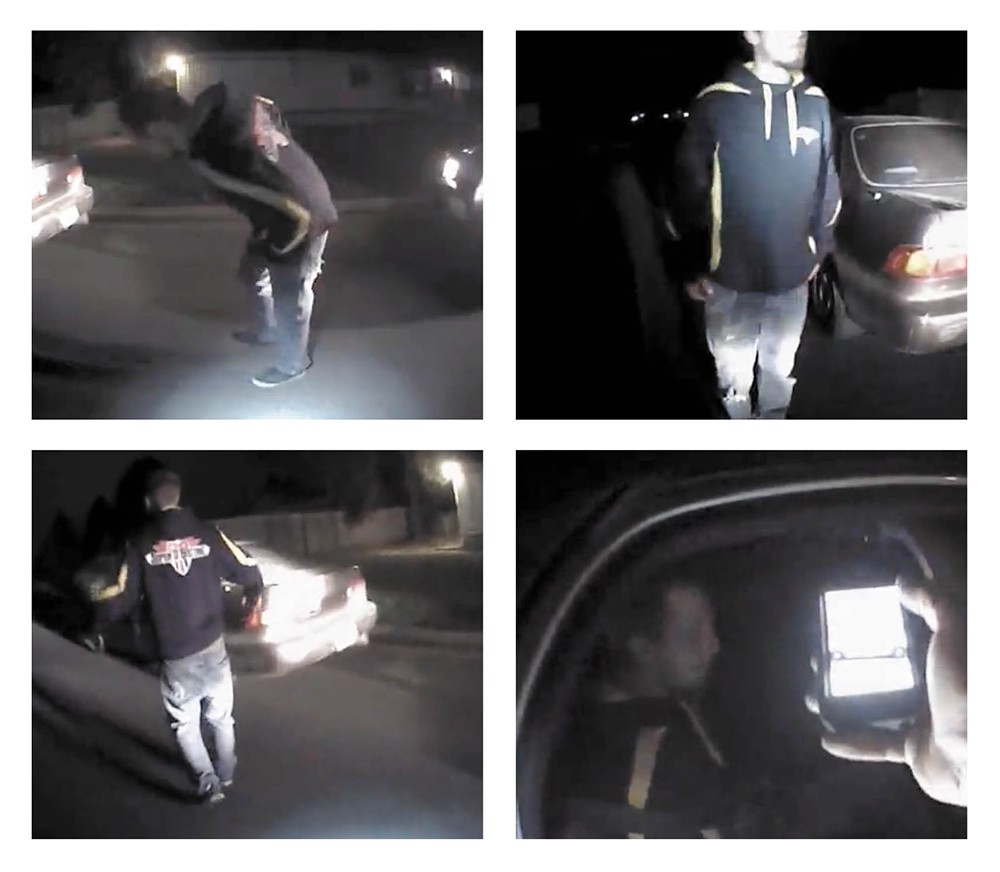 Each stumble and slur goes into the record.

As a suspected drunken driver in Liberty Lake fails a roadside sobriety test, officers wearing chest-mounted body cameras capture each mistake and incriminating statement in detail. A camera continues to roll as the man sits in a holding area with his hands cuffed behind his back, screaming for access to a bathroom.

"Don't even embarrass me like that, dog!" he shouts at officers off camera. "Let me take a f---ing piss or I'll kill your f---ing family!"

Squirming and swaying, the man struggles to stay upright as he kicks off his jeans and shoes until he's sitting in his boxers. He then apparently urinates on himself while officers wait to process him. The man begins to cry.

Stretching more than two and a half hours, the footage stands as one of dozens of police body camera videos recently released to a Seattle-area computer programmer who hopes to test both the strengths of the new technology and the weaknesses of antiquated public records practices.

The requester, who spoke on the condition he remain anonymous, issued in September a blanket request for every minute of body camera footage from almost every police agency in Washington state, causing some departments to consider closing down camera operations to avoid the overwhelming records demand. At least one agency canceled a planned pilot program.

With the state Attorney General's Office releasing a long-awaited opinion Monday clarifying that police do not need consent to record conversations with citizens, the video requester tells the Inlander that agencies face a complicated challenge to balance police transparency with individual privacy protections.

"People are watching these [videos] and understanding law enforcement in ways they never have before," he argues. "These body cameras can be seen as a curse, or they can be seen as a blessing."

launched a four-month pilot program to explore the functionality and policy challenges of body cameras. Officials say 17 SPD officers volunteered to wear the cameras during their shifts, quickly racking up hundreds of hours of footage ranging from intense to mundane. The first Spokane arrest captured by a body camera on Sept. 2 showed an assault suspect demanding to speak with his invisible attorney while officers patiently escorted him to a patrol car.

In a recent briefing, SPD Strategic Initiatives Director Tim Schwering told city councilmembers the department had received "quite a few" records requests for body cam footage. The SPD records office reports receiving just five requests so far, but it may seem like a lot when one request asks for all video footage.

"It's when you get those two or three requests for those massive amounts of data," Schwering explains. "We don't really have a lot of options."

The state Attorney General's Office confirms that the Public Records Act does not allow officials to deny a broad records request just because it may prove difficult or time-consuming. And records still must be reviewed and redacted to protect private information, which has proven difficult with video footage that captures immense audio and visual detail.

"I understand that some agencies have expressed concern that these requests can place burdens on departments," an AG spokeswoman writes. "This is something the Legislature can address."

Records officials estimated that processing all SPD video would take six employees about 18 months. The video requester notes he has worked with Spokane officials and many other agencies to make it easier to fulfill his request. For Spokane, he has agreed to let each pilot program officer select three videos to release, for a total of 51 videos.

The requester says he wishes to remain anonymous because he just wants to help police departments figure out how to handle requests more efficiently. He accepted an invitation from the Seattle Police Department last week to partner on developing software for faster redactions. He says he has already put together a computer review form for facilitating video transfers to the court system.

While his requests started as a "curiosity," he says the small effort it took to overwhelm and potentially collapse the system proves the need for improvements. He says officials should have developed a stronger strategy prior to launching the programs.

"I was just stunned that they were taken by surprise," he says, noting, "[Public records] law is so aggressive towards stuff being public."

As the video requester has posted unedited footage

to his YouTube channel at "Police Video Requests," he says he has also developed a new appreciation for law enforcement. He says many departments offered thoughtful responses along with footage providing an unparalleled window into daily police work. He singled out the Pullman Police Department for seeking to protect privacy by notifying the subjects of videos prior to release.

"I really like what they did," he says, "because this is a complex problem."

Pullman Police Cmdr. Chris Tennant admits that processing records requests can prove time-consuming, but after a year and a half of running the cameras his department has found the video crucial in many cases. A number of the city's felony cases have depended heavily on body camera footage and officers have embraced the technology.

Privacy conflicts and potentially embarrassing videos will likely continue to arise as the state Attorney General's Office reaffirmed that police officers have the right to record any conversation with a citizen. In response to a request from state Sen. Andy Billig, D-Spokane, the attorney general announced Monday that officers do not have to comply with the state's two-party consent law on audio recordings.

"A conversation between a police officer and a member of the public that occurs in the performance of the officer's official duties is not private," the opinion states, adding, "An objecting party could simply decline to continue the conversation."

Tennant, along with the video requester, SPD officials and others, hopes lawmakers will review privacy and records statutes in the coming year to address some of these emerging conflicts.

"I think the value of the footage and the good that it does ... for both sides outweighs the issues with public records requests," Tennant says. "[But] it's a really serious issue and it could be taken away. ... I don't think that's what the public wants." ♦