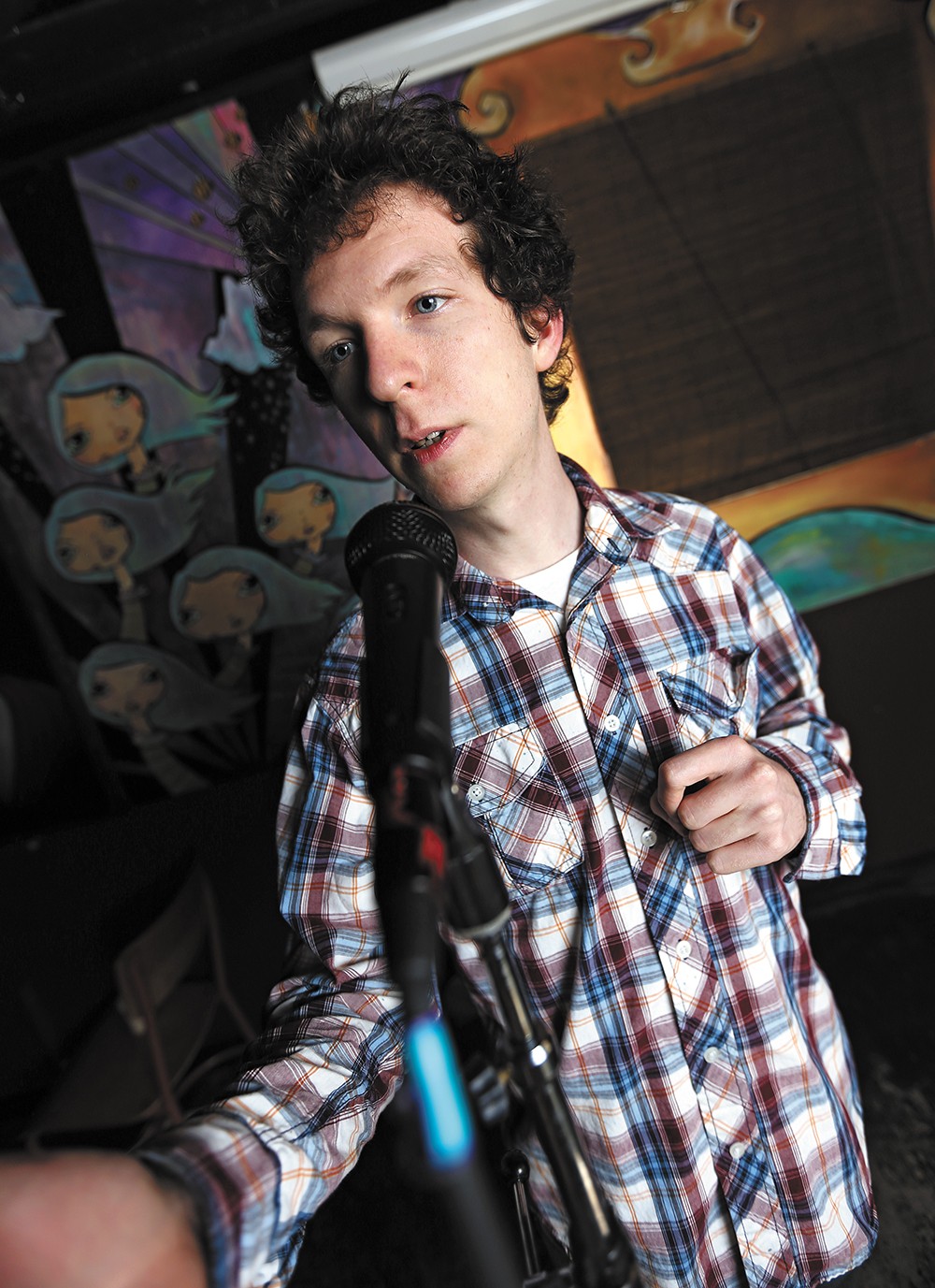 Mark Anderson holds up a glass cup to the camera. "It's not wine," he says. "It's coffee."

Anderson, best known as the Spokane poet who hosted the popular downtown Broken Mic poetry reading for the past three years, is sitting on his bed leaning against his bedroom wall — which is wallpapered in a print of towering bamboo stalks. His laptop sits on his lap, and he's talking into the camera.

"One thing that's weird about being alone in my room is that I'm speaking to people through a webcam. Like I'm pretending to speak to people... does that make sense?" he says. But no one responds... because he's alone. He holds up a puppet to the camera. "I have a guest host with me here. It's Howdy Doody." The puppet's jaw moves in silent laughter.

What Anderson is doing is something new for the poetry community in Spokane and far beyond. It's an online poetry open mic called URIRL — one hosted by Anderson from his bedroom in Spokane, but that attracts poets from Houston, Boise, Seattle and, on this particular evening, Golden, Colo.

The concept is based on a Google Hangout format: with URIRL — which stands for "you are in real life" — Anderson establishes a page where people can sign up to read live poetry over their webcam. Others just drop in to watch. Tonight, a pair of male poets from Seattle drink tall cans of Rainier as they read. A girl wrapped in a blue blanket reads her poetry into the camera, having to raise her voice at one point to be heard over her dogs, who've exploded in a frenzy of barks when her mom arrives home from work somewhere in the background. Instead of clapping between poets, observers type "CLAP CLAP" and "snaps" to show their support.

With URIRL, Anderson is not only trying to bring together scribes from around the world, he's trying to personalize the online poetry community — the people who blog or post poems on sites like Tumblr.

"There's a lot of communities and groups of people sharing poetry online, but not being face to face — always being via text," he says. "That makes it a little less real-life feeling. Even though you are online, you are in real life. This is part of real life, and thinking of it like that, and actually being face-to-face with each other, even though we're a thousand miles away, is really cool."

It also takes away some of the fear associated with standing at a microphone in front of a room full of eyes. At URIRL, there aren't any shaking hands — people are reading their work off of their computers and phones, and from journals.

"I think it can be a little less intimidating. It still feels a little more anonymous than a live reading is going to be, even though it's not anonymous," Anderson says. "Your face is on there, you're reading your poetry."

Anderson admits that Broken Mic has become a rousing success — with recent events drawing more than 30 readers. He says that part of Broken Mic's success in Spokane is that it's such a positive, welcoming community.

"I think it becomes people's way of connecting. People have said it's word church," he says. "I think what they really mean is that this is their weekly check-in with their humanity. 'What does it mean that I'm alive? I will check in with that once a week with a bunch of other people.'"

That's what Anderson hopes to replicate with URIRL: a positive, energetic community comprised of every kind of poet: slammers and academics; young, old and in between.

And with this format, there's no reason for people to have to miss out on that. You don't need a car or bus fare to be there. You don't need money or friends to sit with you while you wait for your turn. You can be in an airport and join in. You can wear your pajamas.

It's a safe space. All you need is a computer and a poem.♦