Wading into the Pandemic

1. Sometime in February I heard about the coronavirus in the same way that I would hear about some far-off event in another country. Articles circulated online and it seemed newsworthy, but not necessarily a concern of mine.

2. A week or so later, I read about the five coronavirus patients who were being flown in for treatment at Sacred Heart. They’re professionals, I thought. This is something Spokane is equipped to handle and is prepared for. My friend and I laughed at the panic-induced texts he got from his dad. 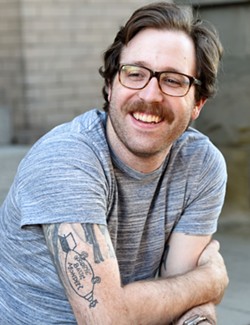 3. I got a whiff that AWP (a national convention for writers and publishers) might be canceled. This year’s host city, San Antonio, saw a small outbreak and no one knew the extent of the danger. In the end AWP was a go, but a ton of writers, publishers, and presses decided to not make the trip. I saw the photos of an empty book fair and got notifications of canceled panels. My own publisher decided to sit this one out and I learned they were going to lose 20 percent of their yearly revenue because of this decision. They weren’t the only ones. The #AWPVirtualBookFair ran its course on Twitter and we saw what was about to come without even knowing it.

I began reading about the growing rate of infections and deaths. Even though we’re on the opposite side of the state, I couldn’t help feeling the same innate fear and panic all Washingtonians felt with this news.

5. Co-workers began making the active choice to quarantine from home.

One morning, I saw the libraries were shutting down that weekend. I paced my office, yammering to anyone who’d listen about how the schools were next. They had to be. It only made sense. My prediction was they would push it to spring break and then call it for the year. Get to a good stopping point and then, well, stop.

6. Christian, a bearded friend of mine, told me he was going to have to shave. He’s had a lumberjack beard for 10-plus years.

I didn’t think it had anything to do with COVID-19. Maybe he was bored. About once a year I shave my face out of boredom. (Of course when I do, I look like a naked mole-rat. I’ve since learned to leave a mustache.)

“If you have to wear a ventilator mask. For respiratory issues with the coronavirus.”

That afternoon the schools announced Monday would be their final day until the end of April. I began pacing the office yammering on to anyone who’d listen about how the post offices were next. The only thing missing was my THE END IS NIGH sign.

Christian sent me an infographic with the appropriate facial hair for this crisis. Basically: no hair on your chin. I decided on the Zappa. Marc Maron has it and I’ve been told I look like a younger, slightly less attractive Marc Maron. I busted out my clippers and took off the beard. The mustache looked good, but… the soul patch. It looked like a juniper bush.

“Maureen? I have a quick, gut-reaction question for you.”

My wife walked to the doorway and, without stopping, simply said, “Take it off.”

So now I’m a guy with a thick, ironic-looking mustache and I’ve been too embarrassed to tell people the reason is because I’m afraid of COVID-19 — but I’m almost more afraid of revealing my naked mole rat face.

9. On Monday, I walked into the office.

“Thank you, just needed a change of pace!”

During our daily morning meeting we were told a mandatory work-from-home arrangement was starting that day. We had to pack up everything we needed and head home for the foreseeable future.

10. My parents were coming back from Belize mid-week. I started seeing reports that all flights would be grounded. I called to warn them, thinking to myself that they needed to get on a flight that night instead of waiting the two days as planned.

“Are you saying we need to get an earlier flight?” My mom asked.

When faced with this question directly, I felt like I had overreacted. The two articles I read were speculation. I imagined myself pacing the office, scratching at the back of my head while shouting about how the post offices were next.

I didn’t want to tell him I was more than a little scared.

There have been times in this last week when I snapped at him and he snapped right back. I’m ashamed that I see the fear turning into frustration moments too late.

I want to be a comforting force for him, but I don’t know what to say. The inevitable unknown renders it impossible for me to tell him everything is going to be okay.

I saw someone online sum up the feeling: “I’m either constantly overreacting or underreacting.”

There isn’t an appropriate response to all this. And knowing I’m not alone is a step toward something. This is a moment I can sit with Abe and tell him that it’s okay not to be okay.

That we’re in this together. And no matter the end, we’ll still be together. ♦

Joseph Edwin Haeger is the author of Learn to Swim. His writing has appeared in Drunk Monkeys, There’s a Zygote in My Coffee, X-R-A-Y Magazine and others. He occasionally tells people his favorite movie is Face/Off as a litmus test, but a part of him is afraid it’s true. He lives with his family in Spokane.