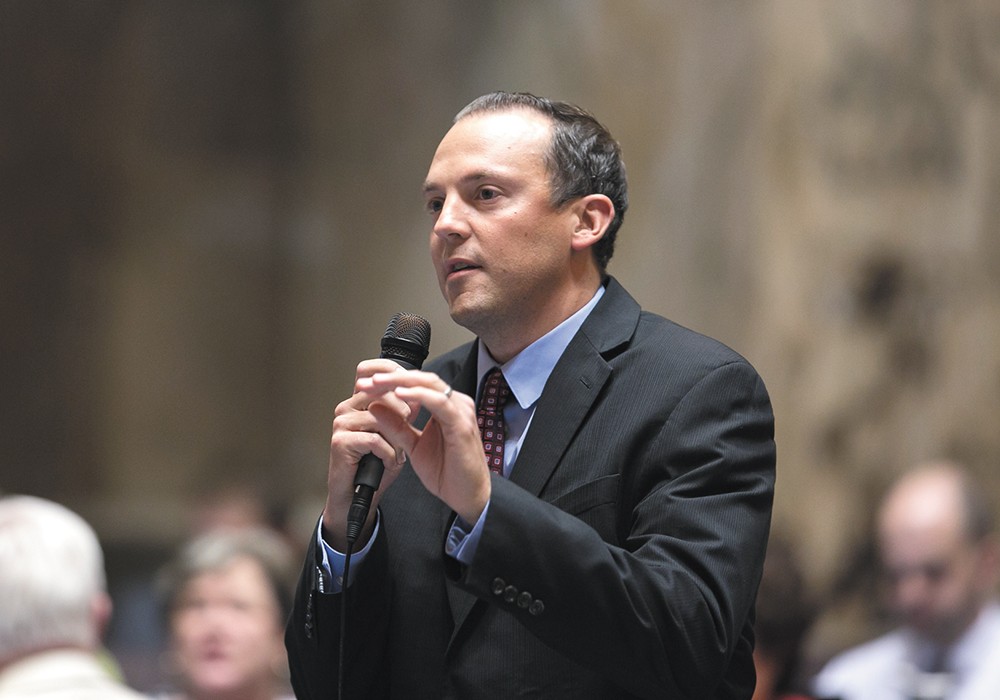 Al French thought he already defeated the idea to expand the Spokane County Commission. In 2015, a proposal to increase the size of the commission from three to five members was rejected by roughly 55 percent of voters in Spokane County. It signaled that voters sided with French in an election season that pit French, who criticized the proposal, against fellow commissioners Todd Mielke and Shelly O'Quinn, who pushed for the expansion.

Less than three years later, both Mielke and O'Quinn have since resigned to take other jobs. Instead, it was a different local politician, state Rep. Marcus Riccelli, who successfully led an effort to expand the commission.Earlier this year, Riccelli was the lead sponsor behind a bill that, by 2022, will create a five-member commission, with each member elected only by voters in their district. It was signed by Gov. Jay Inslee in March, despite opposition from all three members of the current commission: French, Josh Kerns and Mary Kuney.

"It flies in the face of the will of the voters," French says of the bill.But the fight isn't over yet. The Washington State Association of Counties (WSAC) is planning a possible legal action against the state, challenging the constitutionality of the law requiring Spokane County to elect five commissioners by district starting in 2022.

French, who is on the steering committee for the WSAC, says the potential litigation is not just about keeping the Spokane County Board of Commissioners smaller. It's about putting an end to a string of unfunded mandates for counties in Washington.

But Riccelli casts doubt on his intentions.

"This is very much driven by commissioner French, who is fundamentally opposed because he is the longest-serving commissioner, and this is a threat to his power," Riccelli says.

Riccelli, D-Spokane, isn't the only local state lawmaker to support the switch to a five-member commission. The bill earned support from Republican legislators like Rep. Matt Shea, Rep. Jeff Holy, Rep. Mike Volz and others.

They argue that the Voting Rights Act, which was signed this year and aims to give minority groups better representation in local government, could lead to a lawsuit against the county anyway. Riccelli's bill, they say, avoids that.

Spokane is currently the most populous county in the state to operate under a three-commissioner form of government. Currently, voters choose among candidates only in their district during the August primary. In the November general election, commissioners are elected countywide. Under Riccelli's bill, ballots would be limited to district voters in both the primary and general elections.

Young Kwak
Commissioner Al French wants to challenge a state law that will expand the county commission from three to five members.

French disagrees. The way he sees it, representation is reduced when citizens are only able to vote for one out of five members on the county commission.

"With this bill you will never be able to vote for those who can raise taxes, who can change policy or change direction of the county," French says.

French has been far more outspoken in his opposition than his fellow commissioners. But when Riccelli suggests the legal challenge is a "one-person initiative" led by French, French rejects the notion.

"The idea that I command so much strength politically is just absurd," French says.

Rather, county commissioners across the state see the bill as a threat to their own counties, he says. They feel it violated the process dictating how county governments are structured. If a state bill can target one county like Spokane, others feel the same can happen to them.

This isn't the only complaint the counties have when it comes to the state Legislature. Counties in Washington, for years, have been frustrated by the lack of state funding. They're planning a second lawsuit that would challenge a 2017 law that made ballot drop boxes a mandated piece of voting equipment without providing funds to counties to cover the costs of those drop boxes. In Spokane, French says, the drop boxes cost more than $50,000 in a time when the county was strapped for cash.

"The only way we can see a path forward to try and put an end to this is through litigation," French says. "We don't know how else to stop this pattern of conduct that is creating such a hardship for counties across the state."

For Riccelli, however, the very fact that counties have tight budgets is a reason not to pursue litigation. He agrees that there are "fundamental" revenue problems. But lawsuits, Riccelli says, are not the answer.

"I don't think the county association or our County Commission should be [filing] frivolous lawsuits," Riccelli says. ♦

The original print version of this article was headlined "Power Move"