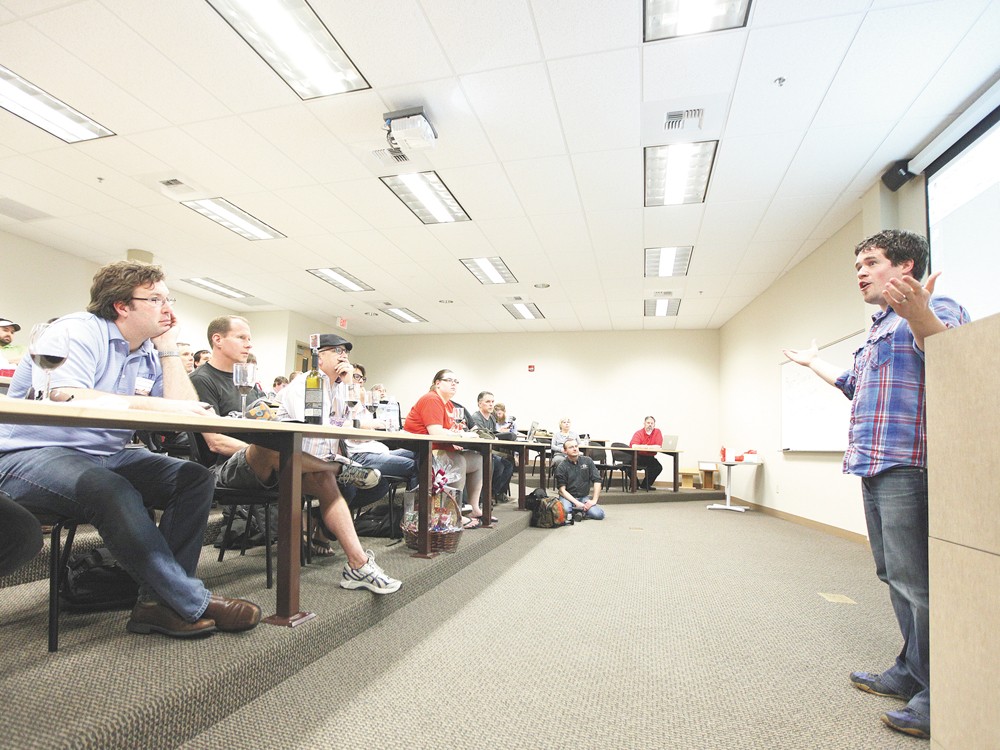 Everyone gets a minute. To summarize and pitch your world-changing idea, you get a lousy 60 seconds.

A line of 20 people winds up the left-hand aisle of the Wolff Auditorium at Gonzaga’s Jepson Center. The ages vary widely.

At the front of the line is Tom Loder, an outfitter in Wranglers and a turquoise hiking shirt who has been hunting and fishing in North Idaho for 40 years. He pitches something he calls “eco-capitalism” but runs out of time before he can really explain it. Right behind him are two young men — college kids — wearing Cosby sweaters. They pitch an idea called Barters Closet, where people can not only buy and sell used clothes but also trade them and donate them to charity. Their pitch is honed to the point that it resembles a short play and is received very well.

The ideas get more varied from there. Someone pitches a mobile and web app that lets you give homeless people money from your credit card. There’s a spice-of-the-month club that comes with online recipes, a shopping list and an instructional video. There’s an iOS game called Pixel Buddy that users will help design. There’s “a Pandora for wine” and a thoroughly analog device called the Quilt Clip, meant to keep your decorative bed spread from falling to the floor when you fold it down at night.

The energy each presenter gives off is palpable.

When Brett Noyes and Marsh Sutherland decided to bring Startup Weekend to Spokane, people told them, “Spokane is a desert,” Noyes recalls. “‘Don’t plant anything here; it won’t grow.’” Sutherland had seen it work elsewhere, though. A Spokane native, he now lives near Boston, where, he says, tech startups have exploded. “We can’t find enough engineers” for all the jobs, he says. Startup incubators and competitive, collaborative events like Startup Weekend — which has hosted nearly 500 events across the globe since 2007 — have helped fuel that explosion.

As the first night wears down, Sutherland says he begins to see a spark of that Boston energy in the auditorium at Gonzaga.

The spark is the point, says Thubten Comerford, a facilitator who has flown in from Portland. Comerford thinks he’s done about 15 of these weekends around the country. The important thing, he tells the group — more important than launching a business, he says — is “experiencing the process of launching.” Understanding how to research your market, to find revenue streams, to cultivate users and validate user experiences.

And as much as it’s a weekend to take an idea from concept to prototype, Comerford says, it’s a weekend to gather a network of people and a personal knowledge base to do the same with your next idea, and the one after that.

Over the course of two days, the teams build out their products and troubleshoot them, but they also cold-call wineries to develop customer bases, they interview Spokane’s downtown homeless population for market research.

They meet and glean advice from and network with 14 industry mentors — serial entrepreneurs, angel investors, brand consultants. They figure out the fair market value for pre-packaged spices.

As the weekend begins to wind down, and the kinetic energy of development begins to store itself in the nervous energy of the presenters about to present, Marsh Sutherland has decided there is more than just a spark here. This could be a destination for people.

“The outdoors stuff Spokane has, the drive to innovate I’ve seen here,” he says, pausing, “It’s so much like Boulder [Colorado],” a tech hub situated in a recreation mecca.

Unlike Boulder, though, and unlike Boston, Spokane has a hard time retaining its talent. If the town can start keeping people, Sutherland is convinced, things would take off. “People here are hungry,” he says.

Everyone gets five minutes. To summarize and advocate for the previous 54 hours of work, you get a lousy 300 seconds.

People are tired and harried. There’s a lot of information to fit into 300 seconds. Teams explain their user interface, their market research, their demographics, their business models. Some present full-fledged, functional web sites. Some present adorable slide shows. Uniformly, despite the hitches, the ideas get out, and uniformly, despite the fatigue, people get excited.

Eight teams make it to the presentation, and their presentations are met with raucous applause. Certain groups wow people more than others, but there’s a communal sense here that they’ve all, as a group, come through something tremendous.

“This just has such an air of grass roots,” says Dennis Magner, of Spokane ad firm Magner Sanborn, the event’s presenting sponsor. He had signed on early, but after this weekend, he says, “we’re in it as long as they are.”

The judges return and the winners are announced and the organizers prepare their closing remarks. Keep the conversation going, they say. Pick up after yourselves when you leave, they say.

By the second time Thubten Comerford begins to cry — to stop midsentence and cover his mouth, literally choked up — people believe that what has happened here is special.

And not just Spokane special. America special. What has happened here this weekend, Comerford says, fighting to compose himself, “This doesn’t happen everywhere. It just doesn’t.”

About 85 people gathered for Startup Weekend.  Four awards were given:

Best Development Work: PIXEL BUDDY
An iOS game that gives users control of the game by letting them vote on the way the developers create it. facebook.com/PixelBuddy

Best User Experience or Design: BARTERS CLOSET
A second-hand clothing site that allows people to not just buy and sell used clothes but also trade them and donate them to charity. barterscloset.com • @bartersclos

Best Social Responsibility: GIVE WISE
A mobile and web app that allows people to give money and services to the homeless via credit and debit cards. givewise.co • @givwise

Best Overall: SPICEOLOGIST
A web app and spice-of-the-month club that gives you a recipe, a shopping list, an instructional video and then mails you a packet of the exact spices you need to make the dish. spiceologist.com • @Spiceologist