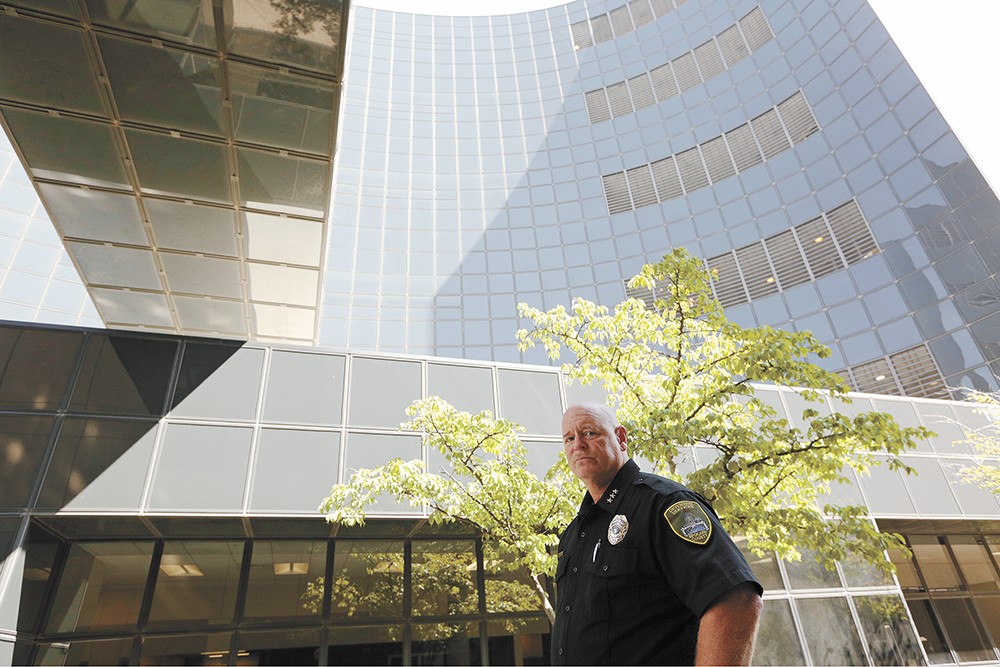 The two-person team receives an estimated 150 pieces of mail daily and all of it needs to be tediously examined piece by piece.

"Having to deconstruct an envelope trying to look for drugs can be really time consuming — especially when you have the heavier volume days when you're looking at 200-plus pieces of mail," one of the mail desk employees, who declined to give their name, tells the Inlander. "We have to go through each piece individually."

They don't find contraband every day. But when they do, it's often small strips of Suboxone, a medication designed to treat people suffering from opioid addiction. It's known to reduce cravings, ease painful withdrawal symptoms — including vomiting and diarrhea that can last for days — and prevent fatal overdoses. Notably, the medication shows up at the mail desk more often than drugs like heroin or methamphetamine.

"What we've primarily come across is strips of Suboxone," the employee says. "Suboxone is the most prevalent drug that's sent in through the mail."

He adds that, over the last two years or so, the mail desk has "really seen an uptick in the Suboxone trying to be sent in," and that, typically, Suboxone is found in quantities of five to eight strips. The medication has also been discovered in inmate mail over 40 times since October 2018, according to Donna Sawtelle, office manager at Spokane County Detention Services. By comparison, identifiable methamphetamine was only discovered in the mail once by county staff.

The phenomenon isn't unique to Spokane County as the nation continues to grapple with the opioid crisis: Staff at jails from Kootenai County, Idaho, to Whatcom County, Washington, report regularly confiscating smuggled Suboxone. Nationally, the medication is turning up in jails and prisons across the country as well as in street-level dealing for addicts outside of jails, per recent news reports. It's also indicative, some medical experts say, of the prevalence of opioid addiction in jail populations and the limited treatment services available to inmates who want to avoid going through withdrawals.

"It tells me that people are suffering in jail," says Matt Layton, a clinical education director at Washington State University's Elson S. Floyd College of Medicine, referring to the reports of Suboxone smuggling. Previously, he ran the Spokane Regional Health District's Opioid Treatment Program, which prescribes drugs similar to Suboxone to inmates in the county jail. He adds, "They're ending up in jail, they're in withdrawal, and they're suffering."

Here's how the Suboxone gets in: The strips, which are only a little larger than a person's fingernail and are paper-thin, are typically hidden along the seams on envelopes.

"They'll fit as many in there as they can," the mail desk employee says. "It's really easy to hide in envelopes."

In another case, county staff discovered Suboxone inserted into the middle of a magazine, according to Sawtelle. Don Hooper, a lieutenant at the Spokane County Jail, says his staff have discovered Suboxone in legal correspondence, a category of mail that correctional guards personally search for contraband in front of inmates in the jail.

Hooper adds that, in other cases, drugs, including Suboxone, are also getting into the jail through people hiding them in a bodily orifice. While drugs like meth and heroin are frequently discovered in the pockets of people through pat-downs during booking, strip searches are rare and invasive body-cavity searches — which require a warrant, per state law — are practically nonexistent, Hooper says.

"They'll bring drugs in, hand those drugs out, however the exchange of money happens: through commissary, through money on books, or it happens all on the outside," he says. "A strip search will not find a Suboxone strip if you're willing to insert it into your body."

Layton with Washington State University says that the high demand for Suboxone inside the jail likely stems from addicted inmates who are desperate to stave off painful withdrawals: "They will do pretty much anything to get out of withdrawals."

Wendy Jones, chief of corrections at the Whatcom County Jail, tells the Inlander that, prior to the county establishing a medication-assisted treatment (MAT) program in their facility and buying a body scanner to detect drugs during booking, Suboxone was frequently smuggled into the facility — specifically for the purpose of staving off withdrawals.

"For somebody who is going through a tough withdrawal or going through any type of recovery, that's currency in a jail," she says. "It was both for their own use and to get a little extra money while they were in custody."

Jones adds that Whatcom County Jail staff found more contraband "Suboxone than we did heroin" before the county established its MAT program after the ACLU filed a lawsuit in 2018.

Suboxone, which is a combination of buprenorphine, an opioid substitute, and naloxone, an opioid antagonist, operates as a relatively safe and effective medication to stabilize patients and get them out of the cycle of addiction. For chronically addicted opioid users, buprenorphine in Suboxone activates opioid receptors in the brain and produces weaker euphoric effects than a full-fledged opioid like heroin. And to prevent misuse, the medication's naloxone component activates if Suboxone is dissolved or crushed, blocking opioid receptors and rendering the buprenorphine ineffective if injected.

"You take it once a day and then you don't spend the rest of the day trying to get a fix or get high," Layton says. "When you have a stable level of this medication, you're not high and you're not in withdrawal."

Like other prescription drugs that end up on the black market, Suboxone gets sold on the side by patients with valid prescriptions.

In some cases, traditional drug dealers stock Suboxone alongside other substances, like heroin or meth: "We've had a few long-term narcotics investigations in which we've executed a search warrant and we've come across Suboxone that a dealer had in his inventory," says Spokane Police Department Capt. Brad Arleth. "That wasn't necessarily what we were looking for."

While the drugs can be abused — non-addicted persons can get high from taking Suboxone — Layton argues that the volume of Suboxone flowing towards the Spokane County Jail is likely reflective of limited treatment services for addicts and their fear of withdrawals. He cites the fact that inmates at the Spokane County Jail seeking opioid addiction treatment weren't referred to the Spokane Regional Health District's MAT program for roughly eight months over the past year due to correctional guard staffing constraints. During that period, inmates seeking treatment went as far as writing letters to the Health District. County correctional staff have since allowed new admissions to the program.

"People can't get treatment," Layton says. "That's not OK. That's a problem that needs a solution."

Notably, during some of the months that new referrals to the Health District's treatment program weren't permitted, hundreds of inmates were placed on opioid withdrawal monitoring procedures, according to data provided by NaphCare, the private company that provides medical services in the county's detention facilities.

Mike Sparber, director of Spokane County Detention Services, says that the presence of Suboxone in the general flow of illicit drugs into the jail isn't indicative of treatment limitations: "To say that it is somehow connected would be a pretty good stretch."

He argues that inmates again have the option of getting medication through the Health District — now that the county is allowing new admissions again — or through monitored withdrawal under the supervision of NaphCare medical staff, who provide small doses of buprenorphine and sports drinks to ease the process. Inmates that don't choose those routes and still seek out Suboxone are likely abusing it or trying to profit off it, he argues.

"The Suboxone that is being smuggled in is being used for their own personal use or they are trading it off and selling it," Sparber says. "For the people who are truly serious about getting help and wanting to keep up with their Suboxone, there's medical [staff] or the Regional Health District."

But for people suffering from severe opioid addiction, illicit and sanctioned medication is all the same, Layton says: "Addiction blurs those lines. It's whatever it takes to get well." ♦

The original print version of this article was headlined "Bootleg Medicine"