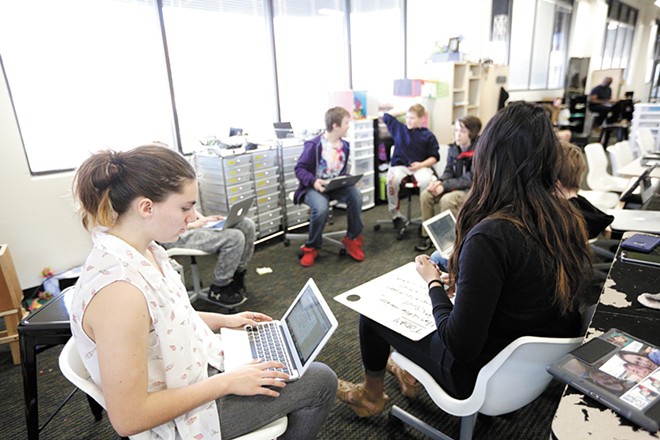 In his freshman year at Rogers High School, Isaiah Thompson realized he needed a change.

It wasn't that he struggled in school. He regularly got A's and B's. But he craved a different kind of learning, something more hands-on. He didn't think he could find that in a traditional public school.

"I wasn't challenged at all," Thompson, 15, tells the Inlander.

After hearing his friends rave about Innovation High School, a Spokane charter school connected to PRIDE Prep Middle School, he asked his mom, Crystal Benvenuti, if he could try to get in. After spending months on the waitlist, Thompson recently found out he'll be attending Innovation in the fall.

Benvenuti says Innovation, which favors project-based and hands-on learning, is exactly what her son needs.

"This is so something he needs to be in, to be a part of this school," says Benvenuti.

Increasingly, families across the area are starting to agree. Between Spokane's two charter school systems — Spokane International Academy and PRIDE schools — the waitlist for students trying to get in stands at about 900. Nearly 600 are on the waiting list to get into Spokane International Academy, a kindergarten through eighth grade school. About 300 more are waiting to get into Innovation High School or PRIDE Prep Middle School. They're among the highest charter school waitlists in the state.

While the charter schools don't have an elected school board, Spokane Public Schools is the only district in the state to authorize its two charter schools. Soon, the district will release a report on the performance of the schools, says Jeannette Vaughn, director of the department of innovation for the district.

Without going into specifics, she says there won't be any bad news.

"The reports are great," Vaughn says. "They're doing well."

Charter schools have been criticized in places across the nation for, in some cases, poor performance and for enabling school segregation by limiting enrollment. Teachers unions oppose them, arguing they take money from public schools but aren't subject to the same level of public accountability without an elected school board.

But setting aside the debate over their legality, with three years under their belt, it's clear that the charter schools in Spokane give results that are at least comparable with traditional public schools. At best, they've been more effective for certain populations.

At Spokane International Academy, scores for the 2016-17 statewide Smarter Balanced assessment were higher than district averages for sixth and seventh graders, according to the state Office of the Superintendent for Public Instruction. Out of over 250 students, Spokane International had similar racial demographics as Spokane Public Schools. Roughly 42 percent were on free or reduced lunch, about 10 percent less than the district.

At PRIDE Prep, scores in math and English language arts were slightly lower than the district's Smarter Balanced scores in 2016-17. But scores in the statewide science test were better by 10 percent. And the school has been particularly effective for students receiving special education services, with scores for those students at PRIDE Prep easily outpacing special needs students in the district and state.

Students who took the PSAT this past school year as ninth-graders at Innovation High School, meanwhile, had higher marks than freshmen in the rest of the state, according to numbers provided by the school.

For McDonald, however, there's more to measuring success than test scores. She knows they're doing something right because once kids start at PRIDE Prep or Innovation, they stay there. When opening the high school, for example, only three students from the eighth-grade class decided not to go on to Innovation.

"That, to me, is a good indicator of satisfaction and that kids are doing well," McDonald says.

Bree Oakley, a parent of kids attending PRIDE schools, says she's seeing "amazing things come from my kids that we didn't think was possible." The way of teaching, with fewer curriculum requirements, has resonated with her children.

Her oldest, J.D. Oakley, particularly enjoys the projects that have to do with woodworking. And he likes that the projects allow him to be in control of his own learning.

"I'm not just sitting in a classroom all day, looking at a board and memorizing things," Oakley says. "I'm improving my own education."

For Katy Henry, president of the Spokane Education Association, the fact that there's such a long waitlist to get into the charter schools means they can't truly be public.

Henry says the union "supports public education," but she doesn't count charter schools as part of that. She says the union doesn't think public money should be going to schools that put students on a lottery-based waitlist.

At PRIDE Prep, for example, a lottery would be held for the incoming sixth-grade class. If a student is not chosen in the lottery, they're put on the waitlist, given a number, and then they wait for their number to come up. The wait can be as short as a few months or as long as two years.

"We think money should be going to support all students," Henry says. "Spokane Public Schools has great schools."

To her point, PRIDE Prep and Innovation offer a style of learning that involves students demonstrating their knowledge through some kind of project, but Spokane's Community School is project-based, too. And while Spokane International Academy offers language immersion, so does a recent program launched by Spokane Public Schools for kindergartners. That program will eventually expand to to all elementary schools.

"I'm excited about the things Spokane Public Schools offers and the resources they provide," Henry says.

For Travis Franklin, founder of Spokane International Academy, the fact that there's still such a large waitlist to get into the charter schools says something. It's not that the traditional public school system is lacking, necessarily. But families are craving unique options, he says.

"I think it speaks to the fact that families in Spokane just want more choice in the ways they're educated," Franklin says. "Once people see what that choice can do, it's pretty appealing." ♦