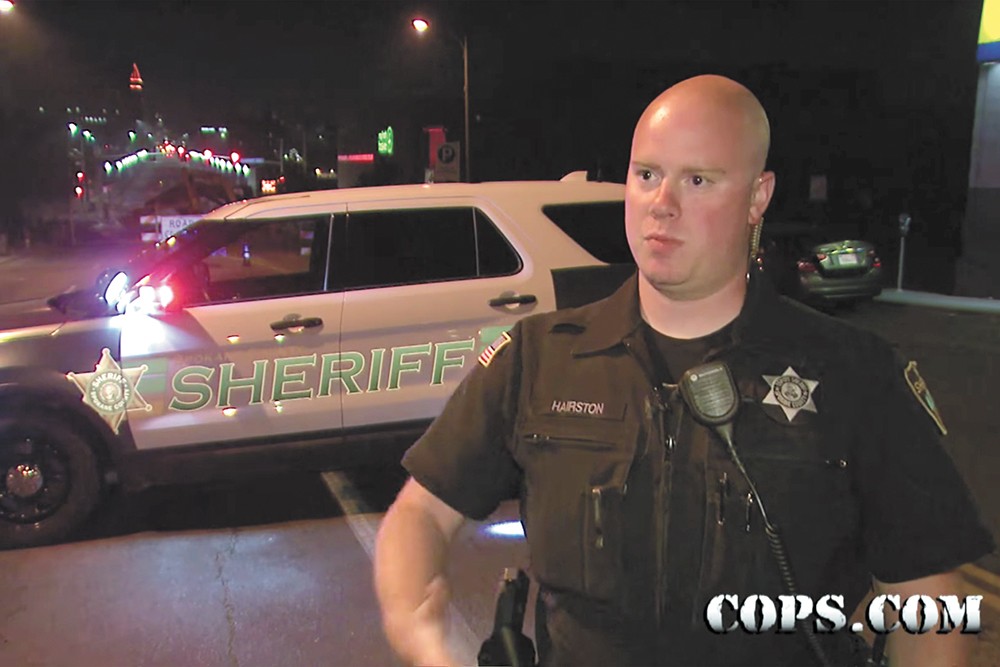 COPS, a reality television show where camera crews embed with police officers to film high-speed chases and arrests, seems as mundanely American as apple pie; it's been on the air for 30 years, after all. So the fact that local law enforcement agencies — such as the Spokane County Sheriff's Office — have collaborated with such shows over the years hasn't raised any eyebrows.

Spokane County Sheriff Ozzie Knezovich is a proponent of the show. When interviewed by Running From COPS, a new investigative podcast examining police ridealong reality television shows like COPS and Live PD, he said that his agency's prior collaboration with Live PD did "wonders" for their recruiting.

"Applications. People calling us. All over the country," he told the podcast. "It's been amazing."

But both television shows have come under fire in recent years. Running From COPS, which aired last spring, raised a host of questions about problematic aspects of the shows' operations. For instance: In order to gain access, COPS lets law enforcement agencies view and edit episodes. The podcast also found that numerous suspects were featured on episodes without signing consent forms — or were coerced by police officers and COPS crews alike into doing so.

Even before the podcast aired, police-based reality TV was in local leaders' crosshairs. Last spring, the Spokane City Council passed an ordinance regulating shows like Live PD by requiring the show to obtain business licenses, signed consent forms from suspects, liability insurance, and allow the city to review footage.

"It's pretty clear that they don't ask everyone for consent," says City Council President Ben Stuckart, who pushed the ordinance last year. "These shows, they're presuming people guilty before they're innocent and it preys on people on their worst days."

Despite the recent backlash and scrutiny of the shows, the Spokane County Sheriff's Office continues to work with COPS. Crews with the show have reportedly been embedding with deputies since July, according to August news reports. And Sheriff Knezovich defends the collaboration, framing it as a win for transparency and an effective recruiting tool.

"We've been doing COPS for 20 years," Knezovich tells the Inlander. "It's transparency. I thought that everyone is for that."

"What it shows is exactly what the men and women of law enforcement deal with out on the street," he adds.

After analyzing hundreds of episodes of COPS, the team behind Running From COPS found that the show presented aggressive policing as positive, stacked the beginning of episodes with arrests of racial minorities accused of committing violent crimes — arguably contributing to racial stereotypes — and overrepresented low-level drug arrests in the show when compared with national statistics. The show also routinely presents excessive force and aggressive tactics as "good policing" and "glorifies the drug war," Dan Taberski, the creator of Running From COPS, argues in a New York Times opinion piece published last June.

"What we found is that COPS is edited far more problematically than it lets on, that it consistently presents excessive force as good policing and that its structural reinforcement of racial stereotypes about criminality raises questions about the ethics of continuing to let the show remain on the air," Taberski writes.

When reached for comment, Knezovich confirmed that his office reviews footage produced by COPS film crews. However, he says that he doesn't recall ever stepping in to make edits to any episodes. As for whether the film crews obtain written consent from suspects before putting their likeness on air, he says: "I believe that that's the standard route that we go."

However, he also says that he doesn't "pay attention" to the intricacies of shows' operations with his agency and didn't provide details about the most recent collaboration with COPS: "We've been doing it so long that it's automatic," he says. "They contact us and say 'we'd like to come in' and we have them in."

Taberski laid into the agency for its continued collaboration with the show.

"I think it's a shame that they're still working with COPS," he tells the Inlander. He adds that "it's no surprise" that Sheriff Knezovich likes the show because it paints his department in a positive light.

"It's a dream scenario for anyone trying to control their public image," he adds. "But is that what we want from public servants? I would guess no."

The Spokane County Sheriff's Office doesn't equip its deputies with body cameras or place dashcams in their vehicles, meaning that footage produced by COPS crews is often the only video documentation of arrests. But Taberski says its wrong to equate COPS, a ratings-driven television show that law enforcement can edit, with body camera footage.

"It has nothing to do with accountability at all," he says. "Zero."

Knezovich described the notion that COPS and Live PD effectively serve as propaganda arms for his agency as "the stupidest argument that I've ever heard."

"There's this thing called lawsuits," he says. "There's no hiding what goes on out on the streets."

The shows, Meidl says, leave out the time that officers spend "writing reports, interviewing victims of crimes and taking evidence to the property facility and then writing more reports."

When the Spokane City Council passed its ordinance regulating shows like Live PD last year, Knezovich criticized the decision, calling it "censorship." ("It's real. Nobody's making that stuff up," he told the Inlander last year.) Knezovich maintains the position now, calling it a "stupid" and "politically motivated" reaction from Stuckart.

Notably, he says that his office "can't give a guarantee" that deputies with embedded COPS camera crews won't respond to incidents inside Spokane city limits — despite the ordinance the City Council passed last year: "If something happens where we cross over into city limits, that may happen."

Stuckart says that crews working with the Sheriff's Office that end up filming within city limits would be "violating the law."

"I think everybody should follow the law," he says.

Despite being featured on Running From COPS, Knezovich says that he hasn't listened to the podcast. Broadly, he sees the whole thing as a nonissue: "The only people making problems about this would be Ben Stuckart and the media." ♦

NO BODY CAMERAS, ONLY TV CREWS

Critics of reality police TV shows argue that they don't actually make policing more transparent due to law enforcement agencies' ability to edit footage and the overall glorification of aggressive policing. But a COPS camera crew actually helped exculpate a young man who was arrested by Spokane County Sheriff's Deputies in August 2017.

Austen Sullivan, then 22, was heading home on his bicycle. As he was cycling along Barker Road just north of the Spokane River, his back tire was clipped by the vehicle of a pursuing Spokane County Sheriff's deputy, per a Spokesman-Review report. He crashed and hit his head on the pavement, knocking him unconscious. When he awoke, a COPS camera crew was filming him, while a deputy tried to convince him that Sullivan was the one who hit his car. He was later booked into the Spokane County Jail for failing to obey an officer and obstructing an officer, eventually pleading guilty. (Sullivan was also saddled with over $10,000 in medical bills stemming from the incident.)

Sullivan eventually hired attorney Patrick Fannin, who obtained the COPS footage of his arrest, and negotiated with Spokane County for a $25,000 settlement in May 2019. One of the involved deputies was also the subject of an internal investigation for allegedly lying in reports, to supervisors, and using excessive force, according to the Spokesman-Review. It was an instance of COPS, a television show, aiding in the pursuit of police accountability and transparency.

However, Fannin argues that the presence of the COPS camera crew with the deputies who ran into Sullivan and apprehended him likely contributed to the escalation, due to pressure on the deputy to deliver an exciting and action-packed arrest for the cameras.

"Reality cop shows, they stimulate officers that are filmed to want to do something or be involved in something that is rating-friendly," he tells the Inlander. "I do believe that the reality television cameras led to this incident."

The original print version of this article was headlined "Skewed Depiction?"