You've Got a Telegram

Nancy Erchul has a one-of-a-kind message for you 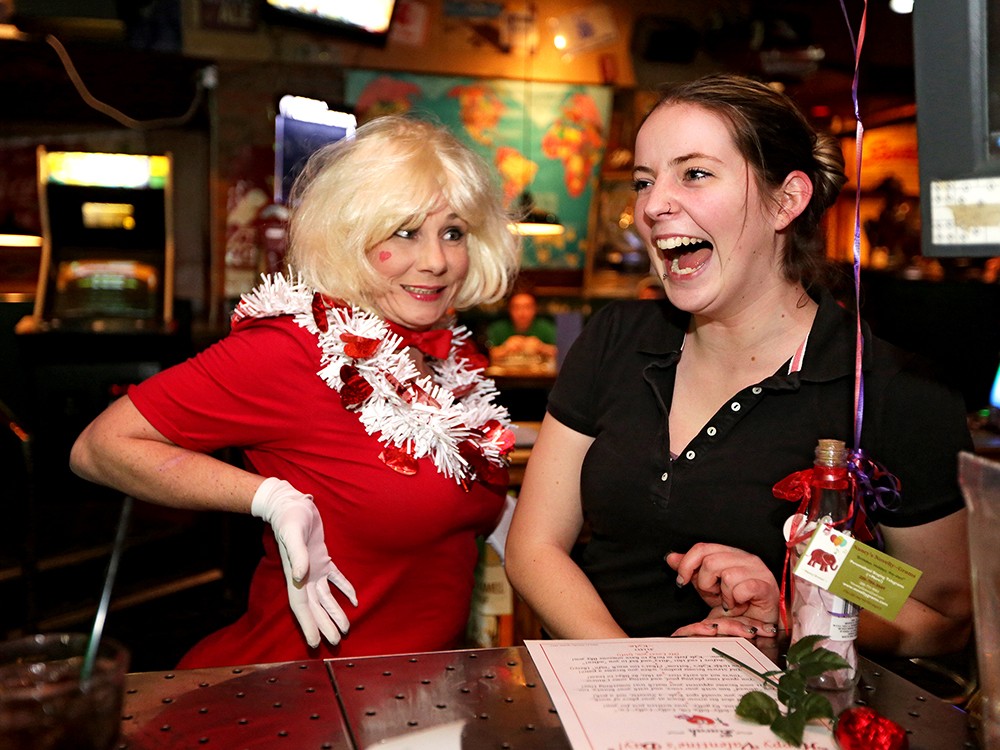 On a normal Friday evening, Nancy Erchul would be outside her front door working in her garden, quiet and alone. Tonight, she’s pulling a tight red dress over a padded suit that mushrooms the size of her butt and chest by at least three times.

She pairs the getup with short black heels, cherry red lipstick and a blonde wig and slips in a back door at Cricket’s in downtown Coeur d’Alene. Her customer is waiting. A young server named Kyle leads her around a corner and points out his girlfriend Sarah, who’s busy plugging orders into a computer. Erchul saunters over and sidles up to her. She pulls a piece of cardstock from her purse and belts out a song about the couple. She’s swinging her hips back and forth, feeding off the laughter of the employees and customers, all of whom are staring.

“You spend time playing pool, and eating some Chinese,” she sings, bouncing up and down. “You’re not an early riser. At this, he likes to tease.”

Erchul delivered her first singing telegrams as part of a high school fundraiser and later as gifts for friends. Over the past year or so, she’s turned it into a business — Nancy’s Novelty Grams — with requests piling up around Valentine’s Day. She’s boisterous and laughs at her own jokes, but considers herself quiet, even shy in some ways. Her partner, Jeff, is a “man of few words,” she says, and aside from this work, she doesn’t do much to express the theater she remembers from her stints with “hair bands” in the ‘80s.

“When I’m in costume, I’m free to just do whatever,” she says. “I’ve got a blonde wig on and a padded suit. Nobody even knows what I look like.”

She’s learned lessons along the way: Ask if someone’s ordering the scary clown character as a joke on someone who has a legitimate fear of clowns. (If so, refuse.) On Valentine’s Day, have someone drive you between deliveries so you can change costumes in the car. Don’t do funerals.

Erchul writes an original song for every telegram she delivers and calls herself a “perfectionist.” She’s hoping to take her listeners on a journey, she says.

“The perfect telegram is: You make them laugh, then they touch their heart, and I usually try to leave with a laugh,” she says.

She’s delivered to doctors and teachers while they work, to corporate events and bachelor parties. Her list of characters runs longer than 40, and she says she’s willing to piece together just about anything people want. Some are obvious (Marilyn Monroe, a clown, a giant heart), but she calls others the “they-won’t-even-see-you-coming ones,” like “Grandma” and “Homeless Hannah.” (“I’m not politically correct,” she says proudly).

She finds inspiration in the details the person ordering the surprise is willing to give. She asks about favorites, pet peeves and memories.

“People really care and then they just open up their lives, and I almost feel like I know the people when I actually show up,” she says. “I’m such a romantic at heart. I almost live vicariously through other people.”