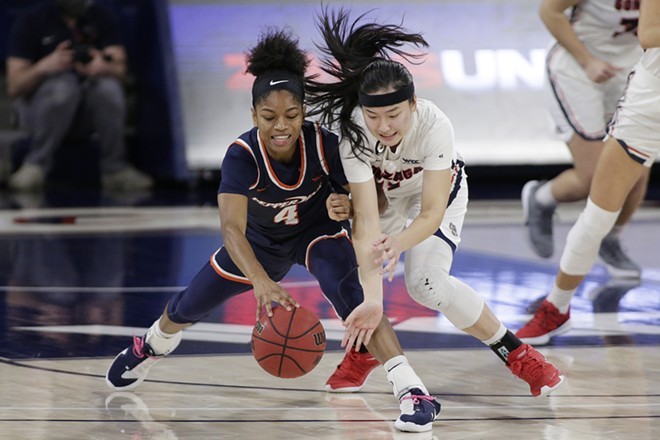 Gonzaga's West Coast Conference season was supposed to start last week, but the COVID omicron variant had other ideas. Positive test results within San Diego's program resulted in the scrapping of Thursday's game, and then positive tests within Gonzaga's program took down Saturday's trip to Loyola Marymount.

There were seven games scheduled on the men’s side for the opening weekend of WCC play. None happened. It wasn’t just the men, either. The league shelved every single women's game on the schedule as well. The opening week of conference play has come and gone, yet every team still sits at 0-0.

This is not ideal, but is it time to hit the panic button? Not yet.

First of all, the conference has experience with this. Last season happened, though not without a handful of hitches, but it happened nonetheless. The conference adapted on the fly. Last season, Gonzaga was supposed to play Santa Clara on Jan. 7, but that game was called off due to positive tests within the Broncos’ program. Brigham Young was supposed to play Pacific that same day but was unable because of positives within the Tigers’ program.

On Jan. 4, Gonzaga, BYU and the West Coast Conference agreed to have the Zags and Cougars face off on Jan. 7 instead. They scheduled a game with three days' notice, and it was just fine — especially for Gonzaga, which won 86-69.

Not only did last season show that adaptations and changes could be made rapidly and without issue, but it also laid a foundation for how to manage a season that gets out of control. The league implemented an adjusted standings format that took into account the strength of schedule, not just wins and losses, because some teams were unable to play as many games as others. Should things go seriously off the rails like they did last season, there’s a plug-and-play template ready to go to help right the ship.

There’s also some recent news that brings cause for optimism.

Last week, the Centers for Disease Control and Prevention shortened the isolation period for fully vaccinated individuals who test positive to just five days. Last year, that period was 10  days instead of five. The NCAA, West Coast Conference and Gonzaga have all been following the CDC’s guidelines, and while none of those three have publicly announced changes to their protocols in the wake of the CDC’s updated guidance, it appears they are following the new rules even if they haven’t come out and said it. All of this week’s games on the men’s side are set to tip off Thursday and Saturday as scheduled, with no announcements so far stating otherwise. Those games could not be played if the league and its teams were still following the previous guidance.

Another reason to hold off on the concern, for now, is the league schedule is laid out in a way that takes a lot of the headache out of trying to reschedule games. With games scheduled only for Thursdays and Saturdays, there is plenty of wiggle room throughout the rest of the week to make up games that have been postponed. Last season, each of the league’s 10 teams played at least once on a Monday, Tuesday or Wednesday. For other leagues that may as well schedule by blindly throwing darts at a calendar, the process of making up games can be tricky. In the WCC, every team has the same window of open days every week of the season.

The Zags are scheduled to host San Francisco on Thursday, Jan. 6. The Dons have been red hot so far this season and own a league-best 13-1 record. Their originally scheduled conference opener at Saint Mary’s was postponed due to positive tests within the Saint Mary’s program. Which is to say, keep your fingers crossed that San Francisco can stay healthy in the coming days. After that, the Zags are scheduled to host Pepperdine on Saturday. Both games are set for 6 p.m. and air locally on KHQ and regionally on ROOT Sports Plus.