Zags veterans are locked and loaded. But how do the newer faces stack up? 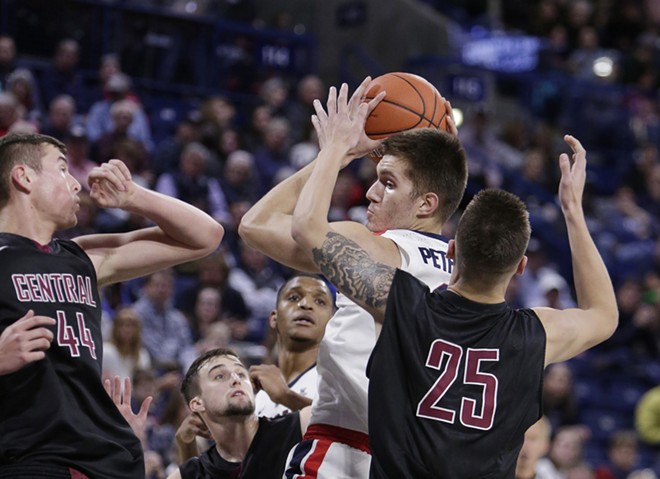 Young Kwak
Gonzaga forward Filip Petrusev, center, grabs a rebound against Central Washington in a game last year.
It’s as if nothing has changed for the Gonzaga Bulldogs, who opened the season with back-to-back blowout victories.

But really, a lot has changed. The only returning starter from last season is junior forward Corey Kispert. Beyond that, the only player to see the floor thus far who casual fans should remember is sophomore forward Filip Petrusev. Last season both were role players for Mark Few’s team. This year they’ve been asked to be leaders of a team that is loaded with new or inexperienced players.

There were questions about how it would all come together. The early returns are positive.

Kispert led the way in game one, a 95-64 win over Alabama State, with a career high 28 points. Petrusev took control in the second game, a 110-60 dismantling of Arkansas Pine Bluff, scoring a career high 25 points while missing just one shot from the field.

So, the veterans look comfortable in their new roles. What about all the other guys?

Let’s start with redshirt sophomore guard Joel Ayayi. He’s not technically a new face, having spent the past two seasons on the team, but Zag fans never really got to see him play meaningful minutes until this season. Last year as a freshman, Ayayi played in just 23 of the team’s 37 games. He totaled 39 points and 12 assists for the season.

This year, as the first guard coming off the bench, Ayayi has seen a massive uptick in playing time. He’s averaged 24 minutes over the first two games and has already matched last season’s total with 12 assists. He’s also the team’s leading rebounder averaging 10 per game. On Saturday he grabbed 13 rebounds, more than any Gonzaga player listed as a guard since Mike Hart pulled down 14 against Wichita State back in 2013.

Ayayi’s backcourt mates, graduate transfers Admon Gilder and Ryan Woolridge, haven’t needed much time to adjust either. Gilder, who normally slots in at shooting guard, has shown his athleticism in transition and ranks third on the team in scoring (13.5 points per game). At point guard, Woolridge has proven to be an adept and willing passer with 15 assists to just three turnovers. He’s also lightning fast in transition, allowing the Zags to hunt for shots before the opposing defense can get set. 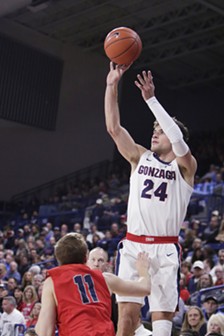 Young Kwak
Gonzaga forward Corey Kispert (24) shoots over Lewis-Clark State guard Hodges Bailey.
Then there are the freshmen, and there are a lot of them.

Spokane’s own Anton Watson, who won two state titles at Gonzaga Prep, has been starting at power forward. He’s averaging just under 10 points per game, but it’s been on the defensive end that he’s stood out the most. Watson’s athleticism and length have proven to be a nightmare for opposing offenses. Watson already has five steals on the season, some of which have led to monster dunks a second or two later.

Texan Drew Timme has been the first big man coming off the bench in Mark Few’s tight, seven-man rotation. Timme has been the team’s most dominant player in the paint thus far. He’s averaging 13 points per game, all of which have come inside the three-point arc.

Even the guys outside of the rotation, like Lithuanian Martynas Arlauskas and Russian Pavel Zakharov, have had moments to shine. Arlauskas, a 6-foot-6 wing, came up with a steal which he threw down for a dunk on Saturday. And Zakharov, a 6-foot-11 forward, showed his versatility by scoring both at the basket and from three point range.

There’s no such thing as a rebuilding year around here. Once again, the Zags have simply reloaded. Amazingly, they’re not even done reloading just yet.

Senior forward Killian Tillie, who appears on multiple preseason player of the year award watch lists, has yet to log a single minute. Tillie underwent surgery to — as he and the coaching staff have said — clean up his knee on Oct. 3. In the season opener Tillie was a limited participant in pregame warmups. On Saturday he was a full participant and looked as good as ever. But, as we’ve seen through two games, there’s no need to rush his return to the court.