I’d like to share a story about a cat I’ve come to know pretty well over the last year, with the hopes that by telling it, she will find the home she so deserves.

Princess is an almost 10-year-old, domestic longhaired cat and was surrendered to the Spokane Humane Society on Oct. 13, 2011 after living with her former owner for 8 1/2 years. That’s right—it’s been just short of a year that she’s been waiting at the shelter to find a home. But, because SHS does not euthanize animals due to time or space constraints, Princess will stay there until she finds that home. It’s long been my hope—and the shelter staff’s and volunteers’ hope—that Princess won’t be in her usual kennel in the cat room when that one-year anniversary rolls around next Saturday. 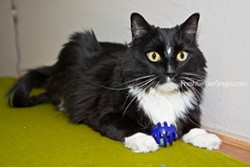 Why has Princess been at the shelter for so long?
Spokane Humane Society’s volunteer and foster coordinator Jenna Carroll says it’s not often that animals are in the shelter’s care for an entire year, but it does happen.
“We don’t like to see it happen, but it is one of the benefits of our system” that the animals can remain there as long as it takes to find them a home, she says.
She says that of all the cats currently in the shelter, Princess has been there the longest, but in the past there have been others who’ve stayed longer.
click to enlarge

Princess’s former owner filled out on the shelter’s animal intake form that he or she was giving up the black and white cat because of house soiling. This is one of the top reasons cats are surrendered to animal shelters, even though in most cases it’s usually a pretty easy problem to solve by taking your cat to a vet.

After being examined by the shelter’s veterinarian, Princess was diagnosed with a urinary tract infection and was put on antibiotics to clear it up. (When a cat has a UTI, it won’t use the litter box in many cases because it associates the pain it feels with going inside the box.)

Princess has definitely had her ups and downs during her stay. She’s an older cat, so she’s often overlooked by people for that reason, as are the majority of “senior” dogs and cats. For a long time, she also wasn’t very active and would just sit in her kennel and stare out with her bright gold eyes at the people coming to look at the cats. They’d pass by her cage without so much as a glance.

I’m no vet or animal behavior expert, but I’ve got a pretty good feeling that she became depressed, and because of that she stopped showing interest in much—playing, grooming and even moving around much.

Shaving a cat is no easy feat—but with the help of two staff members, myself, and my brother and sister restraining her, we were able to give Princess a lion cut shave about a month ago. Getting rid of the mats and tangles did wonders, and she has since become a completely different cat.

Princess hangs out on the enclosed cat patio now, comes out of her kennel to hang out with the staff and visitors, and doesn’t even mind being around some of the other cats.

What Princess really needs now, though—to go along with her new outlook on life—is a doting owner who will take the time to brush her fur out every day and let her sleep on the end of their bed or on a sunny window ledge.

While this may not have been the most exciting Cat Friday post, I’m really hoping that by getting the word out about her, the perfect person will come to meet Princess and decide to take her home before that one-year date gets here. Her ideal home would be one without children or dogs, and probably not another territorial cat. Yes, it’s a big request to ask for, but it’s not unrealistic.

If you’re thinking about adopting a cat—or dog—from Spokane Humane Society, your decision will do more good than just providing a home for a shelter animal. Until the end of the month, SHS is donating a portion of its adoption fees to support Cat Davis, a Spokane woman who’s in need of a very expensive, life-saving stem cell transplant. $10 from every dog adoption fee, $5 from every adult cat fee and $20 from every kitten adoption fee will be donated to Cure for Cat, Carroll says.

FIRST FRIDAY: Headed to First Friday? Use our map!

THIS WEEKEND IN MUSIC: Best Friday Ever Edition