See you guys there!

This is pretty much going to be one of the most exciting nights of my cat lady life.

The Internet Cat Video Film Festival is coming to Spokane. Not only that, a very special feline guest is planning to make an appearance...

When this news hit the Interwebs last night, I just about lost my mind. Those who know me — even readers who haven't met me but follow my cat-crazy ramblings here — know why: LIL BUB is my number one, all-time favorite Internet cat in the world. She’s also my second favorite actual cat in the world. Second only to my own darling Alice, of course. On the very rare chance I ever met BUB and her Dude face-to-face, I don’t know if I’d freeze up and become speechless, cry like a hysterical teenager during Beatlemania, or just be super awkward. Probably the latter. 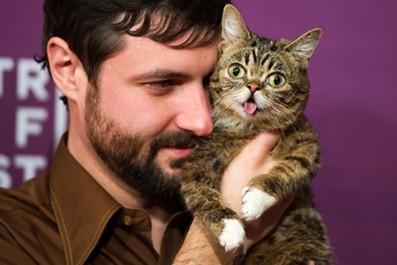 Michael Stewart/Wire Image
Bub and her owner, aka her "Dude," Mike Bridavsky.
The eeriest part of it all? It’s happening on my birthday. I’m guessing not many of you care about this detail, but it’s going to make it one of the best birthdays I might ever have: BUB and cat videos. An entire gathering of fellow Inland Northwest cat people on one night, in one place. I'm not sure that can be topped. GOOD JOB, BUB, for making my birthday awesome!

I just got off the phone with the Knitting Factory’s marketing director in Boise, Jeni Williams, who confirmed that these dream-like events really ARE real, and BUB is coming to Spokane. Tickets go on sale tomorrow, Friday, Nov. 22, at 10 am. It’s an all-ages event and general admission is $20, with a limited number of reserved seats available for $35.

So, other than the obvious indication in the event name, what exactly is an “Internet Cat Video Film Festival?”

The first ICVFF happened in August 2012, at the Walker Art Center in Minneapolis, and was part of the huge Minnesota State Fair. The first and second annual festival both featured screenings of curated cat videos, nominated by the public and selected by a team of judges. Videos like “Cats Playing Patty-cake, what they were saying…” and “Kittens Inspired by Kittens,” and “Cat licking vacuum cleaner.”

This year, the event — referred to as the “cat Woodstock” — was so much bigger it was held at the Minnesota State Fair Grandstands, attracting thousands of cat lovers from near and far to watch 65 of their favorite viral cat vids on the big screen. The fest also included talks and meet-and-greets with several special guest celebricats and cat people, including Seattle’s Will Braden, the creator of the Henri Le Chat Noir series, as well as Spokane’s own Charlie Schmidt, the guy behind the infamous Keyboard Cat video, which some argue helped launch this entire phenomenon.

This year’s ICVFF also featured the official first meeting of famous felines LIL BUB and Grumpy Cat, and we were all truly captivated to see two of the most beloved kitties of all time in the same city, let alone the same room. (Grumpy Cat hails from Arizona, and BUB is from Bloomington, Indiana, in case you didn’t know.)

Also, a helpful side note: Both of these famous kitties are female. I only stress this because if you get their genders wrong in the presence of cat freaks (like me), you might feel kind of silly. So just don't do it. I get mistaken for a guy all the time, too, and I know how these girls feel.

The same collection of videos shown at this year’s ICVFF has been touring the U.S. and the world since its debut in August. Previous stops included San Francisco, Ireland, Montreal, Chicago and New York City. In 2014, after its stop in Spokane, the event will head to Austin’s SxSW arts festival, and later, Portland. More tour stops are being added, too.

My last piece of advice: start looking for the perfect cat attire to wear to this event right meow. I know I’m already thinking about which of my own cat tees to wear…

Keep checking back with Cat Friday HQ for more updates on this super awesome event.