A week ago we wrote about a new bar called the Spokane Downtown Daiquiri Factory that was opening downtown with a questionably named drink on the menu, and since then “Date Grape Koolaid” has drawn protesters, national news coverage and a plea from a similarly named bar in Illinois. (Here's a good recap.)

We honestly did not think we’d still be writing about this now. But Daiquiri Factory owner Jamie Pendleton has continued defending the name and addressing the “haters,” and today posted a website that apparently proves the media should apologize to him for not factually reporting this whole situation. (We are relying on Pendleton's posts on Facebook because he has refused repeated media requests for comment.) 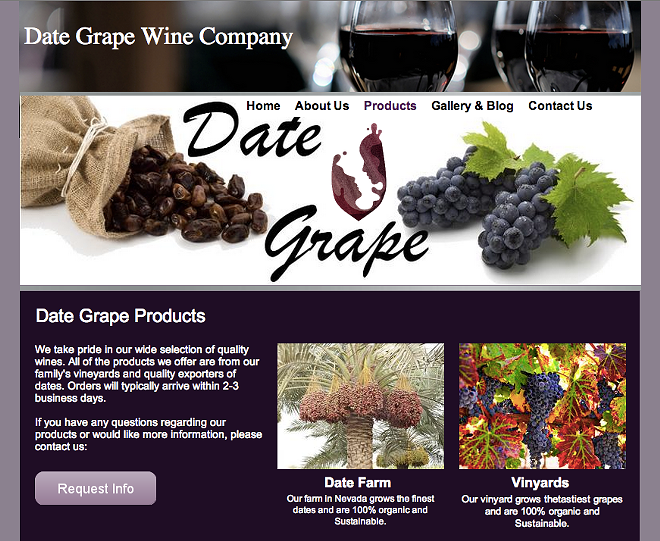 This is so beside the point that we were reluctant to look into it. But we like factual reporting, so we did look into it, and — surprise! — it’s not a real site. To be clear, we see no indication that the Daiquiri Factory had anything to do with setting it up. But there is no Date Grape Wine Company and this site was clearly some sort of (bad) joke that wasn’t meant to be public.

The first clue is that if you go to the main URL — dategrape.com — it asks you for a password. No such security was placed on the subpages, however, so those are visible and indexed by Google. (Anyone making a website ever: Work with a reputable web developer who knows how to keep this from happening!)

The site was created with templates from a company called Homestead, and the domain name was registered last March to someone who obscured their identity. That’s not terribly unusual on the web, but obviously no one wanted to be affiliated with this site.

The Contact page includes an address that clearly leads to an apartment building on a residential street near the University of Colorado campus in Denver. And the phone number uses the 555 area code, a known prefix for fake phone numbers.

So who made the site? We don’t know — and we’re not going to do any more work trying to find out, because it doesn’t matter. The fact is that it’s not a real site, and even if there were a wine company in Denver using dates and grapes, that wouldn’t help to explain why the Daiquiri Factory considers the name “Date Grape Koolaid” more important than compassion for people who do not think date rape is something to joke about.

Meanwhile, a live panel organized by Gonzaga University professor Dan Garrity is planned for tonight at 7 pm, though Pendleton has indicated he does not plan to attend. Another protest is planned for 7:30 pm Saturday outside the business at 121 N. Wall St.