Cats rule the Internet, no matter where you look. And on crowd-funding sites, this sentiment is just as obvious, if not more so because of the complete strangeness to be found, from cat art, cat games, cat clothing and accessories, to even a "cat erotica calendar." For this installment of Cat Friday we present a round-up of some of the coolest and craziest campaigns out there looking for your dollars, right meow.

The Cat-Bath Contraption, or, a plastic storage tote with a cat in it.
3 days left; $7 pledged toward $500 goal.

The person behind the 2015 Cat Erotica Calendar campaign wants to dress up cats in lingerie costumes and pose them on sultry sets to create a calendar of — depending on how you feel about it — creepy or hilarious photos.
21 days to go; $70 pledged toward a $7,500 goal.

Pawtrack is a cat-specific GPS collar by a UK creator that's already reached its funding goal. The page specifically notes: "For Cats. Not Dogs. Not Children. Cats." Sounds like a super cool and helpful product for cat owners who are proponents of letting their kitties outside, but struggle to find peace of mind not knowing where their cats are hanging out.
6 days to go; £18,555 funded of £15,000 goal.

Cats Eat Dogs isn't what you think it is. It's actually a hot dog recipe book inspired by a real-life cat named Tuna who apparently seriously loves hot dogs.
32 days to go; $5 funded toward a $500 goal.

This next one is a Kickstarter staff pick — an iOS game called Cat Boop, with an objective of just what its name implies. Users play as a cat, and using that playable cat's paw, they "boop" pictures of real-life, user-submitted cats on the nose to gain points. Sounds a little too simple and also kind of weird, but hey, it could be cool.
15 days to go; $1,166 pledged toward $3,000 goal.

Catstarter is, in our opinion, a super-legit campaign to fund the publication of a book to be called Cat Is Art Spelled Wrong, examining our culture's utter fascination with cat videos. Along with that, the book also seeks to dissect how humans decide what is good or bad art. It's set to feature pieces by writers like Alexis Madrigal, of The Atlantic, and Kevin Nguyen, who now writes for Grantland, among other pubs, and got his start at I Can Haz Cheezburger.
14 days to go; $4,011 funded toward a $25,000 goal. 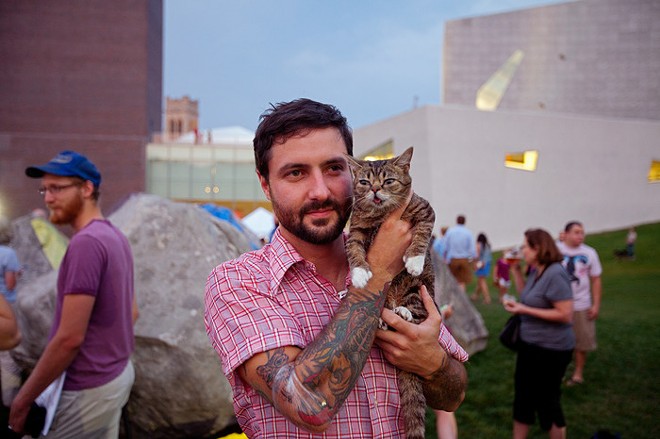 Gene Pittman/Walker Art Center
Catstarter aims to fund a book examining why we love cat videos so much, like anything featuring LIL BUB.